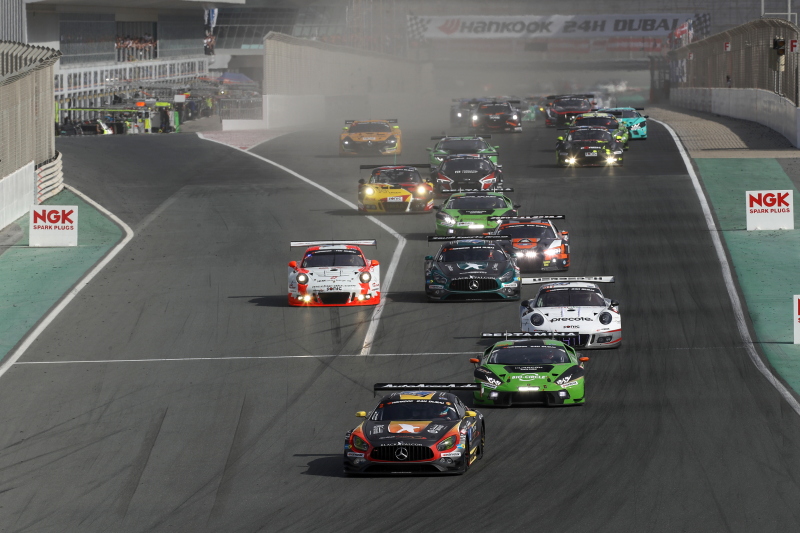 GENNEP (20 December, 2017) – During its most recent meeting in Paris earlier this month, the FIA World Motorsport Council approved the regulations of the 2018 CREVENTIC SERIES powered by Hankook and the calendars of the various series for the upcoming season. Thus, the 24H GT SERIES, the 24H TCE SERIES and the 24H PROTO SERIES, all powered by Hankook, will again have ‘FIA International Series’ status in 2018. Anticipation is rising for the opener of the 2018 season at Dubai Autodrome. “Early this month, containers were shipped from various ports all over the world,” says Daphne Gengler, CREVENTIC’s logistics manager. “Some teams decided to have their cars and equipment shipped from the Circuit Of The Americas in Austin, Texas, after our race there last month. A total of 18 containers were sent directly from there to Dubai. Two containers were shipped from the ports of Nagoya and Yokohama in Japan while the rest, 52 containers in total, were shipped from various ports in Europe. The majority from Rotterdam, but we also have transports from the ports of Árhus in Denmark, Gøteborg in Sweden, London Gateway in the UK, Genoa in Italy and the French ports of Le Havre and Fos-sur-Mer. The containers will be arriving at the port of Jebel Ali in the United Arab Emirates and will be trucked to Dubai Autodrome. As usual, CREVENTIC is taking care of all the logistics and custom facilities, in co-operation with our logistics partner Eimskip.”

While most of the cars and equipment are transported to Dubai via sea freight, some teams have opted for air transport. Among them are the teams with the latest GT4 machines from Audi, BMW and Mercedes-AMG, the first cars of which were only recently delivered to the customer teams. Following a co-operation between CREVENTIC as the promoter of the 24H GT SERIES powered by Hankook and the SRO Motorsports Group, a separate GT4 class will be in place in the series next year. No less than 13 GT4 cars have been entered for the Hankook 24H DUBAI. Another popular category is the TCR class with 16 entries.

A full preview for the Hankook 3x3H DUBAI prototype race and the Hankook 24H DUBAI for GTs, touring cars and 24H Specials will follow in the first days of January. Further information can be found at www.24hseries.com, www.24htceseries.com and www.24hprotoseries.com