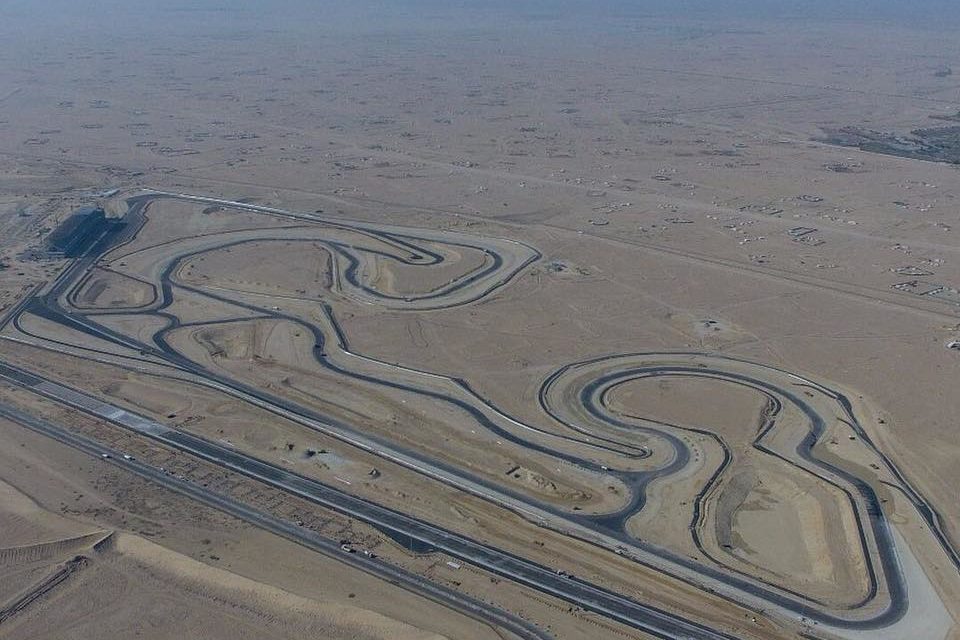 Dec 8th 2017 – It has long been under discussion, (10yrs or so) but in late July this year the go ahead was given under the direction of His Highness the Amir, the Amiri Diwan, for several large construction projects in Kuwait.

One of the most exciting is the new grade 1 FIA, FIM and CIK spec circuit, with an investment of KD 49m/US$ 164m, it will propel Kuwait to the future and elevate it as a major player in the motorsports community allowing the country to host both Formula 1, MotoGP and NHRA Drag races in the future. Along with the SIRBB kart track It marks another significant investment in motorsport venues by the country in recent years and is being designed by Hermann Tilke and built by KCC Engineering and Contracting Company.

The ariel photos given to us today show the speed of the build which started in earnest during August this year, and at present see most of the track asphalt laid, along with the main pits and grandstand. The circuit name is mooted to be Kuwait Motor Town although this could easily change before the opening during the second quarter of 2018 and located 40km south of Kuwait City.

The circuit itself looks fast and technical at a length of 5.6km, with a 20 corner, anti-clockwise 5+ configuration layout to suit various top level events. And within it a ‘Corkscrew’ akin to the one we all love and know at Laguna Seca, also a “Carousel” like the one we know at Nurburgring. It will also boast one of, if not THE longest straights in motor racing with an impressive 1750m in length, much longer than the current calendar F1 straights of Yas Marina(1200m) and Baku(1600m), (also both Tilke designed tracks) and the historic retired F1 track at Fuji(1500m).

There will be a purpose built off-road section catering for MotoX, RallyX, 4×4, and all terrain vehicles along with a training academy and technology and conference centre, along with Hotels and Malls already starting to break ground.

Official news coming out of Kuwait has been scarce, although we did find a quotation on Tilke website.

Kuwait Motor Town shall position itself as a new place making destination with a unique FIA grade 1 circuit as the nucleus of the state of the art facility, which will attract a wide spectrum of people. Whether professional race driver, or families seeking for leisure activities, or club members desiring premium level services, Kuwait Motor Town with its fully integrated portfolio of entertainment assets will create the utmost exciting and innovative automotive experience for the whole region.

Along with the circuit there is underway the Airport expansion, the new $4.5bn airport will have the capacity to handle 25m passengers per year and accommodate all aircraft types through 51 gates and stands more than enough capacity for future F1 and MotoGP visitors.

They should play O Fortuna

Will it be a tragedy or a comedy?

A huge THANK YOU to all our fans around the world! 🙌 ... See Less

For those who can afford SkySports though eh in the UK. Not the rest of us? Well done and congratulations!

The Dutch Grand Prix is going to be a madhouse you've never seen! I bet that'll be a record breaker in viewer numbers

Today the F1 is pretty poor. We like realy fights of cars, pilots and factorys like in the past. These F1 is not good for me. Maybe I not sure to continue to see it.

Really wish ESPN would increase the coverage this year. Last year was nice having all FP, qualifying, and races broadcast, but they cut away from the post-race at Sky Sports F1's first commercial break.

Make it more accessible in the UK. This deal.with Sky is killing us. F1 is the only sport I watch and their fees are unfair

Thank God that Channel 4 F1 exists and provides FTA highlights for UK viewers because the cunts at $ky F1 have nabbed almost all of the live coverage.

Really wish Canada would not get the shitty TSN version. I absolutely hate when you are watching the race and the commericals come on while the race is still running. When Vettle smashed into Hamilton in Baku a few years ago I had to watch that in some tiny little screen in the corner while listening to the same Acura commercial on repeat for 2 minutes.

I hope they’ll show more of the mid pack battles this year and focus on more of the drivers and teams during the races.

Thank you for Fox Sports Asia for the 2019 broadcast from practice sessions to raceday. Top broadcast 💯

Brazil italy uk germany and netherlands biggest markets. Yet no german grand prix?? Almost no british gp until a last minute deal and italy too. F1 continues to want to go to these new fancy street tracks ahead of the old school tracks which promote great racing. It used to be a good balance between the old school circuits and the new. Its now gone too far the other way.

Sounds a little bit fishy. I used to know lots of people that watched it every week it was on before the greed took over and ruined it. I know only know 1 person who pays to watche it.

In Latin America we are bound to the whim of FoxSports, and only the “Premium” (paid) channel have the sunday races live, the others put it after american football or unimportant UFC fights.

These posts are just another platform for those who don’t have it to moan about sky I don’t believe £10 per month is unaffordable I don’t smoke I don’t drink my one guilty pleasure is f1 so I pay for that,most sport is Ppv I pay for my son to have access to wwe,it’s never gonna return to terrestrial tv it’ll always be ppv so get used to it or fork out.

Counted the same viewer 21 times. Just a pity we get the Sky feed with mostly crappy commentators that love the sound of their own voices.

It's just a shame that SKY greedily dug there claws in and took away the free to view on ch4.. Its discusting how they done that to a sport that has been on normal channel's for years free to watch.. 🤬

F1 TV Pro is a great way to watch. $70 for the entire season is a bargain. I quit paying for satellite service and went mobile. Best decision I’ve made in a while.

If only I could subscribe to F1 TV Pro. That's right. I can't. Exclusive deals are cancer.

Shame the tv audience as went down in france to 750,000 according to alan prost. And the british audiences too have dropped. #ditchskysports

How much longer I wonder F1 is become so boring, only time it’s interesting is due to the top three teams having problems during race, or yellow flags ,accidents, allowing the ones who simple make up the numbers getting a chance

Would be more if we could see it in the UK, not everyone can afford bloody SKY

What on pay to view only fork out mega bucks to sky....talk about ball “s...t” bring back free to fiew please!!!!!

Shame you don’t appreciate your fans enough for the races to be broadcast live on free to view channels in the UK!!! 😖😖

And it would have been a lot more if ‘F1 tv pro’ would provide Dutch or English commentary in Belgium in stead of only French, German or Spanish...

Bring it off Sky and back to a free to air broadcaster, and you'll see those numbers jump.