Dubai: Shedden and Vernay lock out the front row for Leopard Racing at Dubai Autodrome 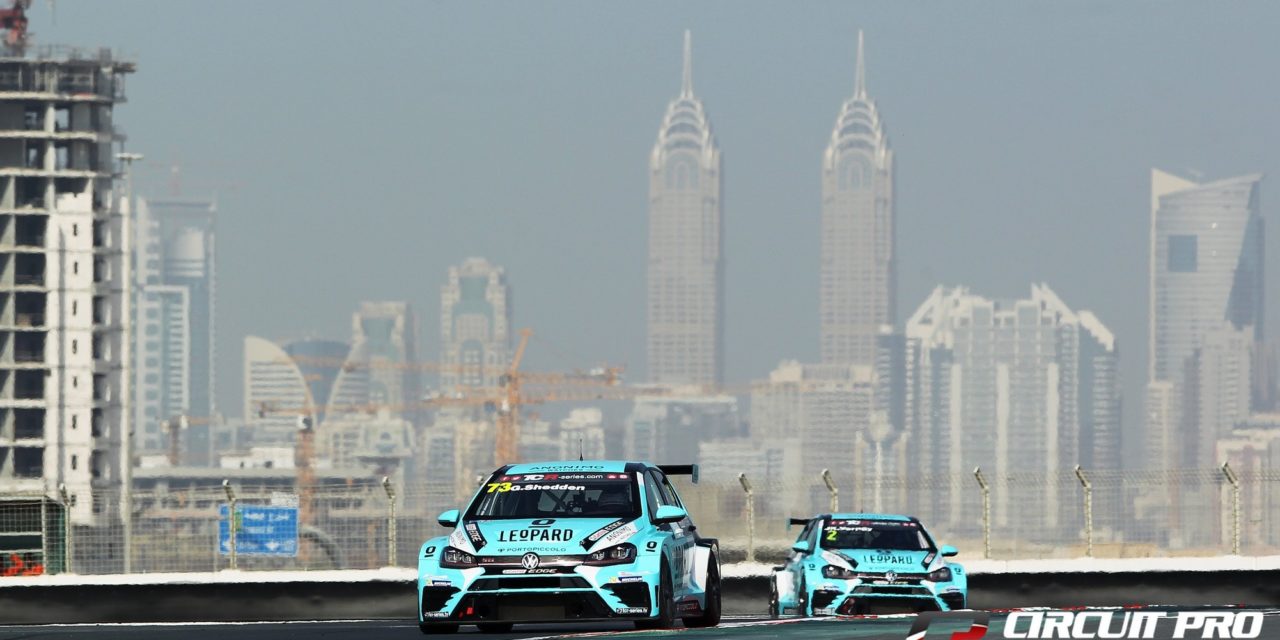 For the second consecutive event, Leopard Racing locked out the front row for Race 1. After Rob Huff and Jean-Karl Vernay qualified first and second in Zhejiang, TCR newcomer Gordon Shedden and Vernay claimed the same result today at Dubai in the TCR International Series finale.

Once again it was an extremely close session, with 17 cars in the same second.
The result also meant that Vernay moved even closer to securing the Drivers’ title. The four points for second place in Qualifying helped the Frenchman to stretch his lead in the standing to 25 points ahead of Attila Tassi, who will start the second race from pole position thanks to the reverse top-ten grid. Now Vernay has a great opportunity to wrap up the title fight in Race 1, especially since the Honda cars struggled to be on the pace with both Josh Files and Roberto Colciago failing to go through to Q2.

On his first TCR appearance, Shedden was able to claim pole position. Using his vast experience in touring car racing, the triple BTCC champion completed a perfect lap in Q2. Which was also something of a surprise, considering that he had been the last driver to make the cut in Q1, only 26 thousandths of a second faster than Files.
Benjamin Leuchter provided the icing on the cake for Volkswagen Motorsport, placing his WestCoast Racing Golf GTI in third position. It was a great result for the young German driver, winner of the TCR class in the VLN endurance series.
The two Hyundai i30 N cars of Gabriele Tarquini and Alain Menu will start both races from 13th and 14th as they are still running with a temporary homologation form and therefore were not eligible to qualify for Q2. They posted the second (Tarquini) and fourth (Menu) fastest laps in Q1 and the whole paddock is curious to see if they will be able to elbow their way through the field, just like Tarquini did in China where he won Race 1.
The first race will start tomorrow at 11:20 local time (live streaming at www.tcr-series.comand www.tcr-series.tv).

Denis Dupont continued to impress and set the fastest lap in the first part of Qualifying, stopping the clock at 1:28.154 under the chequered flag, beating Gabriele Tarquini’s 1:28.403. Benjamin Leuchter set the third fastest lap (1:28.425) ahead of the second Hyundai car of Alain Menu (1:28.431).
Championship leader Jean-Karl Vernay was fifth fastest (1:28.457), while his competitors in the title fight, Comini and Tassi, ranked sixth and eighth respectively.
Several drivers had lap times disallowed for not respecting track limits, including Tarquini, Nash (twice), Morbidelli (twice), Comte, Kajaia, Borkovi? and Files.
With the two Hyundai i30 N cars of Menu and Tarquini not eligible to qualify for Q2, Comte and Shedden (13th and 14th fastest respectively), took the last two places for the second part.
The following drivers went through to Q2: Dupont, Leuchter, Vernay, Comini, Lloyd, Tassi, Morbidelli, Oriola, Vervisch, Nash, Comte, Shedden.
Among those who did not make the cut were Josh Files (with gearbox problems), Borkovi?, Homola (with engine problems) and Colciago,

Dupont was not able to repeat his Q1 performance and qualified in fifth position; he also stopped on the track on his last attempt due to driveshaft failure.
Tassi and Comini posted the 10th and 9th fastest laps respectively so that they will fill the front row on the reverse grid for Race 2.

Quotes after the Qualifying Session
Gordon Shedden (pole position): “It took a lot of time this morning to understand the car, we struggled quite a bit with the set-up, so I wasn’t expecting at all to be on pole. My first very good lap was at the end of Q1 and I went out quite early in Q2 to set up a time that was not beaten. Everything was new for me: the series, the car, the tyres and the team. Everything is quite different from what I am used to, but I am enjoying a lot this first TCR experience. The quality and the level of the series is very high, and the car is fun to drive. I am here to help the team and Jean-Karl, although he is very capable himself. I’m here to do the best job I can for them.”

Jean-Karl Vernay (2nd): “It’s again a great result for Leopard Racing, and I congratulate Gordon for clinching the pole in his first TCR appearance. Not a real surprise, we know what he is worth… Starting from the first row tomorrow will be very good, I just hope we’ll pass first corner unscathed. A strategy is never easy to do, but the key will be to stay patient and be smart. I am confident in our car, in the team and in my ability, so I will approach things avoiding useless pressure.”

Benjamin Leuchter (3rd): “I am very happy to be here and grateful to WestCoast Racing. It’s nice to be back to sprint racing, after a season in VLN. Of course, I know the Golf well but everything in today’s qualifying exercise was completely different from what I have done this year on the Nordschleife. It’s a great result for the Golf cars and after struggling a bit with the set-ups this morning, we found a good compromise, thanks to the excellent work of the team. Tomorrow? I’ll just go flat-out!”

Attila Tassi (10th): “We had a difficult morning, but things went better in Qualifying. I had a good pace in Q1 and could have done better but when I was told on the radio that P10 was secure, I lift off. It will be crucial to start from pole in Race 2 and I hope we can keep the title battle alive until the very end!”