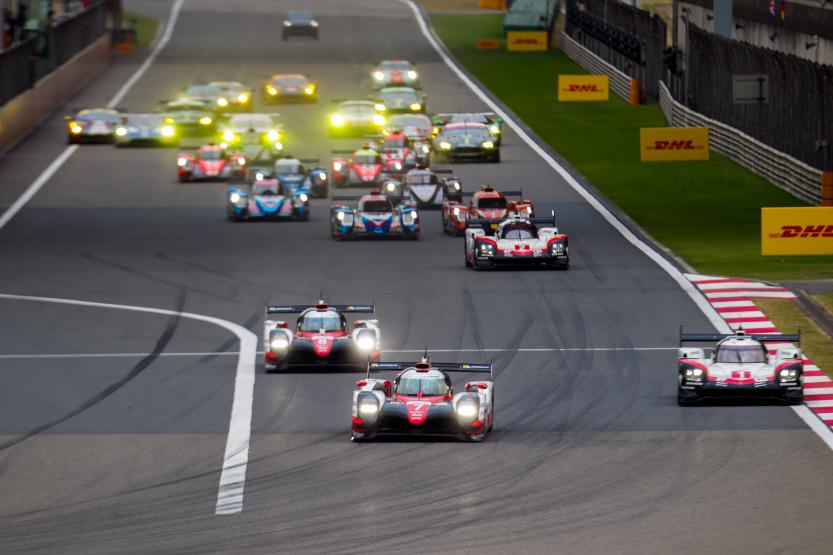 Sun, Nov 5th 2017 – A dominant victory in the penultimate round of the 2017 FIA World Endurance Championship for Toyota was not enough to prevent Porsche from winning the World Manufacturers’ Championship today in Shanghai.

Second place for the No.2 Porsche 919 Hybrid crew of Timo Bernhard, Earl Bamber and Brendon Hartley gave them a well-deserved 2017 FIA World Endurance Drivers’ title with one round remaining. It is Bernhard and Hartley’s second championship title (first in 2015) and Bamber’s first.

Toyota’s No.8 TS050 HYBRID of Kazuki Nakajima, Anthony Davidson and Sébastien Buemi led a convincing display by the Japanese manufacturer, although the result could have been very different in terms of the race result and the championship situation had the No.7 Toyota of José Maria Lopez not clashed with one of the leading GTE Pro cars in the final hour.

The result saw the Japanese car forced to pit and the two Porsche 919 Hybrids move up to second and third, while the delayed Toyota ultimately came in fourth. It was Toyota Gazoo Racing’s fourth win of the season meaning that the eight races have been completely split between the Japanese marque and their rivals Porsche, with one round remaining.

Rounding out the podium in Shanghai was the No.1 Porsche 919 Hybrid of Neel Jani, André Lotterer and Nick Tandy. Their race was compromised in the first hour when Tandy slowed with a throttle sensor issue.

It was an ultra-successful day for Porsche as they also took the FIA World Endurance Manufacturers Championship, and as with the Drivers’ title it was also the third consecutive time Porsche has lifted the trophy.

An enthusiastic crowd of 58,000 spectators over the weekend at Shanghai International Circuit saw a memorable event and went home having witnessed an incredible race which was full of action, drama and tension. One of the best ever LMP2 races was won by the No.31 Vaillante Rebellion squad in Shanghai as Bruno Senna, Nicolas Prost and Julien Canal triumphed for the third time this season.

In a race of incident and excitement Senna laid the foundations for the win which takes him and Canal to the lead of the championship by four points (Prost having missed a race earlier in the year).

Their chief rivals during the race were the Jackie Chan DC Racing trio of Oliver Jarvis, Ho-Pin Tung and Thomas Laurent. The three-time category winners had seemed to have built a race-winning platform after a stellar double stint from Jarvis, but then a fraught final two hours saw a collision between their No.38 ORECA 07 and the No.26 G-Drive Racing car. Damage to the front of their car meant they eventually finished in fourth position.

Runners-up in Shanghai today were the Signatech Alpine crew of Nicolas Lapierre, Gustavo Menezes and André Negrão. Today’s result keeps Menezes in outside contention for the LMP2 Drivers’ crown.

Making it two Vaillante Rebellion entries in the top three was the No.13 car of Nelson Piquet Jr, David Heinemeier-Hansson and Mathias Beche. They recovered from contact on the opening lap to score their second podium position of the season, with Dane Heinemeier Hansson having a particularly strong race. Ford take win after epic duel; Ferrari seals GT Manufacturers’ title Ford scored a hard-fought victory at the 6 Hours of Shanghai today as Andy Priaulx and Harry Tincknell claimed their second LMGTE Pro win of the 2017 FIA World Endurance Championship season. In doing so, the British duo thrust themselves back into championship contention in their No.67 Ford Ganassi Team UK Ford GT.

Priaulx and Tincknell finished ahead of the No.91 Porsche 911 RSR of Frédéric Makowiecki and Richard Lietz, and claimed a second win in as many years at the Shanghai International Circuit. An enthusiastic crowd of 58,000 spectators over the weekend at Shanghai International Circuit saw a memorable event and went home having witnessed an incredible race which was full of action, drama and tension.

The win came after Tincknell performed a heroic rear-guard action when he came under intense pressure from the Porsche in the fifth hour. When Lietz’s 911 RSR was hit by the No.7 Toyota, driven at the time by José Maria Lopez, it freed up Tincknell and he brought the car home to claim the maximum points haul.

Ferrari’s third and sixth place finishes in the class were enough to seal the GT FIA World Endurance Manufacturers’ Championship for the Prancing Horse, the No.51 Ferrari 488 GTE of Alessandro Pier Guidi and James Calado taking the final podium place today.

The GT Drivers’ Championship will not be settled until the final race at Bahrain in two weeks’ time but today’s result in Shanghai sees Calado and Pier Guidi’s lead diminished as the consistent Makowiecki and Lietz axis scored a remarkable sixth podium points score of the season. The gap is now just two points between the two pairs.

One of the two non-finishers in the race was the No.92 of Michael Christensen and Kevin Estre which suffered the cruel blow of an engine failure in the third hour while in the lead of the GTE field. The LMGTE Am category will go also down to the wire in Bahrain as the No.98 Aston Martin Racing Vantage V8 of Paul Dalla Lana, Mathias Lauda and Pedro Lamy took a third win of the season and a 10-point lead in the championship.

The Dempsey Proton Racing run Porsche was third after it recovered from contact with an LMP2 car in the opening hour. Christian Ried, Marvin Dienst and Matteo Cairoli therefore still keep in touch with the Aston Martin trio as the 2017 season reaches its conclusion at the Bapco 6 Hours of Bahrain in two weeks’ time.

The race into the night will be on Saturday 18th November.

The final round of the 2017 WEC season is the Bapco 6 Hours of Bahrain which will race into the night on Saturday 18th November.