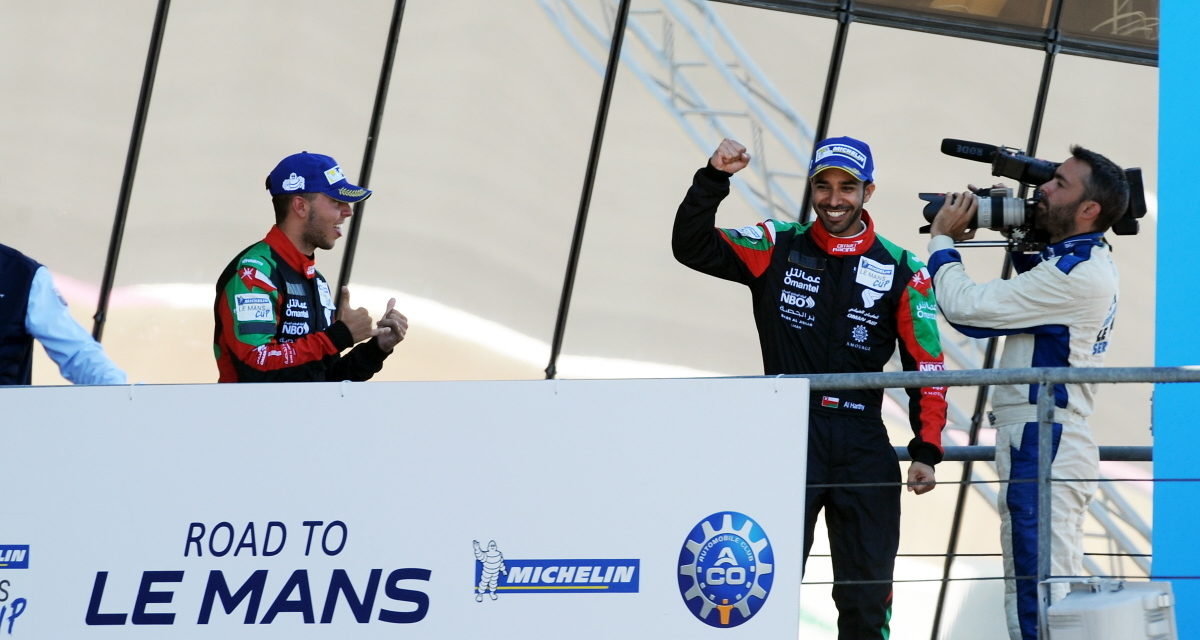 Having scorched to a tremendous GT3 victory during the opening race on Thursday, 15th June, the duo converted pole position in the second 55-minute encounter on Saturday morning into a superb win to secure back-to-back successes in front of hundreds of thousands of spectators.

With the No.97 Oman Racing Aston Martin V12 Vantage GT3, which is engineered by top British squad TF Sport, running like clockwork, Muscat driver Al Harthyenjoyed every second on track and led throughout the opening stint.

Pitting with just over half an hour to run to hand over to Jackson, the Briton rejoined the race in fifth and worked his way through to the lead before being edged back to second. Then, when a rival Porsche received a time penalty as a result of a short pit-stop, Jackson re-took the lead and victory.

“Amazing, what an amazing result”, said an unsurprisingly elated Al Harthy, “To win both races on our debut in the Le Mans Cup is incredible, especially taking the second win on the day of the 24 Hour race itself. Everything was perfect, the car ran so well and the team did an outstanding job. It was a faultless race for us, we were so motivated to convert pole position into a win.

“There has been such amazing support from back in Oman, that gave us even more motivation than we already had to try and win again. I really do want to thank Tom [Jackson] for all his efforts here in Le Mans, we’ve all worked together so well and he played such an important role – huge thanks to him. This experience is something I will always remember, it’s been incredible.”

Following on from the history-making win in race one, and a supreme performance from Omani ace Al Harthy in race two qualifying where he scorched to an absolutely dominant GT3 pole position with a blistering lap time, hopes were justifiably high for the second contest at the 13.6-kilometre track.

While the requirement of yellow flag ‘slow zones’, due to on-track incidents, didn’t favour the Oman Racing entry Al Harthy starred and didn’t put a wheel wrong, remaining out front in control before handing over the car to Jackson soon after the pit-stop window opened.

Jackson entered the race in fifth position in GT3 with 28 minutes to run, albeit with the four rival cars now ahead still all needing to serve their mandatory driver-change stops, and when the race order settled down he held second in GT3.

Following a spin into the gravel for the leading Ferrari Jackson moved through into first place and although passed by the No.76 Porsche, the stop-go penalty for the rival entry enabled Jackson to reclaim the lead on the final lap before going on to seal a wonderful double win.

Off the back of a truly breathtaking weekend in Le Mans for Oman Racing as part of the world’s biggest motor racing event, Al Harthy now prepares to head almost 1,000 kilometres south to Paul Ricard, near Marseille, for round three of the Blancpain Endurance Cup which takes place next Saturday, 24th June.

Reuniting there with regular Oman Racing team-mate Jonny Adam, the duo will go into the halfway point of the Blancpain season leading the Pro-Am championship standings with one victory and one second place finish to their credit from the opening two Blancpain events.