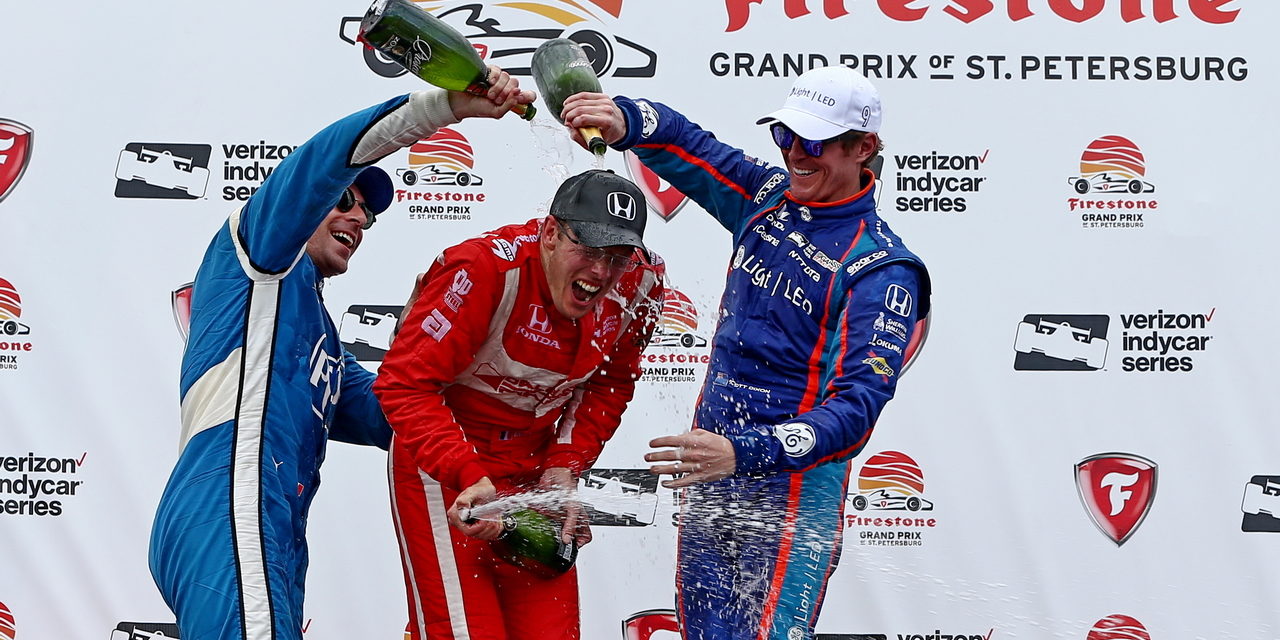 St. Petersburg, Florida (Sunday, March 12, 2017) – Sebastien Bourdais went for a Sunday drive in his adopted American hometown, but it was far from leisurely. The Frenchman charged from last to first to win today’s Firestone Grand Prix of St. Petersburg, the opening race on the 2017 Verizon IndyCar Series schedule.

Bourdais piloted his No. 18 Dale Coyne Racing Honda to a 10.3508-second victory over countryman Simon Pagenaud in the 110-lap race on the 1.8-mile temporary street circuit to secure the 36th victory of his illustrious Indy car career. It moved the 38-year-old Bourdais past Bobby Unser into sole possession of sixth place on the all-time win list.

Bourdais moved to St. Petersburg permanently more than a decade ago and rejoined Coyne’s team this season after leaving it six years ago.

“It’s putting the band back together and hopefully we’ll have many more days like this,” he said.

After crashing his car in the first round of qualifying Saturday, Bourdais started today’s race at the rear of the 21-car field. He had advanced to ninth place when the second and last full-course caution flag waved on Lap 26. When seven cars in front of Bourdais made pit stops under the yellow, Bourdais seized the advantage. He passed reigning Verizon IndyCar Series champion Pagenaud for first place on Lap 37 and led 69 of the last 84 laps.

“Honestly, I’m a little speechless,” said Bourdais, the four-time Indy car champion who now has led 2,526 laps in his career, good for 22nd place all-time. “We had a miserable day yesterday (in qualifying) and that was all me, and today we turned it into a great day. Once you’re in the lead here, it’s awful difficult to lose it unless you throw it away, so I sure tried not to do that again.”

Pagenaud finished runner-up at St. Petersburg for the second consecutive year. The Team Penske driver of the No. 1 PPG Automotive Refinish Chevrolet used the 2016 St. Pete result as a launching pad to his first series championship.

“At the end (of the race), I pushed really, really hard at the beginning of the stint on the (Firestone alternate) red tires to try to come back and get (Bourdais) on the pit sequence,” Pagenaud said. “And I pushed so hard that actually the tires dropped off really quickly afterwards and I couldn’t keep up toward the end of the stint.

“I’m very happy that we finished second, which is where we finished last year, so hopefully that’s good luck.”

Scott Dixon placed third in the No. 9 GE LED Lighting Honda, marking the 90th time the Chip Ganassi Racing driver has finished in the top three and tying the New Zealander with Helio Castroneves for sixth on the all-time podium chart.

The next stop on the 17-race Verizon IndyCar Series schedule is the Toyota Grand Prix of Long Beach the weekend of April 7-9. Live race coverage starts at 4 p.m. ET April 9 on NBCSN and the Advance Auto Parts INDYCAR Radio Network. SEBASTIEN BOURDAIS (No. 18 Dale Coyne Racing Honda, Firestone Grand Prix of St. Petersburg winner): “A lot of things come back. I caught myself thinking about 2003, when obviously we started the opposite. We dominated the weekend, were on pole, cleared the field, then all hell broke loose. I found myself tapping the wall in Turn 8, threw it away. It was kind of redemption day here. To come out on top with obviously a lot of friends and family on-site, the whole community supporting the effort, it was just a great feeling. I couldn’t really be any happier for Honda and Dale for giving me the opportunity to put the band back together and make it happen. Everybody works really, really hard. We’re a small group. There is nobody at the shop that doesn’t travel. But it works. It’s a great little group. We’re sure not going to stop there. We’re just going to keep on trying.”

ED JONES (No. 19 Boy Scouts of America Honda): “It was a good race for us, both myself and (Sebastien Bourdais). It’s great for the team, great momentum moving forward. Tenth for me debut is a fantastic result and it just shows how hard the team has worked over the winter period to develop it and make it stronger and that is all credit to Dale (Coyne) and Honda as well. I’ve learned a lot and can’t wait until the next round (at Long Beach.)