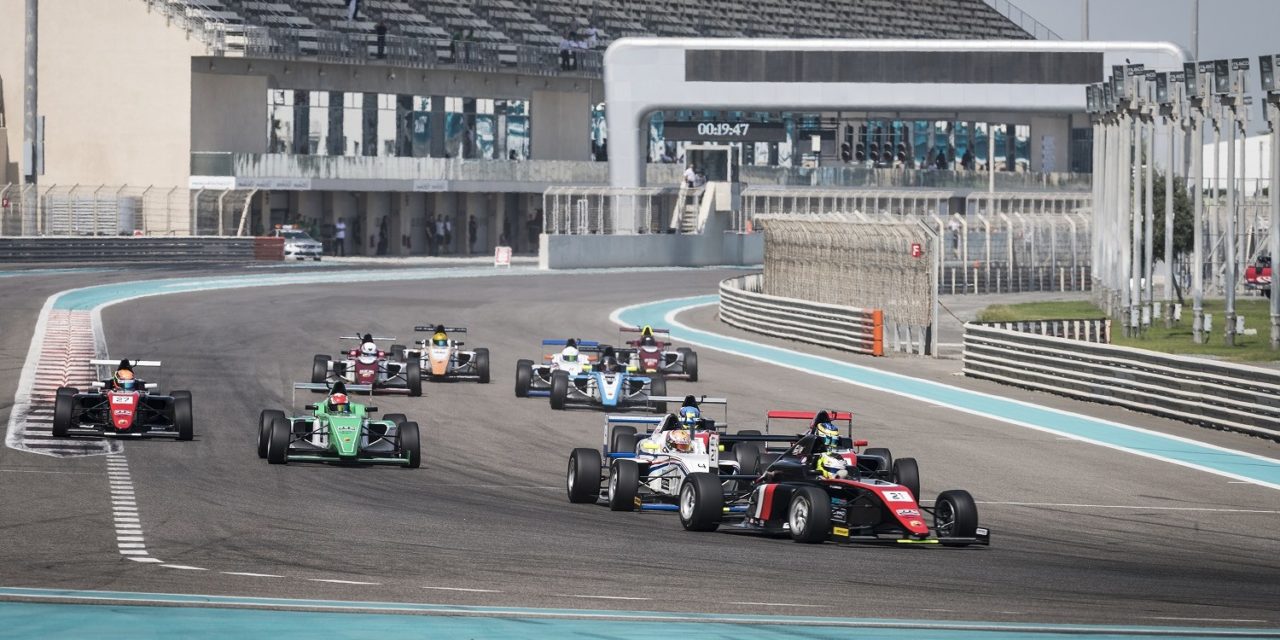 Amassing 14 race wins and two other podium finishes, Aberdein (#21) had been the standout driver of the season and lead the championship standings from the get-go, but not without strong competition from teammate Logan Sargeant (#23). Sargeant finished second outright in the championship thanks to his 15 race podiums, took home Rookie Champion honours, and also helped Team Motopark seal the Teams Champion title for the 2016/17 season.

Having been a rookie in last year’s ADAC Formel 4 Championship in Germany, Aberdein says that winning his first open-wheeler title in the UAE has been the perfect preparation to chase his first European title this coming season.

“F4UAE has been a really successful championship for me and all the experience I’ve gained in the last six months has definitely made me a better driver,” said Aberdein.

“I’ve had some good competition from Logan especially, but overall the competitiveness of the championship has been really strong in the last few events and it’s been more challenging to get the wins. I’m going to be racing a few of the other drivers again in Europe but there’s no reason why I can’t be up the front fighting for the German F4 title this year after all the success I’ve had here in the Middle East.”

Mohammed Ben Sulayem, President of ATCUAE and Emirates Motor Sports Federation, congratulated the championship’s inaugural winners.
“Congratulations to Jonathan for a very strong performance this year and winning the first F4UAE Championship,” said Ben Sulayem. “All of our teams and drivers have improved more than we could expect and they have contributed to making F4UAE the championship that we hope all of the future champions will come to race. We are very proud of all of the winners but I also would like to congratulate the QMMF for being the champion GCC team. We look forward to another great season starting at the end of the year.” EVENT SUMMARY
Round 5 of the 2016/17 season was held at Yas Marina Circuit in Abu Dhabi, the Home of F4UAE, with Races 15 to 18 being run on the 2.345km South Circuit configuration.

The final round saw three new drivers join the grid, with Renault Sport Academy driver Sun Yue Yang from China joining Dragon F4, Leonard Hoogenboom from the Netherlands joining front-running Team Motopark, and Dubai-born Swedish racer Lucas Petersson making his circuit racing debut with the Energy Dubai F4 Racing Team.
Aberdein topped qualifying for the fifth straight round thanks to a time of 59.49 seconds. Aberdein qualified ahead of Sargeant, Rasgaira Motorsport’s Fabio Scherer (#13), Babington and Team Motopark’s Charles Weerts (#25); all clocking their fastest lap times of the weekend and the only drivers to make it inside the 59-second mark.

Race 15 saw Aberdein hold the lead and the top five qualifying drivers remained inside the top five finishing positions, except for Babington who overtook Swiss racer Scherer for third place. Aberdein’s result also gave him enough of a points lead over Sargeant to claim the title early in the weekend.

With Race 16 being reverse grid, Aberdein was able to convert a last place start into a first place finish; the last time he was able to win a reverse grid race was in Round 2 back in December last year. Ben Sulayem started from pole and was soon overtaken by Belgium racer Weerts, who was able to hold on to finish second place and best rookie – his first and only podium since joining the championship in January.  Babington again placed third.

Saturday morning’s Race 17 saw a stellar fight between Aberdein and Sargeant, with Sargeant taking the chequered flag first but was relegated back to second place after stewards imposed a one-position penalty for overtaking outside track limits.

While the final 20-minute race of the season, a reverse-grid Race 18, resulted in Hoogenboom taking the victory in the closest ever finish in F4UAE history. Just 0.121 seconds separated the top three drivers, with Aberdein second and Babington third at the chequered flag, however Aberdein was given a 10-second post-race penalty for overtaking outside track limits which pushed him back to sixth place. In the battle of the GCC competitors, QMMF F4 Team’s Ahmad Al Muhannadi (#22) and Abdulrahman Tolefat (#20) performed their best of the season with lap times now just two seconds shy of the leaders.

Despite a crash in practice, Al Muhannadi went on to win the outright GCC Nations Cup driver standings as well as being the highest finishing GCC driver in three of the four races. In Race 16, the ATCUAE’s Saif Ben Sulayem (#3) – who returned to racing duties for the final round – held his own around the faster frontrunners and took home his first GCC Nations Trophy race plate.
F4UAE END OF SEASON AWARDS

Two additional awards were also presented including the F4UAE Sportsmanship Award, given to the driver deemed to be exemplary in conduct and who best represented the championship and their team (voted for by F4UAE team owners and officials) and the F4UAE Spirit of F4 Award for dedication and service to the growth of the F4UAE Championship (voted for by category promoter AUH Motorsports).

The F4UAE Championship powered by Abarth will now take a summer break from racing in the Middle East, with the 2017/18 Championship commencing later this year. An official calendar plus new championship developments will be announced in coming weeks.

Timo Rumpfkeil, Team Principal of Team Motopark: “We might have won a lot of open-wheel titles in Europe but a championship is a championship and this title will probably be one we remember for a long time because it’s the first F4UAE championship and it’s unique. It’s rewarding to see the team put in a lot of effort to get the cars and equipment here 4,500km from home, we’ve worked with five different driers this season who all did well and all the other teams upped their game this season as the year progressed so it wasn’t an easy win. But our guys really learnt a lot for our upcoming season now in Europe and we only have F4UAE to thank for that.”

Richard Cregan, Team Principal of Rasgaira Motorsports and engineering partner for QMMF F4 Team and ATCUAE: “It’s been great to watch our GCC drivers improve so much in their first racing championship. From being well off the pace at the beginning to now being only two seconds off the pace is incredible progress and it shows that they’ve put in the effort to really learn and take racing seriously. They’re a credit to themselves and we hope they will be motivated to keep at their racing and return next season even stronger.”

Lucas Petersson (Sweden), Energy Dubai F4 Racing Team (#4): “It’s been a big learning experience this weekend racing for my first time in a Formula 4 car or even any car for that matter. It was challenging to learn the new style of braking and using the clutch on the starts, but my lines were pretty good. I managed to push as hard as I could in that last race and we all did amazing this weekend. Sean and the whole team taught me a lot and helped me improve over the weekend and I hope to do it again.”