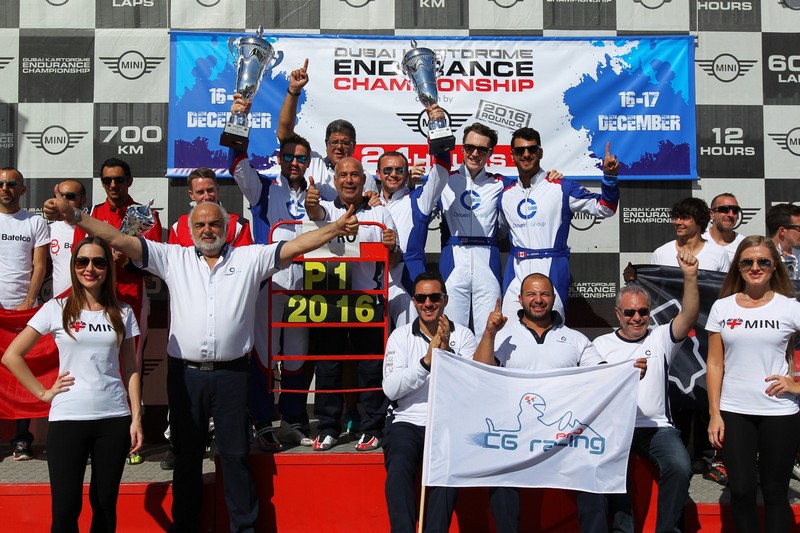 The fourth and final round of the championship developed into a titanic battle between two karting heavyweights, CG Racing Pro and Batelco-Drag 965 Racing.

Batelco-Drag 965 Racing came into the contest seeking to win an unprecedented fifth Pro category championship while the Choueiri Group (CG) was hoping to make history of its own by repeating its 2013 achievement of winning all three categories: Pro, Corporate and the Nations Cup.

Batelco-Drag 965 Racing signalled its intent in qualifying by burning up the timing screens with a best lap time of 1:10.797, which would stand as the fastest lap of the weekend.  Overall qualifying was so close that the next 16 teams recorded times stood within a second of the leader. Kicking off at midday on Friday, racing commenced with the drivers sprinting to the karts, arranged Le Mans style with CG Pro Racing getting the jump on Batelco-Drag 965 in the opening lap.  Over the next hour, however, both teams would trade places in the frontrunner position, with Bin Drai Karting Team chasing in third.

As the race progressed into the night Batelco-Drag 965 Racing started to pull away from the pack and take a comfortable lead.  At that point the crew members of CG Racing Pro knew they had to alter their plans.  With each team required to take at least 24 pit stops and each stop trading in for a new kart, managing time in the pit lane was critical.

CG Racing Pro Team Captain David Terrien said, “We really didn’t have the pace so we decided to try a different strategy which dropped us a bit lower in the rankings with some early pit stops, but then we managed to get into a good rhythm.”

By midnight those tactics started to pay off; CG Racing Pro leapfrogged Batelco-Drag 965 and then slowly built up a gap to the rest of the field.  The Batelco squad made a push of its own but by morning it was unable to chase down the race leader. After 24 hours, CG Racing Pro was first to the chequered flag, earning the team a top place trophy for the race and also for the 2016 Pro Championship with 175 points. Batelco-Drag 965 had to settle for second place silverware in the race while the Belgian outfit of Karting Eupen KCE Misanino took third for the day.

The fighting was extremely close in the Corporate class.  Veteran team Fly Emirates 1 avenged a bitter loss from 2015 when it missed out on the title by finishing 10 seconds behind CG Racing 2 in the final race.  On Saturday, the tables were turned and it was Fly Emirates 1 taking the class victory for Round Four and securing the 2016 Corporate Championship with 170 points.

CG Racing finished just two points down on 168 while its partner team, CG Academy, nabbed third place in the Corporate class with 141 points.

Fly Emirates 1 was down to CG Racing by almost two laps but the team never gave up hope.  Emirates Team Manager Redza Jamil recalled, “I told the guys just keep on pushing.  You never know what’s going to happen and when an opportunity might show itself—and it did.  I’m very proud of the guys.  It’s been an amazing season.”

Another perennial team, LD, finally chased down a title as well.  The all-Russian outfit made the long flight from Chelyabinsk to Dubai for one more attempt at the Nations Cup, and the day certainly presented challenges for the visitors.

LD Captain Dmitry Levin commented, “It is winter in Russia now, so for two months we didn’t practice.  Here in Dubai is it very hot and we are very tired!”

The heat and the competition couldn’t stop the Russian drivers though, and LD placed eighth in Round Four, which gave them 175 points and victory in the 2016 Nations Cup over the Indian team of ENOC-NH 8 on 152 points.  All-Lebanese CG Racing netted third place on 146.

After the trophies were handed out Dubai Kartdrome Manager Ryan Trutch said, “We saw an extremely close battle at the top of the leader board today.  After years of fine-tuning the championship, it now puts the onus on teams to steer clear of penalties, play their strategy right and, of course, have fast consistent drivers.

“Congratulations to the CG teams for taking much of the silverware and well done to Batelco-Drag 965 and Karting Eupen KCE Misanino for fighting to the end.  I would also like to thank my team at Dubai Kartdrome for another excellent effort and to MINI for the continued support.”