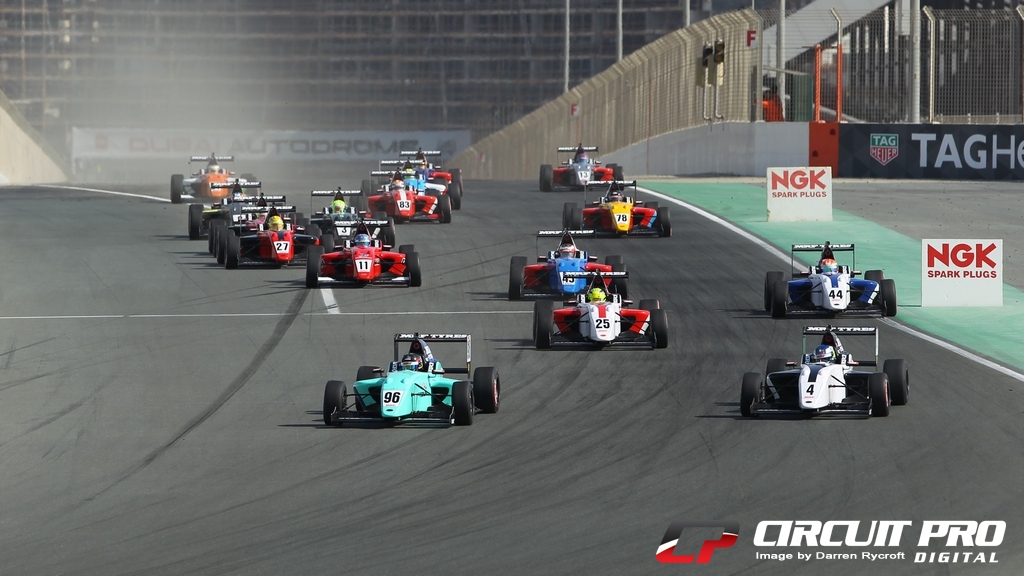 Mick Schumacher was the MRF Challenge championship leader going into the weekend, but the German would be well tested on the Grand Prix Circuit at Dubai Autodrome.

Harrison Newey, who was cheered on by his father and legendary F1 designer Adrian Newey, bagged two out of the four races of the weekend but technical difficulties dropped him from the last race. Mick Schumacher had a third and fourth place finish on Friday, but two retirements on Saturday meant he lost out on a haul of valuable championship points.

After the final race victory Mawson commented, “The whole weekend has just been great. The car has been great all weekend and I really enjoy driving here at the Dubai Autodrome.” Lechner Racing also came to town, bringing with them a squad of race prepared Porsche 911 GT3 Cup cars to line up for two races over the weekend.  Luxembourg driver Dylan Pereira was hoping to extend his lead in the championship, but Ryan Cullen of Ireland and Dutchman Charlie Frijns foiled his ambitions.

The racing was fierce between the three drivers with Cullen winning on Friday and Frijns taking victory on Saturday.  Pereira was always in the mix but failing to get on the podium over the two days cost the driver dearly. Jason O’Keefe and Spencer Vanderpal captured Class One in a Honda EP3.

For any petrol head who might want to see a Ferrari 458 GT3 matched up against an Audi R8 LMS Ultra and a Radical SR3, that’s exactly the scenario that played out on Saturday, with the NGK Two Hour Enduro assembling a collection of GT and Touring Car class vehicles, along with open cockpit Radicals all in one blockbuster race.

Qualifying belonged to the Dragon Racing team, almost breaking the two minute barrier with a best lap time of 2:00.086.  During the race their Ferrari 458 GT3 would be driven by Leon Price, Rob Barff and Jordon Grogor.  Second on the grid would go to one of the AUH Motorsports Radical SR3s, to be driven by Ollie Smith and Dragos Dumitrascu.

The Audi R8 LMS LMS Ultra of K & K Duck Racing only qualified fifth, which meant they would have to negotiate three Radicals ahead of them if they had any hope to challenge the Ferrari.

On the opening lap the Dragon Racing Ferrari got away clean and controlled the pack.  Behind it the Radicals and the Audi fought it out to determine the best of the rest.  In the midst of a scuffle with one of Radicals, the R8 LMS Ultra got spun out and it spent the rest of race trying to catch up.

Meanwhile the Ferrari sailed comfortably home for the overall and Class Three win, while the Radicals behind scrapped it out.  An AUH Motorsports SR3, driven by Johnny Guindi and Romain Sarazin managed to break free and take second overall while also securing a first place trophy for Class Six.

Class Two also saw plenty of action and it was Ashan Silva and Hamad Al Hammadi driving the Lap 57 Honda DC5 who came out on top and stood on the highest step of the podium.  Will Morrison and Julian Griffin nabbed second in Class Two and first in the sub-category Clio Cup.  Jason O’Keefe and Spencer Vanderpal captured Class One in a Honda EP3. When the lights went out to start Race One it was Abdulaziz Bin Ladin who launched his 600cc Kawasaki ZX6R from third on the grid past the leaders and into the front-runner position.  Almuyini closed in on the leader but Bin Ladin held the top spot until dramatic events unfolded in the middle of the race.  A fallen bike and rider in the middle of the pack brought out the red flags and ground the race to a temporarily halt.

The restart was good to Nasser Al Shaiba and he snatched the lead from Bin Ladin and took the victory by 2.185 seconds.  Mahmoud Tannir, riding a Honda CBR600RR, trailed Bin Ladin for third.

Abdulaziz would get his revenge in Race Two.  Al Shaiba started with the lead but was soon reeled in and overtaken by Bin Ladin.  Meanwhile Ahmed Almuyini spent the race chasing down Mahmoud Tannir and finally overtook him on the last lap.

Australian Jordan Oon was relentless over the weekend, taking top accolades in two qualifying sessions and victories in two races.

Alex Karkosik of Poland did his best to unseat Oon from the frontrunner position but had to settle for a pair of second place trophies.  Saudi Omar Gazzaz collected third each time.

The next NRD Power Weekend will be held at Dubai Autodrome on 27-28 January 2017.