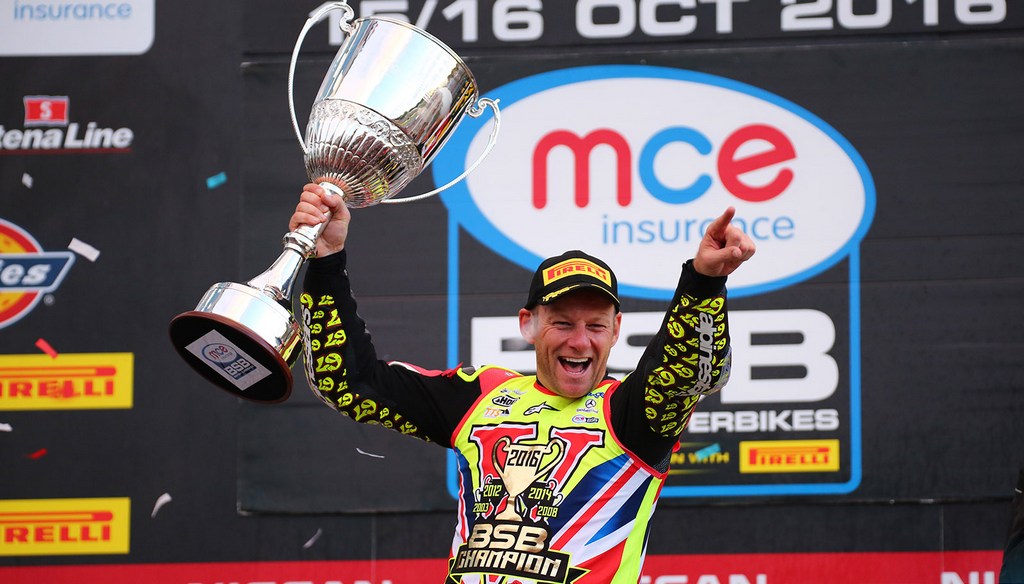 Winning my fifth title will probably sink in later and it’s certainly a weight off my shoulders and whilst I was desperate to end with a win, we signed off with a podium….

Byrne held a 27 point advantage ahead of the second race of the weekend and the Kent contender knew what he needed to do to deliver the title for the Be Wiser Ducati team to strengthen his statistics as the most successful rider in the history of the series.

Ellison had hit the front of the field in the second race of the weekend in drying conditions on the Grand Prix circuit ahead of Christian Iddon and John Hopkins but title rivals Haslam and Byrne were initially languishing outside the top ten on the opening lap.

The pair were on the move and then continued to gain ground, but at the front the leading trio had edged away from the pack and Ellison ensured that he defended hard to hold off his American rival who scored the ePayMe Yamaha team their first podium finish.

Race one winner Peter Hickman was back on the podium for the second consecutive race after Iddon suffered the heartbreak of a technical problem with just two laps remaining which forced him out of third place.

Shane Byrne (Be Wiser Ducati) 2016 MCE BSB champion- “I must admit, it’s a strange feeling to have won the championship with a sixth place finish but to do so with a new manufacturer is a massive achievement for both myself and the team. The conditions in the first race today were very tricky and the bike was strong in the wet part of the track and not so strong in the other parts so it made it very difficult to overtake. Leon came by and I realised I needed to keep one place behind him to clinch the title and whilst he pulled away initially, he gradually came back to me and we got the job done.

“Winning my fifth title will probably sink in later and it’s certainly a weight off my shoulders and whilst I was desperate to end with a win, we signed off with a podium. The whole Be Wiser Ducati team have worked incredibly hard all season long so a massive thank you to them especially my crew chief Giovanni, and team of Kev and Sam.”

Haslam and Byrne had battled the nerves of the title fight to move into fifth and sixth respectively after some hard charging moves on Glenn Irwin, Tommy Bridewell and Jason O’Halloran who dropped to ninth in the closing stages of the race.

Ellison was focused on a repeat performance in race two and he gave it his all to celebrate a double victory to claim third in the overall standings and end his 2016 MCE Insurance British Superbike Championship season on a high in a ten lap sprint  for the third and final race of the season.

The race began with Ellison, Hopkins and Ryuichi Kiyonari duelling at the front of the field, but the race was red flagged when James Rispoli’s Anvil Hire TAG Yamaha suffered a technical problem, leaving an oil line at Hawthorn.

A ten lap restart saw a sprint race to the finish line, again Ellison hitting the lead at Paddock Hill Bend on the opening lap with Hopkins, Kiyonari and Iddon in close contention. Iddon was instantly attacking and on the second lap fired the Tyco BMW ahead of Kiyonari at Paddock Hill Bend, closely followed by a hard-charging Haslam.

Ellison was under pressure from the growing freight train; Hopkins, Iddon, Haslam and 2016 champion Byrne were all battling for the final podium positions of 2016. An incredible scrap went all the way down to the wire with Haslam and Byrne making contact on the final lap in their last dash for supremacy in 2016.

Byrne made it through to third, pushing Haslam back to fourth on the final lap as Ellison celebrated the final spoils of the 2016 season ahead of double podium finish Hopkins for the ePayMe Yamaha team.