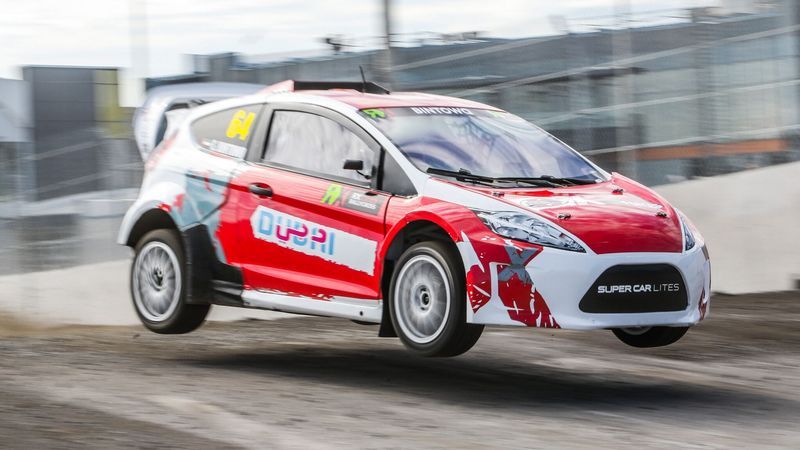 Dubai, UAE, 11 August 2016: Young Emirati Saeed Bin Towq has earned a place in the record books as the first driver from the Gulf countries to gain a podium finish in an RX Lites event at the FIA World Rallycross Championship.

Bin Towq powered his way to a fine second place in the RX Lites Intercontinental Cup held during the World RX of Canada, round seven of the FIA 2016 World Rallycross Championship, at Trois-Rivieres in Canada on Sunday.

The 26-year-old, who is a Motorsport Executive at Dubai Autodrome in MotorCity, said: “It’s a wonderful feeling coming all the way from Dubai. I’m really honoured to be here doing what I love and of course I want to keep doing it and pursue my dreams.”

Bin Towq, competing with Team Olsbergs MSE in the RX Lites Cup, entered the one-make support series for the FIA World Rallycross Championship earlier this year after previously competing in the Middle East Rally Championship and the Formula Gulf 1000 series.

After clinching runners up spot behind America’s Mitchel DeJong in Canada, Bin Towq said: “It was difficult for me in qualifying but in semi-finals we pushed and pushed. In the finals, it was amazing really with the rain coming down half way through.

“It was great fun for everyone and thankfully we managed to keep the car stable and finish second. Canada puts on an amazing race and I love it here because of the fantastic atmosphere.”

Added Bin Towq: “Rallycross is the best of both worlds from circuit racing and rallying, and it’s so much fun. Anyone who has the chance to do it, go for it – it’s proper racing.”

“The RX Lites is a great entry level series for anyone who wants to compete professionally in the FIA WorldRX. There’s so much that you can learn from spending time with everyone from the team and event. The atmosphere, the racing and the family spirit are what I find most attractive in this sport.”

Dubai Autodrome General Manager Richard Birch commented, “We are proud to see one of our own representing the UAE by competing and excelling on the international stage.”

Since making its debut in 2014 the FIA World Rallycross Championship has taken the world of motorsport by storm, drawing top drivers such as Sebastien Loeb, Mattias Ekstrom and Petter Solberg.