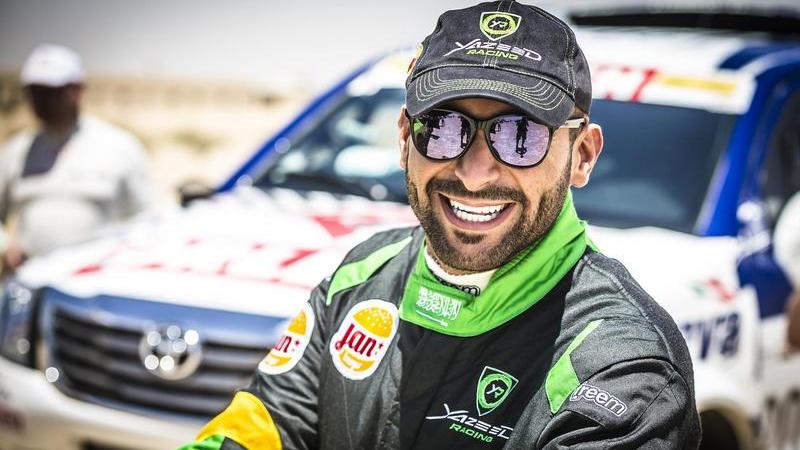 Saturday May 2nd, 2015-OBHUR (Saudi Arabia): Saudi Arabian driver Yazeed Al-Rajhi and his German navigator Timo Gottschalk stayed out of trouble to record a comfortable victory in Rally Jeddah, after the second desert selective section between Al-Buraikah and Khulais, on Saturday.

The Hummer Dbug driver began the day with a lead of 13min 54sec over Motair Al-Shammeri’s Nissan Pick-Up, once results had been finalised and penalties had been added, and extended his advantage to 34min 40sec over eventual runner-up Yayha Al-Helai on the final competitive section through the desert, north of Jeddah city.

It was the Riyadh driver’s second victory in the event in the two years since it was devised by Abdullah Bakhashab and his team, in cooperation with the Saudi Arabian Motor Federation (SAMF).

“It’s always important to support our local events and they are definitely going from strength to strength in terms of support and organisation,” said Al-Rajhi, who finished the stage in 2hr 53min 23sec. “It was another nice home victory for me and a good chance to keep in race practice before we head to Egypt for the Pharoahs Rally later this month.”

The Emirati duo of Al-Helai and Khalid Al-Kendi suffered GPS and tracking issues on Friday and were given a notional time for the opening stage, but they returned with a vengeance in their Nissan Patrol to set the fourth quickest time on the final stage. That catapulted the duo into second overall.

Saudi’s Moneef Al-Sulaimani (Nissan Patrol) moved through the field on the final stage to finish third overall, Ahmed Al-Sabban climbed from 10th to fourth in his Ford Raptor and Ahmed Al-Qashimi rounded off the top five in his Nissan.

Saudi’s Abdul-Majeed Al-Khulaifi (Kawasaki) began the final day with a lead of 6min 13sec over Sultan Al-Masood in the motorcycle and quad category. Last year’s winner stayed clear of trouble to reach the stage finish with the second quickest time and record victory over Al-Masood by the margin of 8min 44sec. Ahmed Al-Nasir won the stage on his Honda 450.

The rally was supported by Mohamed Yousef Naghy Motors (MYN Motors) – Land Rover – and had the backing of the higher committee of Rally Jeddah, which incorporates the General Presidency of Youth Welfare, Jeddah Municipality, the Jeddah Chamber of Commerce and Industry, the Saudi Commission for Tourism and Antiques in the Mecca region and a branch of the Saudi Red Crescent in Mecca. Support was also received from Jeddah police and traffic departments and civil defence administration.

It was a first American victory for Casey Currie as he ran in an overall victory of over 40 minutes. 🇺🇸

Here are the highlights 👇

Two Americans atop the podium! Awesome job Casey and Ricky!

And my love for Dakar keeps on growing and the love for racing. Long live Dakar great job to all who participated to make this the worlds greatest rally. Absolutely amazing!🇰🇪

Hope it's actually red this time.

Are they revealing a new street car or a new racecar?

Looking forward to a better 2020

Ferrari needs to focus on spending money on a winning car to win the championship,not spend money on a launch/presentation at a theater..

Will it have wings?

They better show up..

MM93 ❤ one of the greatest innovators of modern MotoGP racing!

Am I the only one who finds his hyperactive commentating style on a freakin' videogame rather embarrassing?