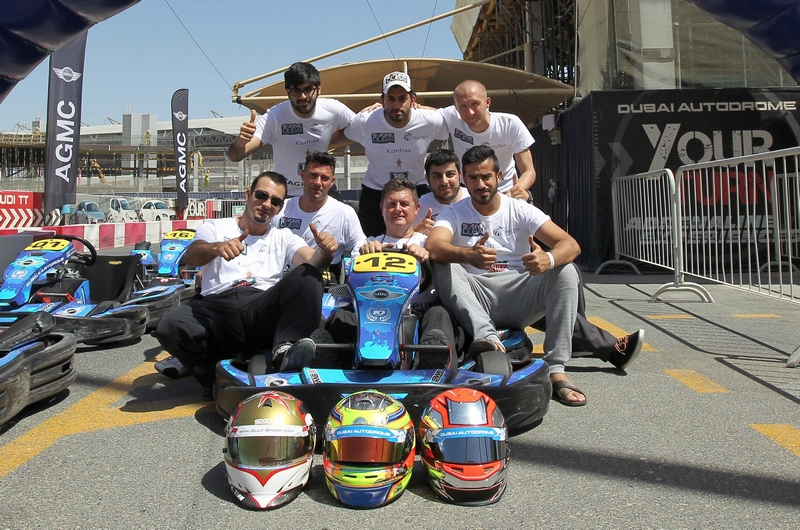 Dubai Falcon Racing Team took a well calculated victory in the Kartdrome 600 Laps kart race, Round 2 of the 2015 Kartdrome Endurance Championship driven by Mini, as they overcame a top field to bag maximum points ahead of CG Racing Pro who chased throughout the race.

With Ali A Mansoori, Sam Zian and Steve Lyall on driver duty and managed by team principal Hadi Al Bloushi, the Falcons kept to their game plan of consistency, speed and no mistakes to post an important victory in their quest for championship honours.

They took the lead early on in the race, which started at 21:00 pm on Friday, and retained the upper-hand through to the end when the chequered flag waved to end proceedings around 10:00 am on Saturday. They completed 600 laps in 13 hours, winning by less than a minute and bagging enough points to put them tied at the top of the championship standings with CG Racing Pro.

Al Bloushi said afterwards: “It was a great result forus after a tough race where we did not know what was going to happen until the last lap. But thankfully we managed to win. I want to dedicate this to all our sponsors and of course His Highness Sheikh Hamdan bin Mohammed bin Rashid Al Maktoum, Crown Prince of Dubai and Chairman of Dubai Executive Council, for making this team happen.”

Having won the opening race in March, CG Racing Pro, with drivers David Terrien, Rami Azzam and Piers Pakenham-Walsh in action, stalked the winners all the way to the flag. Their quest was not helped by a late pit stop penalty, but despite this they fought gamely right to the very end – but when the chequered flag dropped they were 57.172 seconds short of the top step of the podium.

Team boss Pierre Choueiri said: “It was a good race for us first in Nations Cup, first in Corporate, second overall second in Pro and third in overall. So well done to our team we did a great job, especially our Corporate team to get third place overall is a fine achievement. But also well done to Dubai Falcons because they won this one on merit and deserve it.”

“Now we focus on the SWS World Finals next month in Paris where we aim to bring the big trophy back home to Dubai Kartdrome where it belongs,” added Choueiri.
Team Emirates were fourth across the line, which was enough to claim second spot in the Corporate Category with their line-up of Juby Kuriakose (captain), Mohd Zubair, Fabio Davoli and Keith Janaway.

Travelling all the way from South America, RPM Plus Bolivia were given the Spirit of the Competition award for the efforts in their debut at the Dubai Kartdrome event, while Blazing Raptors received the Best New Team Award.

Dubai Kartdrome manager Ryan Trutch said, “Another good event and probably one of the smoothest run events we have had in recent times, with high quality driving and impressive teamwork from all concerned. It was a tight battle to the end and the result ensures that this contest will go all the way to the final race. Congratulations to all who took part, as finishing is victory in itself.”