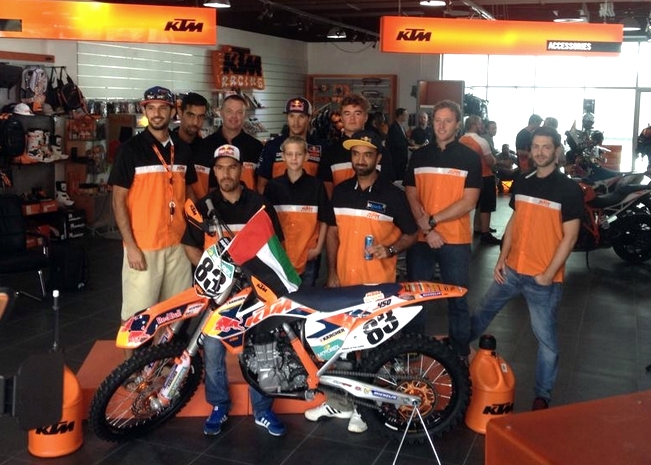 Dubai, 23 September 2014 – KTM, one of the world’s leading sport motorcycle manufacturers, announced its full return to the Middle East racing scene today by unveiling the KTM UAE Racing Team, which includes global and regional racing stars such as Mohammed Balooshi and Sam Sunderland.

In its quest to paint the podiums of the local racing arena orange, the KTM UAE team will be spearheaded by two-time Arab motocross champion and leading Emirati rider, Mohammed Balooshi, and rising international star Sam Sunderland. They will be joined by local, international and Dubai resident riders including Mohammed Jaffar, Abdullah al Shatti, Jake Shipton, Nicolas Kefford, Clinton Wyngard and Jordan Cabaud.

Mohammed Balooshi, a Red Bull athlete, arguably the country’s most successful Emirati motocross rider, started his career in 2002 before being named as the UAE’s best motocross rider just a year later at the Red Bull Super X event held in Abu Dhabi. Balooshi went on to twice claim the title of UAE Motocross Champion, and was victorious in the Arab Motocross Championships in both 2009 and 2010, before becoming the first Emirati to take on the world-famous Dakar Rally on a motorbike in 2012. UAE-based motocross rider and Red Bull athlete, Sam Sunderland began riding at the age of 10; and is a KTM factory team rider. Alongside his engagement with the Red Bull KTM Factory Rally Team, Sam will compete in both local series for the KTM UAE Racing Team this season. At the age of 24, he remains one of the most promising riders in the international off-road racing scene, following his participation in recent Dakar Rally events as well as the Abu Dhabi Desert Challenge, a race that he missed out on winning in 2013, only on a minor technicality. KTM UAE Racing Team rider, Mohammed Balooshi, commented: “It’s a great honour to be part of the new KTM-UAE Racing Team in what promises to be an exciting comeback season for everyone involved, and it is great to be back in KTM orange again! We undoubtedly have a very strong rider line-up across a number of disciplines, and I’m hoping to achieve some great results this season, that will build the foundation for future successes. Having other local riders as part of the team is fantastic, as it highlights the strength of Emirati racing and the talent pool that this country possesses, both now and for the years to come.”

Michael Winter, General Manager of KTM Middle East, said: “KTM has always had a long term affiliation in motorbike racing across the region, and the whole company is highly motivated and proud to be back competing in the shape of the KTM UAE Racing Team. We are delighted with the team that we have put together, and confident of a successful racing season, proving KTM’s ability to perform and compete on all levels.”

KTM is one of the world’s leading sport motorcycle manufacturers with a strong and long-lasting background in off-road racing, which makes the bikes “the weapon of choice”, especially on the challenging terrain here, in the Middle East. The Austrian brand has enjoyed unprecedented success around the world and boasts the current Dakar Rally bike champion as well as numerous world titleholders. KTM bikes also triumphed for a remarkable 13 consecutive years at the Abu Dhabi Desert Challenge from 2001 to 2013