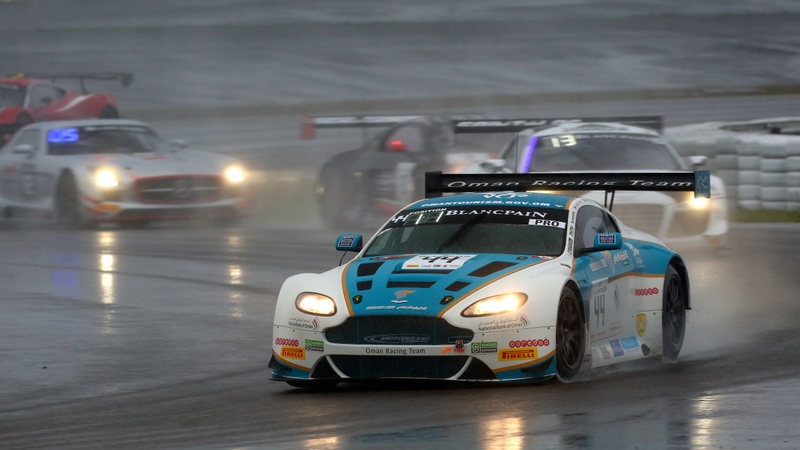 electrical issues with the windscreen wipers only added to the difficulties and cost significant time….

Sun 21st Sept 2014 – Muscat racing driver Ahmad Al Harthy declared himself happy to have seen the Oman Racing Team simply finish the final race of the 2014 Blancpain Endurance Series at Germany’s Nurburgring on Sunday, 21st September, after the most challenging contest of the year – a race blighted by thick fog and heavy rainfall.

Unfortunate contact on the opening lap of round five, the six-hour iRacing.com Nurburgring 1000, put the Aston Martin V12 Vantage GT3 crew on the back-foot from the outset and a subsequent electrical issue with the windscreen wipers only added to the difficulties and cost significant time.

Even so, consistently strong stints from Michael Caine, Ahmad and Joe Osborne – the latter standing in at the eleventh hour for the unwell Stephen Jelley – enabled the Oman Racing Team to battle back from its early woes to end the encounter 11th in the Pro Cup

“Michael [Caine] got caught-up with a Bentley on the first lap, the weather was really terrible – very foggy, rainy and grey, not nice conditions for racing”, explained Ahmad, “It was a matter of trying to keep out of trouble but after the contact Michael had to pit as there was some damage, then we had an electrical issue with the wipers so that meant a 10 minute delay in the pits

“After that, we treated the race as a development run and just concentrated on our pace. After Michael had his two hours, I took over for my two-hour stint and I was very happy with my pace, we lapped consistently and it was very positive. Joe then came in for his run, a big thank you to him for filling in for Stephen.”

Having qualified a season-best eighth fastest, hopes were justifiably high of a top points finish to end the campaign on a real positive but the race had to begin behind the Safety Car due to the treacherous conditions. After 20 minutes, the action proper began with Caine setting about the task in hand but after clipping the No.8 Bentley the Briton had to visit the pits due to a cut tyre.

Climbing from 37th position overall into 31st after the first hour of racing, Caine then had to visit the pits again with the electrical problem which affected the windscreen wipers – undoing all of the good work to that point.

Ahmad got behind the wheel of the car with just over two hours completed and during his stint the Safety Car appeared as conditions remained extremely challenging. Performing strongly and lapping with competitive pace, the 33-year-old handed over to Osborne with just under two hours remaining and the Briton ensured the Oman Racing Team finished 11th in the Pro Cup class – 32nd overall.

“We finished the race, which was great, and we’re glad we ended the season strongly even if it wasn’t the result we wanted”, commented Oman Air, Oman Ministry of Tourism, Oman Ministry of Sports Affairs, Nawras, National Bank of Oman and Al Hashar Group/Aston Martin Oman-supported Ahmad, “This will only go towards making us even stronger and better for the future.”