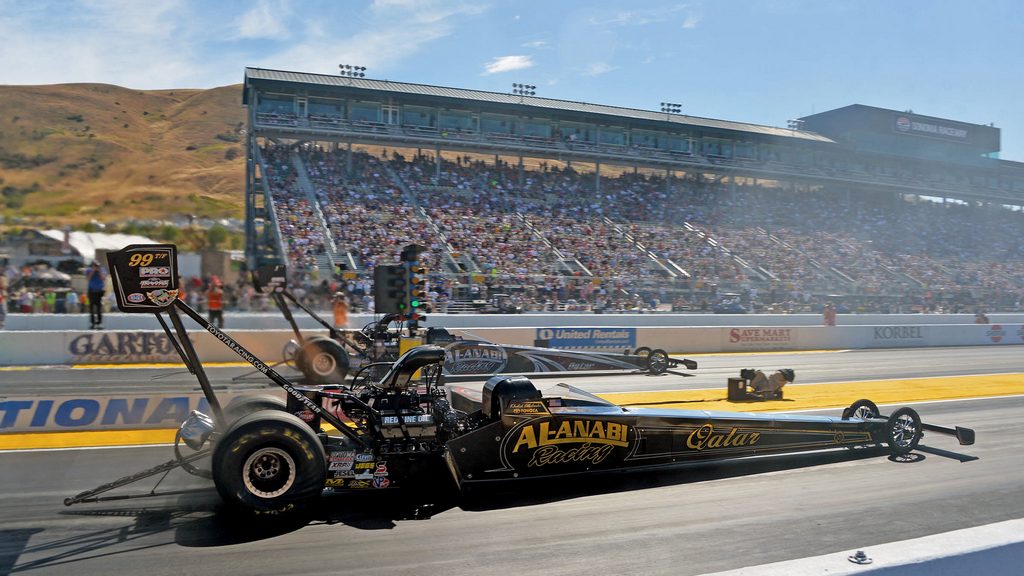 AlBalooshi, who was the No. 8 qualifier, celebrated his 35th birthday on Sunday, and the race win was the perfect present. He was stellar. He defeated Billy Torrence, Clay Millican, Richie Crampton and his teammate, Langdon, on his way to the winner’s circle. It was alBalooshi’s second win in three final-round appearances this year and the fourth win of his three-year Top Fuel career. With the win, he moves back up to eighth place in the NHRA Mello Yello Top Fuel point standings. “Winning on my birthday is very special for me,” alBalooshi said. “Really, I don’t feel much because I was racing my teammate, but this is a very big race for our team. This trophy is the best birthday present I could get, and it came from my crew chief Jason McCulloch and all my crew guys. It was a close race with Shawn. I saw him at half-track, and I thought, ‘Oh No.’ From there, he smoked the tires a little bit, and we won the race. I am very happy. I thank everyone on our team for his hard work, and I thank Sheikh Khalid for giving me this opportunity.”

While he did not get the race win, it was also an excellent race for reigning NHRA Top Fuel World Champion Shawn Langdon. He defeated J.R. Todd, points leader Doug Kalitta and seven-time World Champion Tony Schumacher before losing to alBalooshi in the finals. When he reached the semifinals, Langdon clinched his spot in the Countdown to the Championship NHRA Playoffs. He remains third in the NHRA Mello Yello Top Fuel point standings.

“Overall, it was a good day,” Langdon said. “Our car improved throughout the weekend and we made some big strides going to the finals. This was a brand new car that we were planning to bring out at Indianapolis, but brought it out a little early. It was responding really well. We might have been a little aggressive in the final. We just hazed the tires at about 500 feet. That left lane was a little tricky, but we were confident going in that we could run well in that lane. It was a great weekend for the Al-Anabi team, though, both cars made the finals, so it was a win-win regardless of who won, but I just wish it would have come in the other lane. It was nice to clinch our berth in the Countdown. We would have liked to have the extra points, but we gained on first and second-place and even if we finish third, we can close on that lead pretty quickly.”

The Al-Anabi Racing team will be back in action Aug. 1-3, 2014 at the 27th annual O’Reilly Auto Parts NHRA Northwest Nationals in Seattle, Washington.