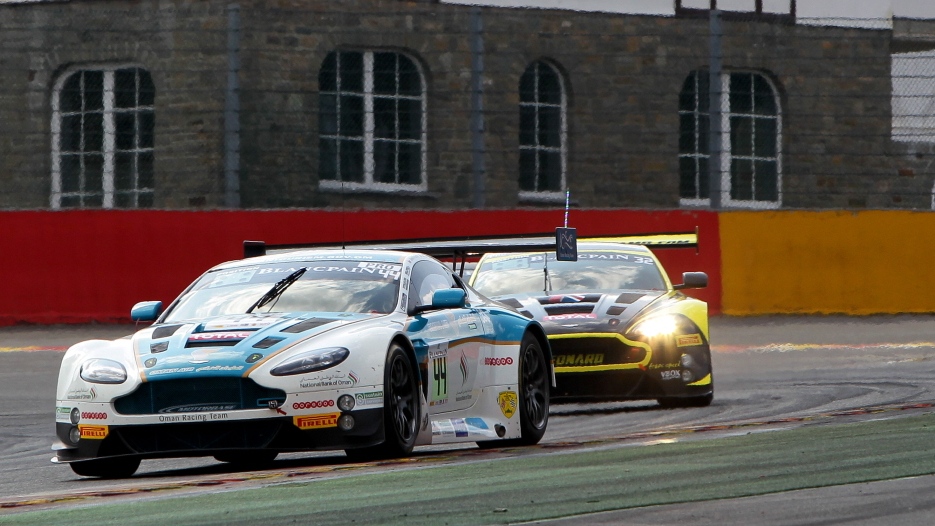 Ahmed had to avoid a McLaren at Blanchimont and had to take to the grass...

Monday, 28th July 2014- Muscat racing driver Ahmad Al Harthy experienced a very dramatic and untimely conclusion to this year’s Total 24 Hours of Spa during the early hours of Sunday, 27th July, when his Oman Racing Team car was involved in an unfortunate accident at one of the fastest parts of the track.

Despite a small issue with the No.44 Aston Martin V12 Vantage GT3 at the start of the prestigious endurance race on Saturday, 26th July, Ahmad and team-mates Stephen Jelley and Michael Caine mounted a terrific recovery as they strived for a realistic top 10 finish.

With the clear pace to potentially mount a front-running challenge, the trio worked hard to bring the Oman Racing Team car through the order from 37th position overall on the grid. Several Safety Car periods led to a very stop-start affair during the early going and the action was even red flagged at around one-quarter race distance after an accident.

When the action resumed, everything ran well for the Oman Air, Oman Ministry of Tourism, Oman Ministry of Sports Affairs, Nawras, National Bank of Oman and Al Hashar Group/Aston Martin Oman-backed squad and confidence was high as all three drivers enjoyed strong stints.

Then, at around 02.00 local time on Sunday morning, Ahmad had to take swift avoiding action when a slower car which he was catching lost control at Blanchimont. The resulting trip onto the grass led to an impact with the barriers and the damage caused meant the No.44 car was out on the spot.

“It was a really unfortunate accident”, said a frustrated Ahmad, “We know these things can happen in motorsport though. We had good pace, I was catching the slower McLaren at Blanchimont but then he lost his car and it was a case of not knowing whether it would spin right or left. I had to take to the grass and that was it, race over for us.

“There was nothing I could do, you just have to be pleased everything is OK and although there’s a lot of work to be done on the car, Motorbase [the crew behind the Oman Racing Team] is the team you want in your corner. They’ll get everything sorted out for our next race. I would like to say a big thank you to the marshals and circuit staff for helping me and being so professional.”

While obviously disappointed with his all-too-early conclusion to the fourth round of the Blancpain Endurance Series, 32-year-old Ahmad takes away a great deal of positivity from Spa knowing the pace which the squad had at its disposal.

“We were running our race until the accident, there was a small issue at the start but that was fixed in three minutes”, he added, “After that we were playing catch-up but Michael and Stephen did a great job and I was happy with my pace. I really think we could have had a top 10 finish with how well we were coming through the order. These things happen though.”

Germany’s Nurburgring will host the fifth and final round of the 2014 Blancpain Endurance Series over the weekend 20th/21st September. Before then, Ahmad and the Oman Racing Team will be back in action in the Avon Tyres British GT Championship for round six of its campaign, on 30th/31st August at Brands Hatch Grand Prix Circuit in the UK.