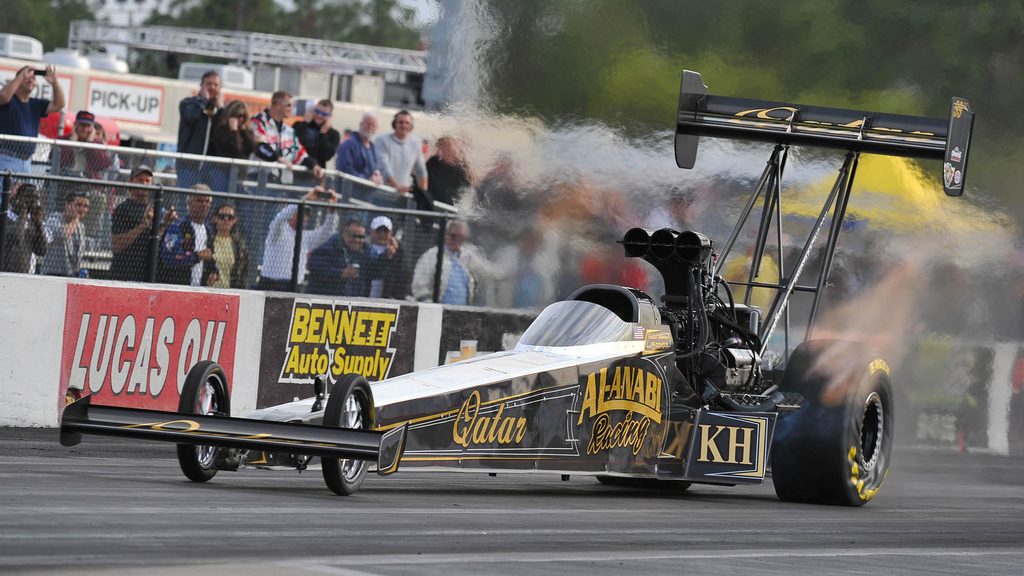 February 5, 2014-Pomona, California – His improvement between his first and second seasons was truly remarkable. Now, Khalid alBalooshi is set to begin his third Top Fuel season for the Qatar Al-Anabi Racing Top Fuel Team, the three-time and defending World Championship team owned by His Excellency Sheikh Khalid bin Hamad Al Thani. AlBalooshi and teammate Shawn Langdon begin the team’s title defense this weekend at the 54th annual Circle K NHRA Winternationals in Pomona, California. It is the first of 24 races making up the United States’ 2014 NHRA Mello Yello Drag Racing Series. Qualifying is set for Friday and Saturday with eliminations scheduled for Sunday.

AlBalooshi won the 2011 NHRA Pro Mod Championship, his fourth Pro Mod title, and then made the very difficult switch from driving Pro Mod to driving Top Fuel. Despite a steep learning curve, alBalooshi won a race and finished 11th in the final point standings in 2012, his rookie season in the 8,000 horse power gold Qatar Al-Anabi Racing Top Fuel car.

In 2013, his second season in Top Fuel, alBalooshi made great strides winning another race and recording two runner-up finishes as well as four semifinal showings. He qualified for the Countdown to the Championship NHRA Playoffs and finished eighth in the final point standings – pretty good for a second-year driver. But the real proof of alBalooshi’s improvement is most clear in the number of round wins he claimed each year. In his rookie season in 2012, alBalooshi won a total of 14 rounds of racing competition. Last year, he won 25 rounds of racing, and that increase is an astounding 79 percent improvement.

“The 2013 season was very good for the Al-Anabi team and for me,” alBalooshi said. “We won another race and finished eighth in the season. It was good, but it was just, for us, the next step. It is a process, and I know our team is ready to be even better this year.”

Last month, the Qatar Al-Anabi Racing Team travelled to West Palm Beach, Florida for pre-season testing. Most of the top teams attended this six-day test session where teams made several runs each day in preparation for the upcoming season. AlBalooshi’s gold Al-Anabi dragster was fast – he made many of the quickest runs of the week, and when it was over, alBalooshi had recorded the third-fastest pass of the week behind the last two NHRA Mello Yello Top Fuel World Champions: his teammate, 2013 champion Langdon, and 2012 champ Antron Brown.

“Last year at Pomona (in November), Jason (crew chief Jason McCulloch) told me he found some problems with our car that have been fixed now,” alBalooshi said. “Jason told me, ‘Balooshi trust me, I found the problems.’ And when I got to testing in Florida (last month), I had a way better car. It was just like he said it would be, and I can’t wait to drive the car in the races this year.”

AlBalooshi’s gold Al-Anabi dragster is radically different from last year’s design. Created by Roland Sands Design, the new graphics feature gold images on a black background with a chrome finish on the top of the body.”

“Our car looks different this year,” alBalooshi said. “When we go to the starting line, everyone will know it is the gold Al-Anabi team – it will be easy now to know if it is Shawn’s car or my car. I am excited about the new season; we have a great hot rod, and I hope our team will win a lot of races this year.”

Al-Anabi Racing operates out of multiple locations in both the United States and Qatar. In the United States, the Brownsburg, Ind.-based operation is a two-car NHRA Mello Yello Drag Racing Series team that is managed by Alan Johnson Racing. Sheikh Khalid’s initiative has created increased international awareness of the State of Qatar while highlighting the nation’s international sports outreach. Alan Johnson is a 15-time NHRA champion in various capacities including crew chief, team owner and team manager. For additional information on the Al-Anabi Racing Team, team manager Alan Johnson or drivers Khalid alBalooshi or Shawn Langdon, please visit www.alanabiracing.com.