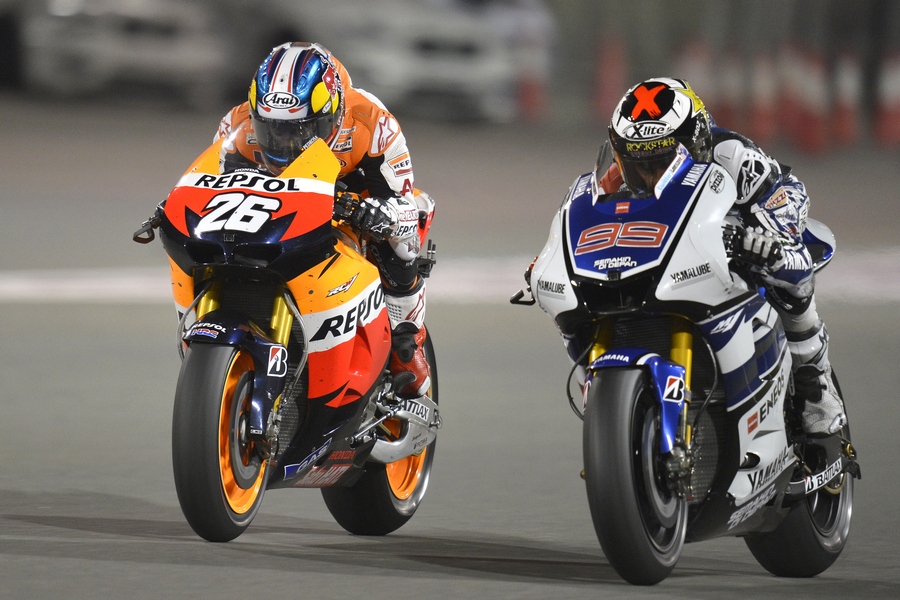 Pedrosa and Lorenzo at Losail in 2012

Losail, Doha – This Thursday sees the long wait come to an end and one of the most eagerly awaited MotoGP™ Championship in years get underway at the 2013 season opener under the floodlights at the Commercial Bank Grand Prix of Qatar.

Yamaha Factory Racing’s reigning world champion will have a tough task ahead defending his title this year, not only in the face of tough competition from Repsol Honda Team rival Dani Pedrosa, but also from an on-form returning teammate Valentino Rossi. Throw exciting rookie Marc Márquez into the mix, who has already shown masses of potential on his Repsol Honda, and the season is set for some fantastic battles.

The satellite Yamaha and Honda contingent is looking stronger than ever after some highly competitive pre-season testing, where in fact Monster Yamaha Tech 3’s Cal Crutchlow ended the final Jerez test on top. His fellow countryman and rookie teammate Bradley Smith has already shown he is adapting well to his M1, whilst LCR Honda MotoGP’s Stefan Bradl, last season’s Rookie of the Year, looks set to be fighting for podium positions from the off. GO&FUN Honda Gresini’s Álvaro Bautista, who unfortunately damaged some fingers in a crash in Jerez, will also be one to watch in Qatar, as he looks to have found some favourable settings on his RC213V.

Jorge Lorenzo – Yamaha – “I am very excited to return to Qatar and begin the season. The testing has been good, we have good pace and we are quite happy with our performance. We still have some areas to improve but our situation is not so bad compared to our competitors and I think we can fight for the win. Jerez was a good point for us after testing in Austin; that was a new circuit where maybe we haven’t yet found a perfect feeling. In Jerez we were able to make a long run and all the Yamahas were on top; that gave us some extra motivation before travelling to Qatar. It also shows that every track is different and it’s going to be an exciting Championship. I want to keep the crown but it’s going to be hard. There are some great riders this year, I was surprised by Marquez’ pace and also with Valentino on his return to Yamaha. Dani is also so strong after the last part of the 2012 season. We will fight really hard from the first race, I believe we are in good shape for that. Losail is a track where we usually find a difficult track surface, plenty of sand and because of that it is always very tough with the tyres. We will see how we can perform there. I am feeling very fit and ready so I want to start!”

The Ducati Team may not have lit up the pre-season after its management reshuffle, yet has arguably made some very big strides following a very tough first 2013 test. Factory riders Nicky Hayden and Andrea Dovizioso will line up on the new Desmosedici that features a greater mass centralization among other upgrades, and will both hope to build upon their increase in pace throughout the season. Their satellite riders, Ignite Pramac’s Ben Spies and Energy T.I.’s Andrea Iannone, both on factory bikes, could prove a threat, as the Italian has proven capable of some strong performances, whilst Spies is yet to show his full potential due to a recovering shoulder injury.

Valentino Rossi -Yamaha – “I’m very happy with the work done in Jerez and over the winter. I was fast and everything worked fine and we have a competitive bike to fight for the podium. I believe that in Qatar will not be so easy; it is a track that is a little difficult for me, but I think I can defend myself and get a good result. I would like to get on the podium: that’s my goal. After the testing I know I can be competitive in some tracks but also that I will have some problems in other tracks. The most important thing is that now I have a good feeling when I ride my M1 and this will help me at all tracks, including Qatar. Every year you get a little bit nervous at the beginning of the season. It’s normal to feel like that; it’s crucial to get some good points and not to make mistakes. I can’t wait to start this 2013 season.”

As the CRT class enters its second year, its collective performance has already improved drastically, and will be further aided by the use of the spec Magneti Marelli ECU by some. The Power Electronics Aspar duo of Aleix Espargaró and Randy de Puniet had seemed like the certain favourites, but with impressive showings from the likes of Avintia Blusens’ Héctor Barberá in testing, it will make an unpredictable spectacle. And with Barberá’s teammate Hiroshi Aoyama, NGM Mobile Forward Racing pair Claudio Corti and Colin Edwards, Came IodaRacing Project’s Danilo Petrucci and Lukas Pesek, Cardion AB Motoracing’s Karel Abraham, GO&FUN Gresini’s Bryan Staring, as well as Paul Bird Motorsport’s Yonny Hernandez and Michael Laverty all in the mix, 2013 promises some fireworks. In addition to this, the class is strengthened by a softer-spec rear tyre option, which will solely be available to CRTs.

Another big change is this year’s brand-new qualifying format. The timesheets of the three practice sessions will be combined, from which the ten quickest riders will immediately pass through to Q2. Prior to that, the rest of the field will contest Q1 in order to fill grid positions 13 and downwards; the best two riders in Q1 will be awarded an entrance to Q2, providing a top-12 showdown for the first pole position of the year.

Andrea Dovizioso – Ducati Team “Losail is a good track for me, as I’ve always had good races there, and I think that the Ducati’s strengths can work in Qatar. We head to this race determined to do well. We know that our pace isn’t so far from the others’ on new tyres, so we should certainly be able to fight for a good grid position, but we have a significant gap to make up in race configuration. Unfortunately we weren’t able to do a race simulation in the tests, so tyre wear is a question mark for me.”

Nicky Hayden – Ducati Team “I’m very much looking forward to starting another season. Of course I wish we were going into it with more speed and consistency, but I feel like we’ve made progress at every pre-season test. The team has used the dry track time we’ve had very well, and we were able to get more out of the recent Jerez test than I thought we would, considering I’d just had wrist surgery. The Qatar track is smooth, which should suit our bike well, and racing under the lights at the first round is always very unique.”

As Moto2™ embarks on its fourth season once the red lights go out in Qatar for the Commercial Bank Grand Prix of Qatar there will be one favourite on people’s minds in the form of Tuenti HP 40’s Pol Espargaró.

And whilst pre-season testing has confirmed the hype, it has also shown a raft of new and old contenders that once again promise to be at the sharp end and challenge for a win in one of the tightest fought championships in the world. Compatriot Julián Simón on his Italtrans Racing Team Kalex, as well as Mapfre Aspar Team Moto2’s Nico Terol on his competitive 2013 Suter already look like contenders, whilst Marc VDS Racing Team’s Scott Redding and Italtrans’ Takaaki Nakagami will certainly be in the mix.

The NGM Mobile Forward Racing Team lines up with a strong package this year, as it fields four riders on a Speed Up chassis in the shape of Alex De Angelis, Simone Corsi, Mattia Pasini and Ricky Cardús. Having shown glimpses of good pace throughout testing and a raft of data to share, the team is one to watch as the championship gets underway. Interwetten-Paddock’s Tom Lüthi, who last year was leading the race for a period, has not recovered from his big crash in the Valencia test, and is replaced by returning Sergio Gadea.

The field also sports some promising rookie prospects, most notably 2012 Moto3™ World Champion Sandro Cortese, who lines up with his newly formed Dynavolt Intact GP team on-board a Kalex, and Tech 3 Racing pair Danny Kent and Louis Rossi. And with a newly enforced minimum combined bike and rider weigh of 215kg for 2013, the narrowly aligned class is only going to get even more exciting.

The hard-chargers in Moto3™ will descend on Qatar for only the second time since the class’ introduction last year, and will arrive with yet further promise and high expectations.

With some of the closest racing witnessed in 2012, and further improvements to the bikes across the class during pre-season, the 2013 season opener under the Losail floodlights in eagerly awaited. Red Bull KTM Ajo’s Luis Salom finished Jerez testing fastest, and with Estrella Galicia 0,0’s Alex Rins and Team Calvo’s Maverick Viñales close behind, the KTM has been confirmed as the package to beat. Viñales will start in Qatar with a slight handicap as he lost a fingertip during the final test, yet he will still be viewed as one of the season favourites.

Rins’ teammate Alex Márquez starts the season in from as well, and will be hoping to emulate the success of his older brother Marc in the lower classes. Fighting with the front runners will also be Mapfre Aspar Team Moto3’s Jonas Folger, who finished last season very strongly, whilst San Carlo Team Italia’s Romano Fenati will be hoping to repeat, or better, his second place at the Qatar circuit from last year. Throw into the mix a reshuffled Mahindra Racing team with Suter-developed technology and a strong rider line-up with Efrén Vázquez and Miguel Oliveira, and he list of potential winners is a long one.

Salom’s teammates Zulfahmi Khairuddin and Arthur Sissis or Racing Team Germany’s Jack Miller and John McPhee all have the possibility to be in the mix after impressing in testing, whilst with newbies such as Red Bull MotoGP Rookies champion Florian Alt on his Kiefer Racing bike or Marc VDS Racing Team’s Livio Loi, the season opener promises to be spectacular.