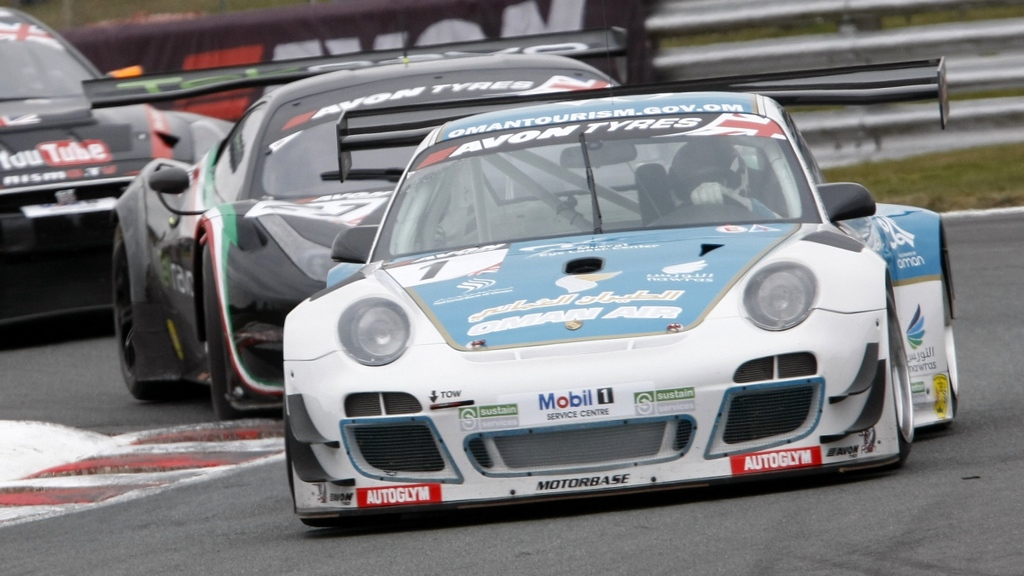 Making a strong impact on the prestigious endurance racing category during qualifying on Saturday, securing an excellent third on the grid for the first of the one-hour encounters, the 31-year-old from Muscat was equally competitive in race conditions and delighted with the whole team effort.

Untroubled, the 2012 Porsche Carrera Cup GB Pro-Am 1 Champion pulled out a healthy gap over the chasing pack and held onto the podium placing until making the mandatory driver-change stop at mid-distance.

Great work by the pit crew enabled Caine to join the track in 10th place and he fought his way back through into fourth, tantalisingly close to the podium – just 0.8 seconds shy at the finish behind the best-placed Mercedes AMG SLS which held the Briton up during the final 12 laps.

“It’s been a very, very positive weekend for us”, said Ahmad, “It’s been extremely challenging, of course, but I’m delighted to have started my GT career so well with two good results. We knew we had a strong race car, fourth was a really good result from the first race, and the team did a good job with the pit-stop. Michael [Caine] worked his way back through very well with some great laps.”

Caine took the opening stint for round two which was set to be a major challenge for Oman Air Motorbase starting, as they did, from the ninth row of the grid. Moving into 17th position on lap one, Caine again became stuck behind slower cars – this time a Mercedes and McLaren P4-12C.

With that in mind, the team took the wise decision to make the driver-change stop as soon as the pits opened and so Caine peeled off the circuit on lap 17 to hand over the Porsche to Ahmad. Joining the track in 20th place and with plenty of work to do, the Omani made great progress and broke into the points-paying top 10 just prior to the emergence of the Safety Car on lap 28.

Racing eventually resumed for a two lap sprint to the finish, Ahmad holding on to the hard-earned 10th place to cap a great drive and a wonderful debut weekend in British GT. Post-race, an amendment to the result was made by officials, elevating the Oman Air Motorbase car to ninth.

Notably too, the endurance racing rookie adapted very well to the characteristics of the Avon Tyres this weekend having spent his entire career in the UK, in both single-seaters and Porsche Carrera Cup GB, on Michelin rubber.

“Race two was very difficult at the start”, he explained, “Michael had to work really hard to try and gain some positions from so far down the grid and he was held up quite badly. When he handed the car over to me I had a lot of work to do, but I did exactly what the team told me and we managed to climb into the points which was great. Our early pit-strategy worked very well.” “I really am very grateful to everyone who came to Oulton over the weekend to support me”, he added, “There’s a family from Oman, who are currently in Cardiff, and they drove all the way to see me race, it was great seeing them. It was a pleasure to welcome Ali to Oulton Park too, we’re both very proud to represent Oman in the UK in our respective sports.”

Ahmad now has a five-week break from action with round three of the 2013 Avon Tyres British GT Championship taking place at Rockingham, in Northamptonshire, on Monday, 6th May.