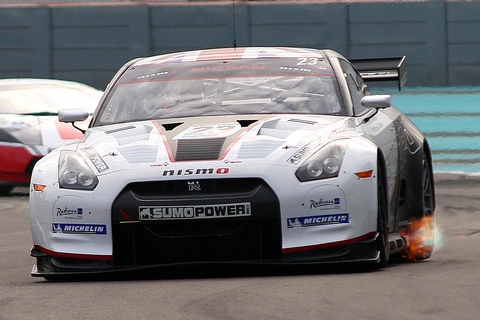 The Sumo Power GT team emerged from its first ever race weekend in positive mood, having brought its two Nissan GT-Rs home in both FIA GT1 World Championship races, finishing 11th and 13th in the first ‘Qualifying’ race and 12th and 16th in the second ‘Championship’ race, at the spectacular Yas Marina Circuit in Abu Dhabi.

Even with its cars proving to be 100% reliable throughout the two one-hour races, the team had a more challenging week than anticipated, with this being its inaugural event – Sumo Power GT having only been formed in January. After its Nissan GT-Rs posted the fastest lap times in Wednesday’s Balance of Performance tests, things were looking good for the race, but with 30 kilos of ballast added by the FIA in an attempt to equalise the speeds of all 24 cars on the grid, the team was justified in its concern that this was a far too severe penalty. Its fears were endorsed when the cut-short qualifying sessions on Friday revealed that Michael Krumm and Peter Dumbreck in car number 23 would line up 9th and Jamie Campbell-Walter and Warren Hughes in car number 22 would line up 19th on the grid. Right from the word go, luck seemed to be against the Sumo Power GT team, Dumbreck finding his car handling strangely on the formation lap for race one. Then, as he turned into the first corner following the 4.00 pm rolling start, his suspicions that the left-rear tyre was deflating were confirmed.

As it transpired the first corner was packed with incident and, with debris strewn across the track, the safety car was deployed. This gave Dumbreck an opportunity to dive into the pits and get back to the race without loosing too much time, although he was now running in last place.

Once out of the pits, the remainder of the race saw the two Sumo Power GT Nissan GT-Rs locked in battle with the Swiss Racing Team’s similar cars. However, Hughes’ tyres were now degrading rapidly, with Krumm going past on lap 22 and then pulling away from the trio of Nissans that followed. Try as he might, Hughes attempted to defend his position, but lost another place on the next lap.

The one-hour duration allowed 26 laps to be completed and the Sumo Power GT team was pleased to see its cars cross the line in 11th and 13th places, the race won by Andreas Zuber and Marc Hennerici in a Phoenix Racing/Carsport Corvette.

With grid positions for race two dictated by the finishing positions in race one, the team’s two Nissans were to find themselves in the middle of the pack. The start took place at 7.45 and therefore under floodlights, but thankfully in slightly cooler conditions from that of the first race where temperatures reached as high as 40 degrees centigrade!

Once again, the first corner was to prove entertaining, with Krumm – who was now driving first – having to take evasive action and run wide. Then, a few corners later and having battled his way up to 6th, he was clipped from behind by another car and once again, car 23 made an unscheduled pit-stop after the first lap.

Following a quick inspection and a wheel change, Krumm was on his way again, but having lost around one-minute, 45 seconds and now in 19th place – and with bent rear suspension – the chances of a good result were over. Hughes on the other hand was pleased with the adjustments the team had made between races and, with his car handling better, was in 15th position. Both cars pitted for the mandatory driver change after 13 laps, with Campbell-Walter and Dumbreck in for the second stints this time around. Without missing a beat the two Sumo Power GT Nissan GT-Rs continued to circulate the 5.5 kilometre track, with both drivers finding they were able to post far more consistent lap times that they had in the first race – with far less wear on the tyres – and therefore able to make up places as other competitors retired from the chase.

After an hour and – on this occasion – 28 laps, the Sumo Power GT team was understandably satisfied to see its cars end the weekend without any damage or mechanical issues whatsoever, with car 22 claiming a respectable 12th and car 23 a hard-earned 16th place. The race was won by Thomas Mutsch and Romain Grosjean in a Matech Ford GT.

Michael Krumm – Driver car 23:
“It’s not the outcome we wanted, but having got up to 6th place and set one of the fastest laps of the week in testing, we know we can be competitive, so I’ m sure we will be in better shape for round two.”

Peter Dumbreck – Driver car 23:
Of course it’s disappointing not to finish in the points, but the second race was certainly an improvement on the first, with lap times far more consistent. It would have been interesting to see how we would have got on if we didn’t have to come into the pits at the end of the first lap in both races.”

Warren Hughes – Driver car 22:
“I know we didn’t get the results we were looking for this weekend, but I feel really positive after the second race. The car ran very well and I’m sure that we are now heading in the right direction with set-up. The car has an excellent engine, gearbox and brakes, so once we can get the balance right, I’m sure we’ll be up there with the front-runners.”

Jamie Campbell-Walter – Driver car 22:
“It was great to finish as the top Nissan out of the four that were competing, especially as Warren and I have probably had less time in the car than any of the other drivers. The few changes we made seemed to make all the difference and I am confident we will be even more competitive at Silverstone.”

Allen Orchard – Team Manager:
“It’s been a challenging week and we come away from this event having learned a great deal. Since we created the team in January, everyone has worked extremely hard, so I am delighted that we have had no mechanical issues with the cars. Naturally, I’m disappointed that we could not challenge for the leading positions, but once we were allocated the weight penalty, which meant we qualified in the ‘busy’ part of the grid, we were always going to be on the back-foot from then on. This weekend’s results have clearly proved that the pre-season Balance of Performance testing hasn’t worked and therefore, we now look forward to the next round at Silverstone and putting the records straight.”