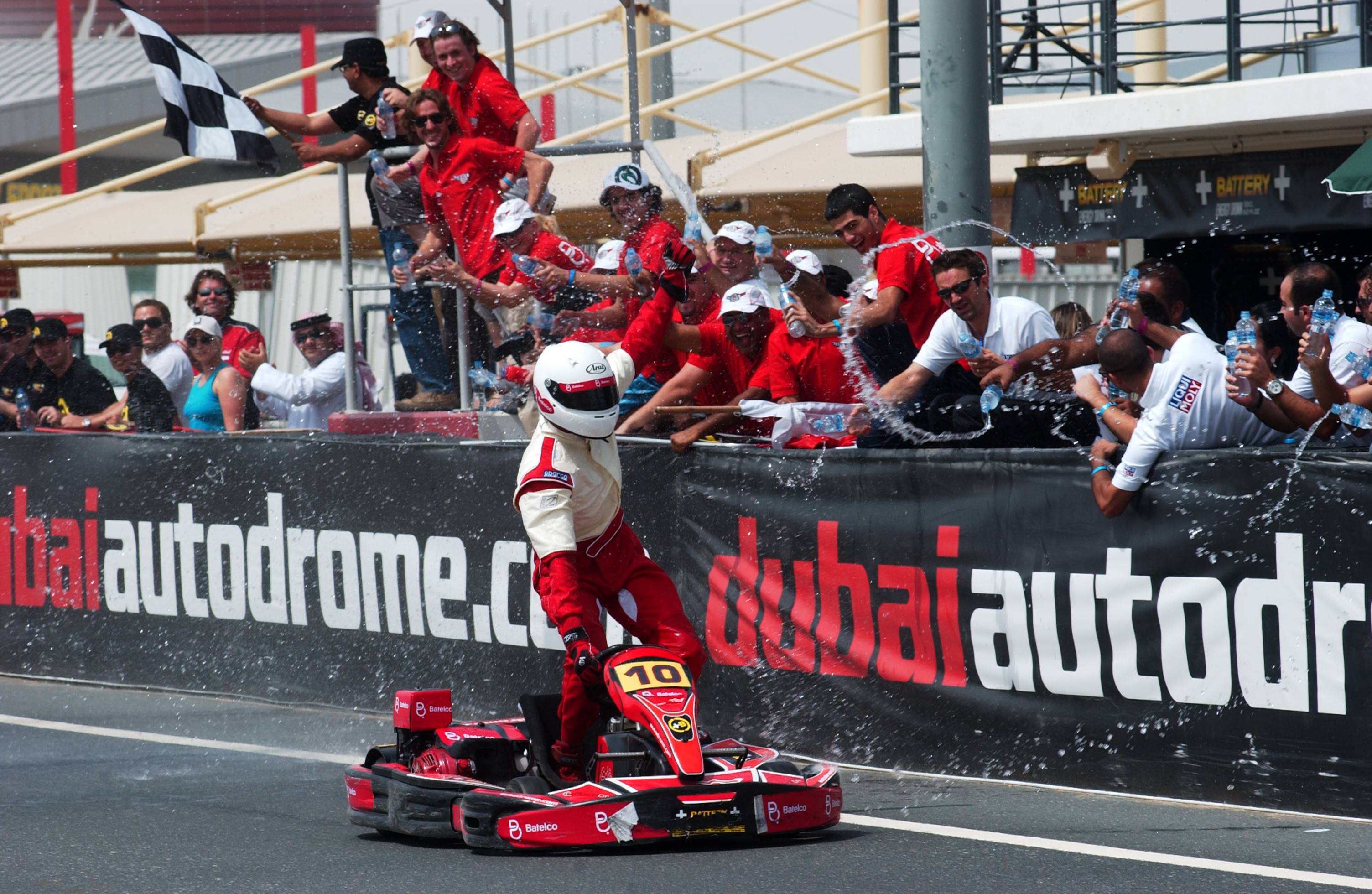 On a hot summer’s day in Dubai, Batelco team from Bahrain today (Saturday, 10 April) emerged triumph after a grueling Battery 24 Hours kart race at the Dubai Kartdrome. They triumphed over a potent field and challenging conditions which saw the race run under extreme heat and blustery winds throughout the event.

Batelco meant business from the outset by drafting in to their team, arguably one of the best endurance karters in the world, Christophe Hissette to spearhead their challenge for top honours. The Dubai based driver delivered as he and his team battled hard to assert themselves in the early stages. By the sixth hour they had lapped the entire field and thereafter stamped their authority on proceedings and by midnight they had established a strong lead where they remained until the chequered flag. In the end they won by a comfortable margin of 15 laps and with the victory notched up their second Dubai 24 hours race win.

Lead driver for the team Hissette said at the end, “This was a great victory for Batelco. We had excellent drivers and the team spirit carried us through when the pressure was on. I want to thank Batelco for sponsoring the effort and am proud of this team effort that resulted in this fantastic win. We are all very, very pleased with our performance.” The 24 Hours at the Dubai Kartdrome boasted a new sponsor, appropriately, in the form of Battery energy drinks whose products were greatly consumed as drivers and teams grappled in what many describe as the toughest 24 hours in memory. It was the 15th edition of the race which is now a mainstay of Dubai’s prestigious annual sporting calendar.

During the course of the race the Sheikh Hasher Al Maktoum led Santos Motors team, the Ocean Rubber team and Liqui Moly Speedsters chased Batelco for all they were worth, while battling among themselves for podium the remaining two positions. Santos Motors, who started from pole position, and Ocean Rubber enjoyed spells in the lead and at the end, when the chequered flag fell it was Ocean Rubber taking second with Santos Motors in third, a mere lap behind as their battle lasted until the very last hour.

In the “race within a race” corporate Battery Forum Racing overcame a bad start and carved their way through to the head of the corporate category, eventually finishing sixth overall which was a remarkable performance by the team who introduced Battery energy drinks company to the event.

Last word to Battery energy drinks boss, John Eapen, “It was an impulsive decision to get involved with the 24 Hours at the Dubai Kartdrome, and after this first event I can say the synergy and energy between the two was spot on. To the winners of this the first round, of the 2010 Battery Endurance Championship at the Dubai Kartdrome, all I can say is congratulations Batelco team for a fine performance. To all the others teams and drivers I say just competing and finishing in this event makes them all winners.”