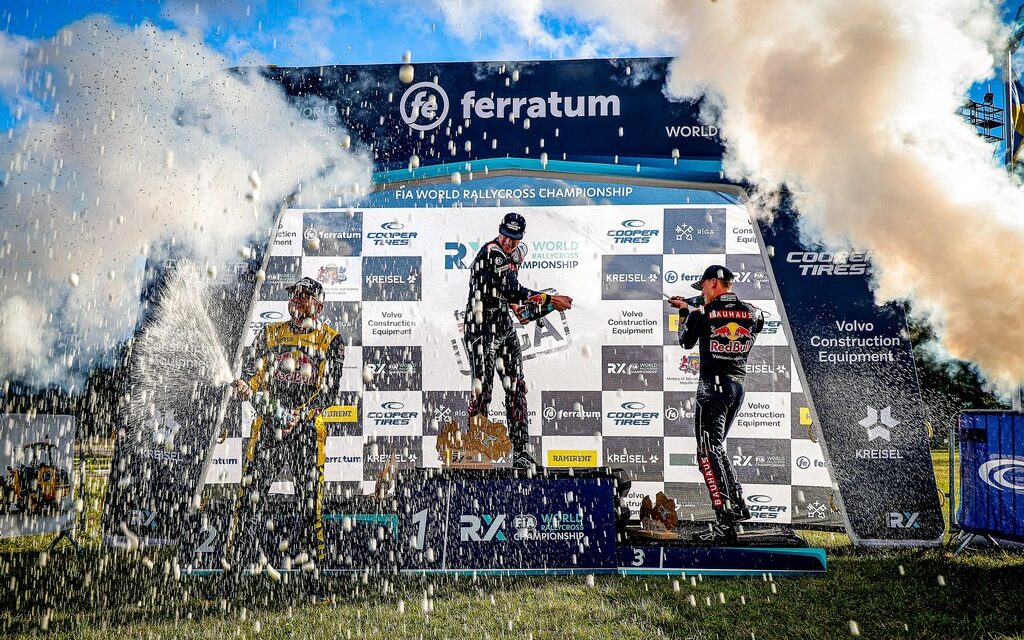 Johan Kristoffersson maintained his unbeaten start to the 2022 FIA World Rallycross Championship season on the second day of action at Ferratum World RX of Riga-Latvia today (4 September), conquering changeable conditions to emerge on top once again.

Fastest in the single-lap SuperPole session – like on Saturday, by less than a tenth-of-a-second from Timmy Hansen – Kristoffersson might have admitted to ‘tiptoeing’ his way through heat one after the heavens opened, but he was fastest nonetheless. He had to narrowly give best to his Peugeot rival in heat two, but the result still cemented his position at the summit of the intermediate ranking.

The defending world champion dominated his progression race before tactics came fully into play with regard to start position selection for the semi-finals and final on the drying track surface. In the semi-final, Kristoffersson plumped for the middle of the grid in third and it paid off handsomely – propelling him more than five seconds clear of the pursuing Hansen. For the final, he elected to start second – and he would be made to work somewhat harder.

Slight contact between the two career-long adversaries into the first corner allowed Kevin Hansen in the sister 208 RX1e to sweep around the outside from fifth into the lead. An opening lap joker from elder brother Timmy released Kristoffersson to take up the chase, and as the laps ticked down, the Volkswagen driver turned up the wick.

When Kevin Hansen dived into the joker at the end of the penultimate tour, the Kristoffersson Motorsport star had – like yesterday – just a single lap to make the difference. Also like yesterday, that was all he needed. As the chequered flag was readied, Kristoffersson exited the joker to seal his 30th World RX win by the margin of just under three tenths-of-a-second.

“What a weekend!” reflected the 33-year-old, following his sixth victory in the Latvian capital. “Double-headers are demanding anyway, but this weekend was even more so with the weather being so up-and-down. We had to adapt to driving the car in the wet for the first time and make constant set-up changes to suit the conditions, which was a huge challenge for the whole team.

“It’s all about small details here in Riga – and that proved to be the case again. It was a tough fight with Kevin in the final, but I managed to reel him in and just had enough time to get the overlap we needed, and it was nice to see Ole Christian [Veiby] on the podium as well. Big thanks to the whole crew for doing a great job and for giving us a car that was on-point every time we went out – they worked incredibly hard for this result, and I’m so happy for them all.”

For Kevin Hansen, the runner-up spoils – replicating his Saturday result – marked the culmination of a tremendous recovery, given the Swede had languished at the bottom of the ranking due to a collision with Veiby at the start of the second heat. The 24-year-old won his progression race following a clash between Timmy Hansen and Niclas Grönholm, and led his semi-final until he was pushed into a half-spin by Veiby on the last lap, for which the Norwegian incurred a ten-second penalty.

The younger Hansen’s weekend haul has elevated him to second in the championship – tied on points with his team-mate, who ultimately finished fourth after looking for much of the day like he would be the one to truly take the fight to Kristoffersson. The 2019 world champion flashed cross the finish line less than half-a-second behind Veiby, who showed a strong turn-of-speed around the Bikernieki circuit to tally a second podium from three starts in his comeback campaign.

Grönholm wound up fifth at the end of a difficult weekend for the Construction Equipment Dealer Team – just over two-and-a-half seconds shy of victory. Stablemate Klara Andersson, KMS young gun Gustav Bergström – who continued to impress with his lightning-fast launches – and René Münnich all exited proceedings at the semi-final stage.