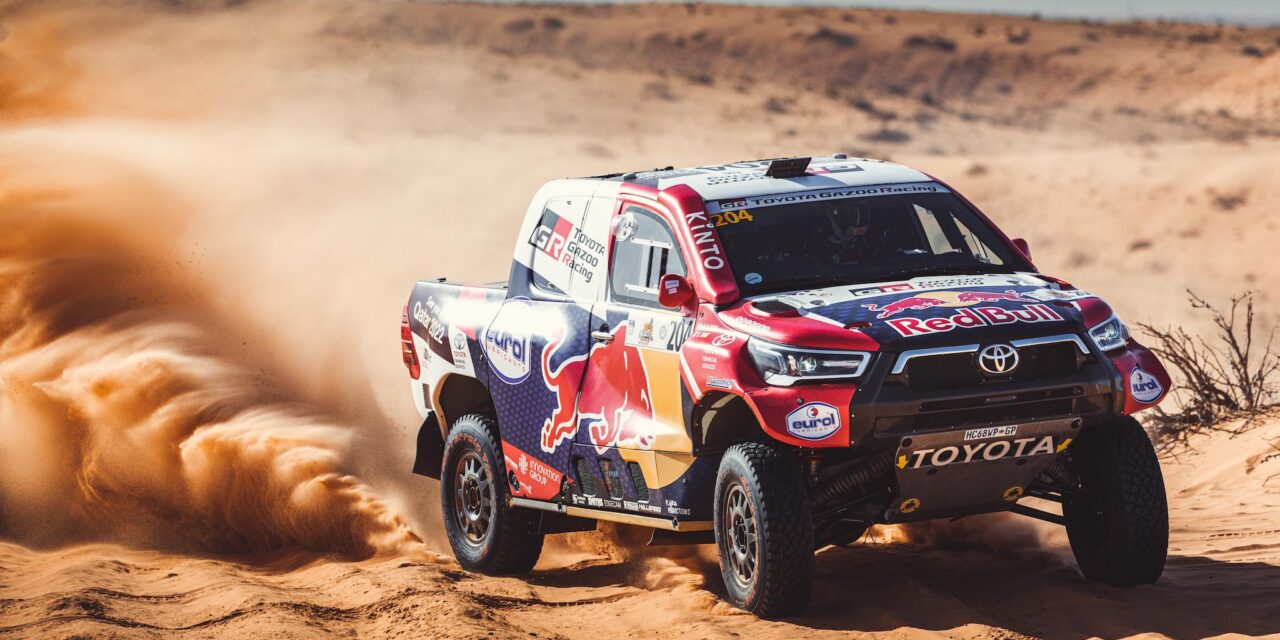 HAIL (SAUDI ARABIA): The first of two back-to-back Baja events running under the ‘Hail Rally Toyota 2020’ banner got underway at Al-Maghwat on the outskirts of Hail city from 16.00hrs on Thursday evening. The three-day event marks the fourth round of the 2020 FIA World Cup for Cross-Country Bajas and finishes on Saturday afternoon.

Baja Hail 1 will ran over two selective sections, starting with the 251.81km Radifah section on Friday (December 11). The first FIA entrant will begin the stage close to the historic hub of Jubbah, 90km from Hail, at 08.58hrs. The town lies on the old caravan road between Najd and the eastern Mediterranean.

The Baja route winds its way through the An Nafud desert to the north-west of Hail city and finishes close to Highway 65, the Kingdom’s main link road between Riyadh and the Jordanian border to the north. There will be a passage control after 165.77km.

The second section of Baja 2, 275.29km starts close to Jubbah at 09.00hrs on Saturday morning and heads further west of Hail before looping through the desert to finish close to the village of Q’na. Rally officials have arranged two passage controls after 147.29km and 261.46km.

Nasser Saleh Al-Attiyah held his nerve to set a second successive fastest time and seal victory in Hail Baja 1, round four of the FIA World Cup for Cross-Country Bajas, on Saturday.

Despite opening the road on the 275.54lkm stage and having the extra burden of navigation, the Toyota Hilux driver and his French navigator Matthieu Baumel stayed ahead of closest rivals Carlos Sainz and Stéphane Peterhansel to win the stage by 3min 20sec and seal a winning margin of 6min 10sec.

Al-Attiyah said: “It was a good day for us. We believed in our speed. We opened the road but we only had one way and that was to push. We make incredible stage without mistake, no problems and no punctures. I am happy to win Baja 1. Now we have two days of rest. Baja 2 will be different but we try to do our best. Third win in Hail and hopefully the fourth one is coming very soon..”

Sainz and Peterhansel were closely matched throughout the challenging stage in the two new Mini John Cooper Works Buggies and reached the finish in second and third overall.

Double Dakar and WRC series winner Sainz said: “All is okay, no problem. We keep planning and we will try a couple more things a day after tomorrow.”

“Today was an interesting stage, a mix of fast tracks, sandy tracks and dunes with a very beautiful landscape,” said third-placed Peterhansel. “This two days of racing was interesting with a good level of organisation, good road book and this is a great opportunity just before the Dakar to do it.”

Five-time Hail Rally winner Yazeed Al-Rajhi had to settle for fourth place on the first of the Bajas, the Saudi driver finishing 14min 48sec behind his winning Toyota team-mate.

“I enjoyed this rally as preparation for Dakar and everything went well,” said Al-Rajhi. “First day we had a small issue and we didn’t take too much risk today. I think the next race, we need to improve a little bit in the soft and slow dunes because you do not need to push more. When you push more, you lose time.”

The second stage began close to Jubbah and headed west of Hail before looping through the desert to finish close to the village of Q’na. There were two passage controls after 147.29km and 261.46km.

The leading quartet were closely matched through the opening checkpoints with Al-Attiyah holding a slight advantage over Sainz, despite opening the road and relying heavily on Matthieu Baumel’s precise navigation.  He gradually extended that advantage as the stage progressed to seal the win.

Russian Vladimir Vasilyev moved ahead of Dutchman Bernhard Ten Brinke in the battle for the FIA Baja Drivers’ titie. The duo finished Hail Baja 1 in fifth and sixth positions and the outcome of the title race will now be decided at the final round on December 14-16.

Saleh Al-Saif may have slipped behind Russia’s Denis Krotov (Mini) and into eighth in the overall standings, but the Saudi driver had the superb consolation of a useful victory in the FIA T3 category in his Can-Am.

Dutchman Kees Koolen finished in 13th place and first in the FIA T4 section in his South Racing Can-Am Maverick X3. He was second best on the day’s stage to a resurgent Aron Domzala, but the Pole’s first day woes had given Koolen a massive cushion and he duly closed the gap on his rival for the FIA T4 title.

Khalifa Al-Attiyah, the brother of overall event winner Nasser, was third in the category but technical issues thwarted Lorenço Rosa.

Czech driver Martop Prokop had been unable to start Hail Baja 1, but the former WRC star was permitted to take part in the second leg of the National Rally for testing purposes.

Yamaha’s Adrien van Beveren delivered another polished performance on his pre-Dakar test to crush his amateur rivals in the motorcycle category. The Frenchman won the stage by 23min 16sec from Konrad Dabrowski to record a winning margin over the Pole of 48min 25sec.  Saudi rider Mishal Al-Ghuneim finished a distant third.