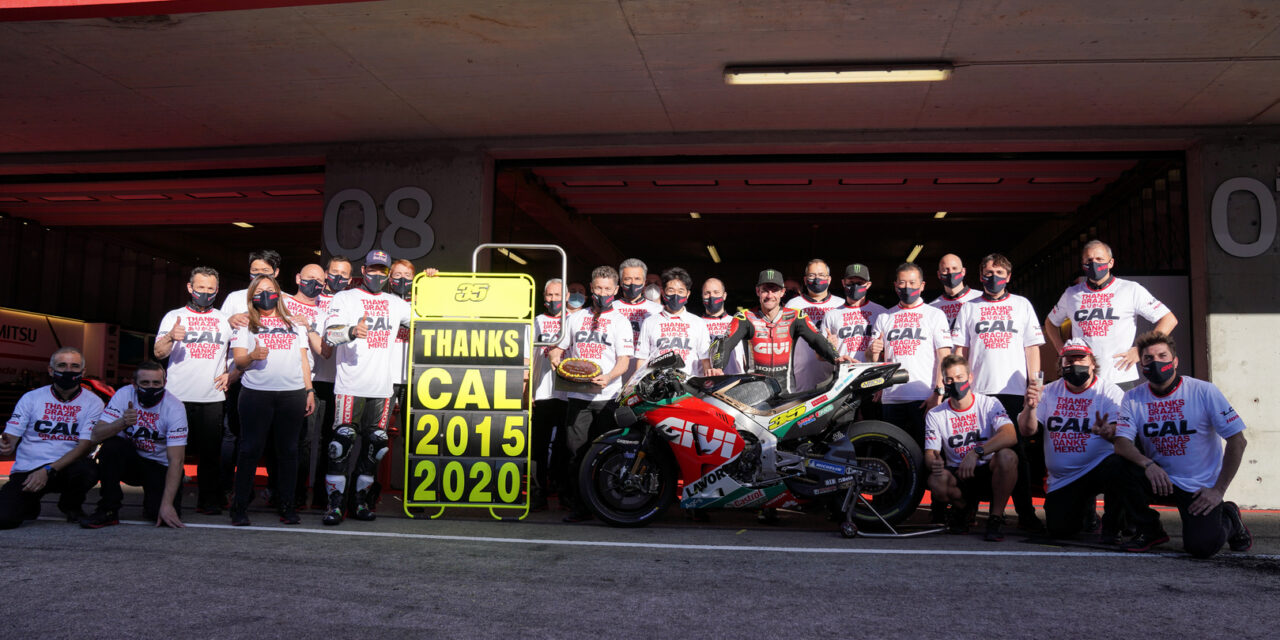 Sunday has been an emotional day for the LCR Honda squad as it was Cal Crutchlow’s last race with the team. At the beginning of this unique season, it was announced that Cal would not continue with Lucio Cecchinello’s team for the 2021 campaign. So, after six memorable years together, the LCR Honda outfit would like to express their immense gratitude to Cal for his effort and hard work.

Together they were able to obtain the team’s first victory in the MotoGP class. Cal achieved a total of 12 podiums and 3 victories over the last six seasons, becoming the most important rider in LCR history. Cal “First of all, I want to say thank you to my team for the last six years, we’ve had some incredible moments. This year obviously didn’t go to plan, but with the team that I’ve spent the most amount of time with in my career, it was nice to finish it with them. I gave my all this weekend, I topped a couple of the sessions, I went for it in the race, unfortunately I didn’t have the rear tyre under me to be able to continue to push at that pace, but I was glad to finish the race and glad to have the season over and my full-time career finished, which was the decision I took earlier in the year and am happy with. Now I look forward to watching from afar, obviously I’ll still be in a testing role next year, but I look forward to watching the MotoGP races in years to come. It’s going to be exciting, I’ll let these young guys take the reins and go for it and I wish them all the best.”

Crutchlow joined the LCR Honda CASTROL team in 2015 and got on the podium that same year in Argentina. Perhaps his crowning glory came in 2016 as he took the team’s first victory in Brno – and became the first British Grand Prix winner in 35 years. A second win at Phillip Island followed this achievement in his second year with the team, which helped him secure Top Independent Team rider in 2016.

The Briton finished on the podium once more in Argentina in 2017. In 2018, Cal secured his third victory, in Argentina, and followed it with two more podiums in Misano and Motegi. Then, in 2019, Cal added three more podium finishes in Qatar, Germany and Australia.

The 2020 FIM MotoGP World Championship marks Cal Crutchlow’s last year competing in the premier class and he did it as an LCR Honda CASTROL team rider aboard a factory-spec Honda RC213V.
Lucio Cecchinello

“It is a hard day for us because Cal Crutchlow has definitely been the most important rider in the history of the LCR Honda team. He has been the rider that has ridden for the longest consecutive period of time with us and, because of this, he is part of our family.

Cal brought 3 stunning victories and 12 podiums in total to LCR. We were also able to support Honda by adding crucial points for the Constructor World Championship Title and with him, we won Best Independent Team in 2016. What Cal has done for the LCR Honda Team is simply extraordinary.

During these six seasons together, we’ve had also some tough moments, difficulties, injuries… but this is all part of this incredible sport that gives us a lot of emotions, happiness and adrenaline. On the other hand, of course, it also gives us many headaches, fears and stress. If everything were smooth and perfect, we wouldn’t enjoy our job as much. I think that it is because of these emotions and mixed feelings, that we love MotoGP.

Cal Crutchlow will always be part of our family. We wish him all the best in his professional future and in his private life with Lucy and Willow.”