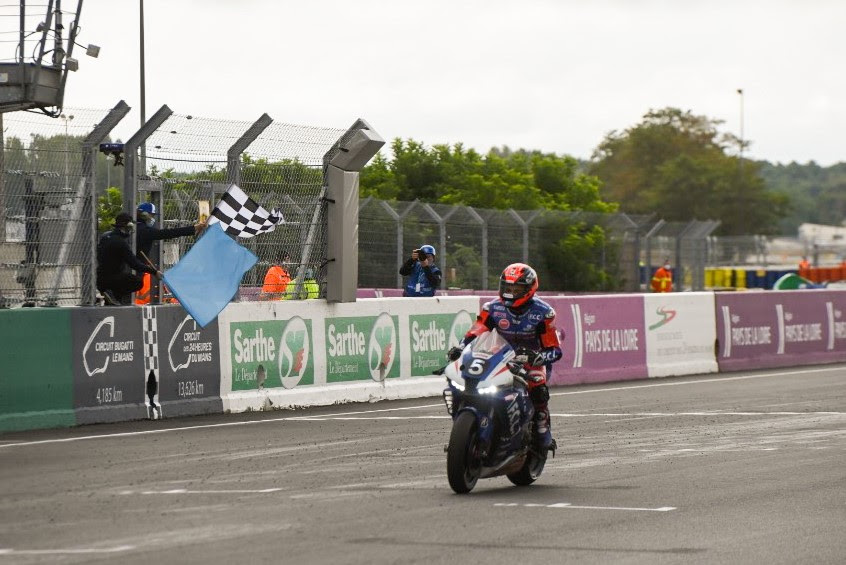 The official starter for this year’s race was Dominique Méliand, who has attended every 24 Hours Motos since 1978, the year that the event was created. Before the start, he predicted: “It’ll be an action-packed race because the weather will be a factor. Riding through the rain for 23 hours isn’t difficult but riding under changing conditions is much trickier.”

The founder and former manager of the Suzuki Endurance Racing Team (SERT), who saw his team triumph ten times at the 24 Hours Motos, proved to be right: the first part of the race was marked by a series of falls as the afternoon’s rain showers made the track slippery and even the top teams and experienced riders were caught out. Some bikes were also affected by technical issues.

Six manufacturers were represented on track?–?Kawasaki, Honda, Yamaha, Suzuki and the much-awaited Ducati, which soon learned how demanding a 24-hour race is. After a refuelling problem, exhaust issues and then the engine cutting out, the #6 ERC-Endurance bike finally retired, bringing the DNF total to seven this year. 31 bikes thus made the final rankings.
The #5 Honda racing for F.C.C. TSR Honda France enjoyed an almost perfect race, regularly setting lap records and leading for 600 out of a total 816 laps. After its first win in 2018, the Japanese outfit has thus added a second 24 Hours Motos trophy to its haul. It also takes away the Le Mans-Suzuka trophy, which symbolises the friendship agreement between Le Mans and Suzuka.

In Superstock, the class win goes to the #56 GERT56 BY GS YUASA and riders Stefan Kerschbaumer, Pepjin Finsterbusch and Lucy Glöckner, who becomes the first woman to win the class at the 24 Hours Motos.

Pierre Fillon, President of the Automobile Club de l’Ouest: “It’s a huge pleasure to congratulate the winners of the 2020 24 Hours Motos. Winning this iconic endurance race is a formidable challenge, especially under tough weather conditions. Bravo to F.C.C. TSR Honda France and riders Josh Hook, Freddy Foray and Mike di Meglio. Organising this year’s event, in these unprecedented times, ensuring safety for all while complying with the mandatory health regulations, was a demanding but necessary task. I must therefore extend my congratulations to all the competitors, the members of our organisation and to all our volunteers, who helped make the 2020 24 Hours Motos a success. It was an important stage ahead of the 24 Hours of Le Mans car race, which will also be run behind closed doors on 19–20 September. Unfortunately, our fans could only watch from afar, but I have a message for them: see you here at the next 24 Hours Motos on 17–18 April 2021!”

With the 24 Hours Motos now over, the next event is the 12 Hours of Estoril, which will bring the FIM EWC Endurance World Championship season to a close on 27 September.