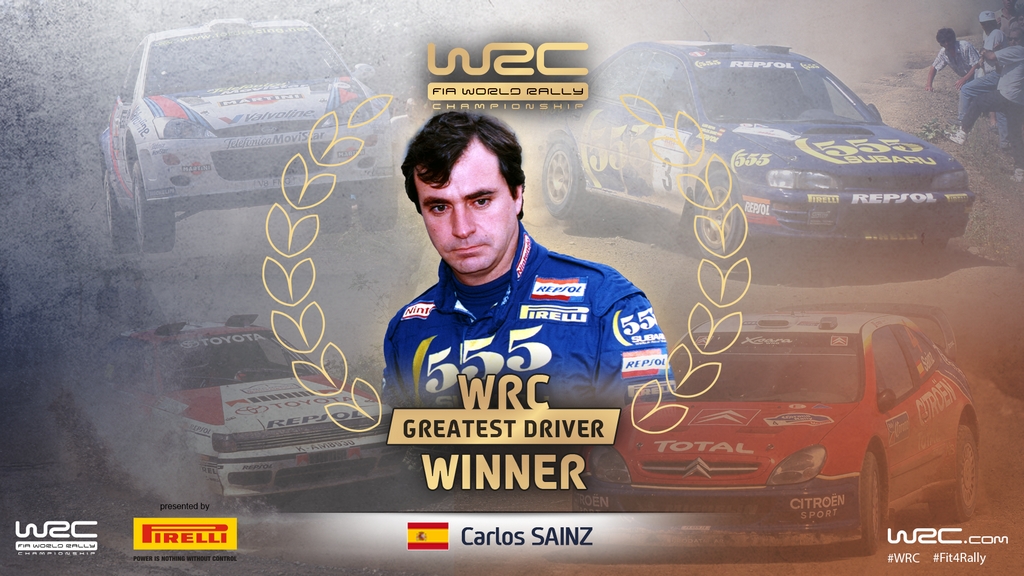 Munich, 5 May 2020 – Carlos Sainz has been crowned The Greatest WRC Driver of all time in a poll of fans and expert journalists on the FIA World Rally Championship’s official website.

The double world champion, from Spain, defeated Sébastien Loeb in the head-to-head final. Sainz claimed 57.28 per cent of the vote in a close climax to the contest.

The competition on wrc.com captured the imagination of rally fans across the globe with more than 80,000 votes cast in the final. More than 300,000 votes were polled during the month-long tournament, organised by WRC Promoter and supported by Pirelli.

“I cannot be more happy and more proud about this recognition,” 58-year-old Sainz told fans. “Thank you very much for bringing me first to the final and, of course, secondly for allowing to me to win this recognition against Sébastien Loeb.

“I don’t need to tell you how much I rate Sébastien Loeb and how much he deserves to be the greatest. But I have to say not only him, all the world champions merit this recognition. But somebody has to win and, in this case, it has been myself.

Sainz, nicknamed El Matador, won the drivers’ world title in 1990 and 1992 with Toyota and scored 26 WRC wins from 196 career starts. He was one of the WRC’s most consistent performers and also finished second or third in the championship on a remarkable nine occasions.

He stood on the podium in almost half the rallies he started and was renowned for his attention to detail and pre-event preparation.

All 18 champions since the introduction of the WRC drivers’ title in 1979 were joined in the competition by two wildcard entries.

A tournament-style knockout draw brought drivers into head-to-head battles against each other. Every day, fans and a panel of expert journalists voted for their favourite from each pairing.

Sixth seed Sainz defeated Hannu Mikkola in the opening round of the competition before toppling third-ranked Tommi Mäkinen. He then beat six-time champion Sébastien Ogier, seeded second, in the semi-final.

The panel of six expert journalists could not split the two drivers in the final as each gained three votes. It meant the ultimate decision rested with the fans and Sainz’s incredible popularity carried him to victory.

WRC Promoter managing director Oliver Ciesla was bowled over by the huge response to the competition.

“Firstly, my congratulations to Carlos for adding the title of The Greatest WRC Driver to his numerous achievements,” he said.

“He was already a WRC legend thanks to his incredible driving skills in the most brutally tough and unforgiving terrain on the planet. This accolade confirms the esteem in which he is held by both fans and pundits. He is known as King Carlos – now he is officially the King of the WRC!

“Sébastien is statistically the most successful driver in WRC history. But we wanted fans to think beyond the numbers in choosing their greatest.

“The popularity of this competition far exceeded our hopes. We wanted it to provide some fun for our fans when there is no WRC action, but its popularity grew and grew across the media. To receive more than 300,000 votes is remarkable – a big thanks to everyone who took part,” added Ciesla