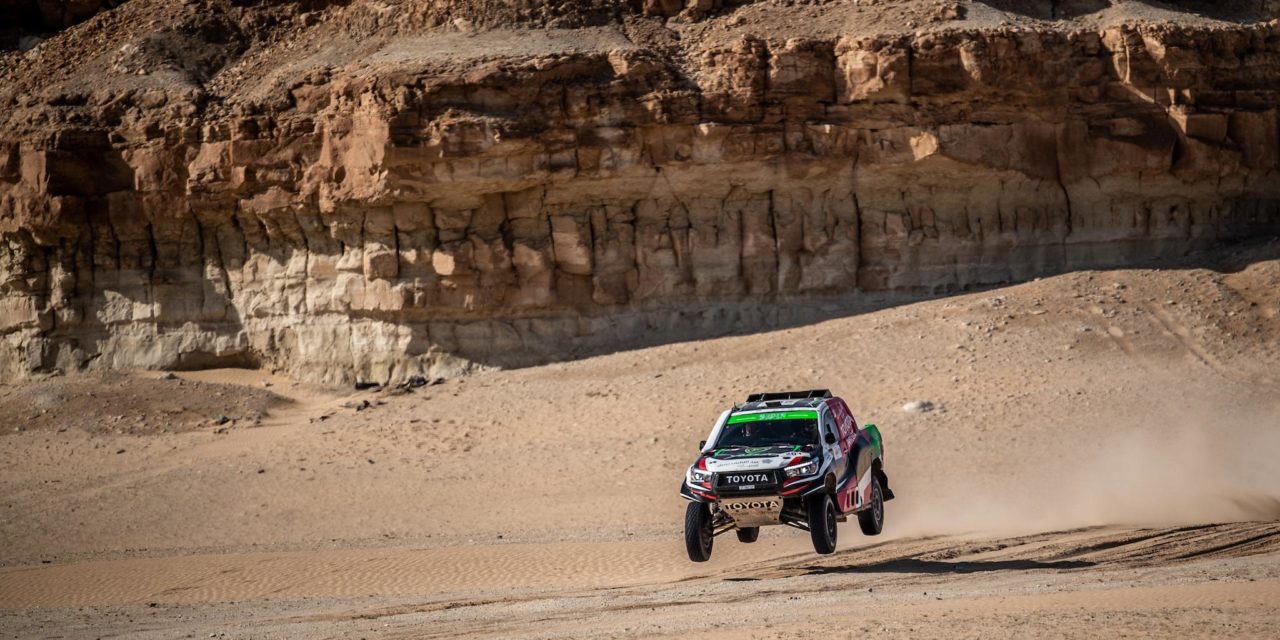 HALF MOON BAY (Saudi Arabia): Saudi Arabia’s Yazeed Al-Rajhi overcame a change in the overnight timings that had seen him fall three seconds behind Spanish rival Carlos Sainz to card the quickest time on the third stage of the Sharqiya Baja and seal an emphatic victory on Saturday.

Al-Rajhi and co-driver Michael Orr guided their Toyota Hilux to a time of 1hr 08min 56sec on the stage of 171.25km and that was enough to seal a winning margin of 1min 17sec and confirm the Saudi Toyota Desert Championship title in superb style.

“It is a nice feeling to win the new Baja and the new Saudi Toyota Desert Championship,” said Al-Rajhi. “It has been an enjoyable few weeks competing here and it has given us a chance to prepare well for the Dakar Rally, which is coming up very quickly.”

Sainz and fellow Spaniard Lucas Cruz used the last round of the new Saudi series as a useful shakedown for the Dakar Rally in January and pushed the winners all the way across the deserts of the Eastern Province in their X–raid MINI JCW Buggy. They finished 8min 54sec in front of third-placed Sheikh Khalid Al-Qassimi, the Peugeot 2008 driver overhauling ED Racing’s Essa Al-Dossari to snatch the final podium spot on the last day.

Sainz said: “I am generally happy with the shakedown and the test. I think it was good to have a test of the country, have a taste of the temperature and learn a little bit about what we are going to find in a couple of weeks. Regarding today, after what happened yesterday (Yasir’s crash), I took it very easily because this is our race car and it was not the moment to take any risks. I am happy we learned things with the car, even if the conditions were not the best, especially with the rain yesterday. No problems. Everything was positive.”

Sainz had been handed the outright lead on Friday evening by Baja officials after a three-minute timing discrepancy for Al-Rajhi was corrected and he slipped to second overall. Numerous other competitors saw their times for the stage changed and Mishal Alghuneim found himself leading the motorcycle category.

Following Yasir Seaidan’s retirement after his high-speed roll on Friday, Czech driver Miroslav Zapletal was left to finish the event in an unchallenged fifth with his Ford F-150 Evo.

Zapletal finished over 42 minutes in front of sixth-placed Farhan Al-Muharib, who clinched a 2min 57sec win over Khalid Al-Hamzani in a Nissan-dominated T2 section for series production cross-country vehicles. Hamzani also reached the finish in seventh overall, while Yousef Al-Suwaidi was eighth and third in T2.

Omar Allahim was classified in ninth in his Nissan Patrol. Saleh Al-Saif lost over 10 minutes in the final stage, but still managed to round off the top 10 and seal the win in the T3 category with a Can-Am after nearest rival Conrad Rautenbach of Zimbabwe ceded over an hour in the day’s stage and slipped to 20th overall in his PH Sport Can-Am Zephyr.

Yousef Al-Dhaif had already sealed the Saudi NUTV Championship before the final round and the Can-Am driver wrapped up a successful campaign with another category win. Second place for Majed Al-Tuwaijri ensured that he finished as series runner-up at the expense of Fahad Al-Naim.

Mishal Alghuneim maintained the advantage in the motorcycle category that he had been awarded when a timing error was corrected and the KTM rider held on to seal a winning margin of 6min 14sec over Haysham Al-Haysham. Anas Al-Ruhyni finished third, but Emirati rider Othman Al-Ghufeli retired on the stage.

Abdulmajeed Al-Khulaifi confirmed victory in the Saudi Quad Championship with a third victory of the season to follow his successes at the Qassim and Al Ula-Neom rallies. The Yamaha rider finished an unofficial fourth on the stage, but did enough to see off the challenge of runner-up and main series rival Riyadh Al-Oraifan. Sufiyan Al-Omar came in third after incurring a five-minute time penalty.

The event was organised by the Saudi Automobile and Motorcycle Federation (SAMF), under the chairmanship of H.R.H. Prince Khalid bin Sultan Al-Abdullah Al-Faisal and the supervision of former FIA Middle East champion Abdullah Bakhashab.

The new Baja ran support of the Saudi Automobile and Motorcycle Federation, the General Sport Authority, Abdul Latif Jameel Motors (Toyota), the MBC Group, Al-Arabia outdoors and the Saudi Research and Marketing Group. It was observed as an official candidate for future inclusion in the FIA World Cup for Cross-Country Bajas.