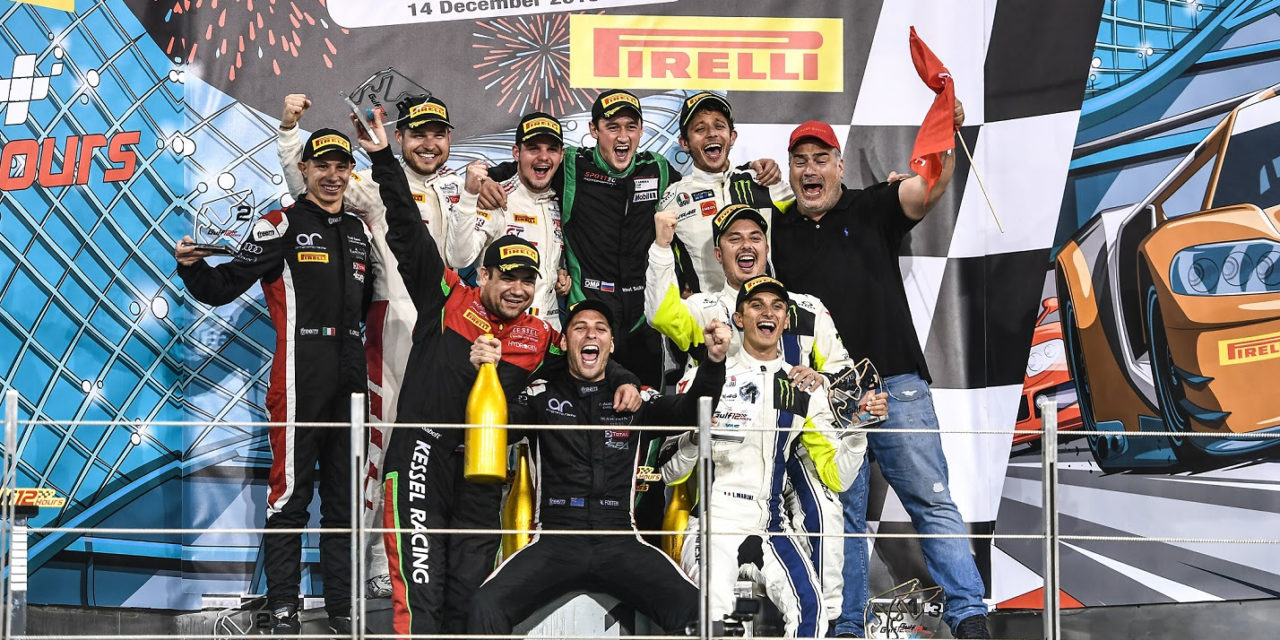 Audi scored its first win in the nine-year history of the Gulf 12 Hours with a convincing one-two finish for the Attempto Racing team and was joined on the podium by Valentino Rossi and the #46 Monster VR46 Kessel Racing car at Yas Marina Circuit in Abu Dhabi.

Having begun the second part of the race with a front row lockout, the #66 Attempto Audi R8 GT3 fell on to a large slice of luck. When it was handed am early Stop/Go penalty for a pit stop infringement in the first part of the race, it was served as a safety car was called when the #83 Iron Lynx all-female Ferrari 488 GT3 Pro driven by Michelle Gatting, collided with the #15 Optimum Motorsport Aston Martin Vantage GT4 when attempting to lap driver David Holloway. The Ferrari suffered toe link failure to the rear left wheel, causing immediate retirement.

The #66 Audi returned to the track in second place, only 12 seconds behind its sister car. From thereon, the Audi pair switched positions before the #66 car pulled ahead, and even a five-second time penalty for gaining an advantage over the #12 Art Line Team Georgia Lamborghini Super Trofeo GT Cup 1 class car, would not prevent it from taking a comfortable victory.

Behind the two Audi machines, the battle for third place heated up in the final hour. With the #7 Dinamic Motorsport Porsche 911 GT3 R car out with broken steering, and the #19 GPX Racing Porsche losing its opportunity with electrical problems in the final two hours, it left the door open for the #46 Monster VR46 Kessel and the #5 Uwe Alzen Automotive Audi R8 GT3 Evo.

With Rossi taking the wheel of the car’s final stint from team-mate Luca Marini, it was handed a five-second penalty for gaining an earlier advantage. But Alzen in the #5 car was unable to beat Rossi’s lap times and reduce the Italian’s 30-second advantage. Combined with a late drive-through penalty for Alzen for a pit stop served too late, it handed Rossi his first endurance car racing podium alongside team-mates Luca Marini and Alessio Salucci in a race of 316 total laps, a new record for the Gulf 12 Hours.

With the #46 scoring the class victory, and #5 Uwe Alzen Automotive Audi comfortable in second, the #8 LP Racing Lamborghini Huracán GT3 Evo was a lonely third in P13.

The #10 SPS Automotive GT3 Am car, in fifth place overall, took a convincing three-lap win over the #65 Kessel Racing Ferrari 488 with the #11 AF Corse Ferrari 488 a further three laps behind.

The battle between the #12 Art Line Team Georgia Lamborghini Super Trofeo and the #88 Dragon Racing Lamborghini, was settled in favour of the Georgian entry by a single lap after the #88 was handed a penalty for a pit stop infringement in Part One of the race. The #81 GDL Racing Lamborghini was a distant third.

The #14 MRS GT Racing Porsche Cup car strolled to victory by 37 laps ahead of the #87 GDL Racing 991 GT Cup machine which suffered with two spins in the opening half of the race, followed by severe suspension and radiator damage in the second half.

The GT4 class was an entertaining battle to the chequered flag as Balfe Motorsport scored a one-two in its pair of McLaren 570S machines, with only 23 seconds separating the two. The #90 SVC Sport Management Mercedes AMG GT4 car, which was in the running for the class win, suffered with two penalties for pit stop infringements at the end of both parts of the race to drop it to third.

The #4 ARC Bratislava Ginetta P3 maintained its lead of the Prototype class throughout the second half of the race following repairs to the #2 United Autosports Ligier JSP3 in the opening half of the race which resulted in it finishing the race a lap down on its rival.

“I’m really happy to tick off the box of Audi winning at the Gulf 12 Hours. It’s the first time that I race with Attempto and to win at the first opportunity and score a one-two is really cool. The car was really amazing to drive. We saw that in qualifying where it was really close. The first hour of the race was really tight, I enjoyed the fight with the [#77 Barwell] Lamborghini, the sister [#55 Attempto] Audi, [#19 GPX Racing] Porsche and (#48 HTP Motorsport] Mercedes. We just didn’t make any mistakes. We got the one time penalty but we were really lucky with the timing of the safety car. It was a call from the team owner to pit as he saw the Ferrari stranded there and knew the chance of a safety car was high. Everything went our way today. We kept our heads cool.”

“I think it was a good performance from the team and Audi Sport. We had a really good shot at it last year but a technical failure ended our hopes. So we had to come back and go for it again this year with a slightly different line-up but the same objective. From a performance side, we had a Bronze driver in each car this year, so there’s driver coaching involved too. Both did an extremely good and faultless job. It was difficult when there are many cars on track and in the hot conditions, the car is tough to drive. I’m proud to be a part of an Attempto one-two.

“As the track conditions cooled, the balance of the car came to us and the overall performance was demonstrated by being able to streak up the road in the closing hours.” 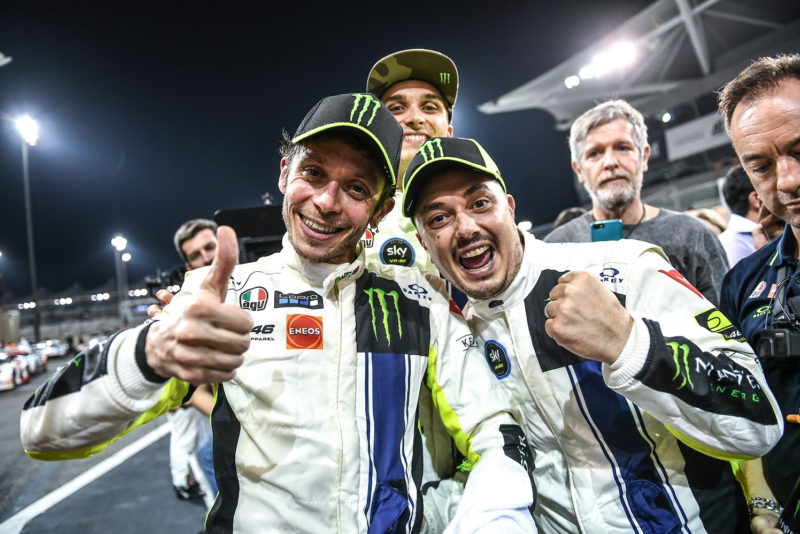 “It’s a great experience, I enjoyed it very much. The race is fantastic, track is great and I felt very good with the car from the beginning. It’s a new experience for us and a great feeling to race with Salucci and my brother [Luca Marini]. To especially finish on the overall podium, it is the first time and so I want to do it another time. It’s a long day but very fun. It’s difficult to keep the concentration but especially during the day because in the evening it’s colder, you enjoy it more. It’s long but beautiful. The tyres gave better grid in the evening and I was definitely stronger. It was Luca’s debut, and I know what he can do from rally driving, and we enjoyed it very much.”