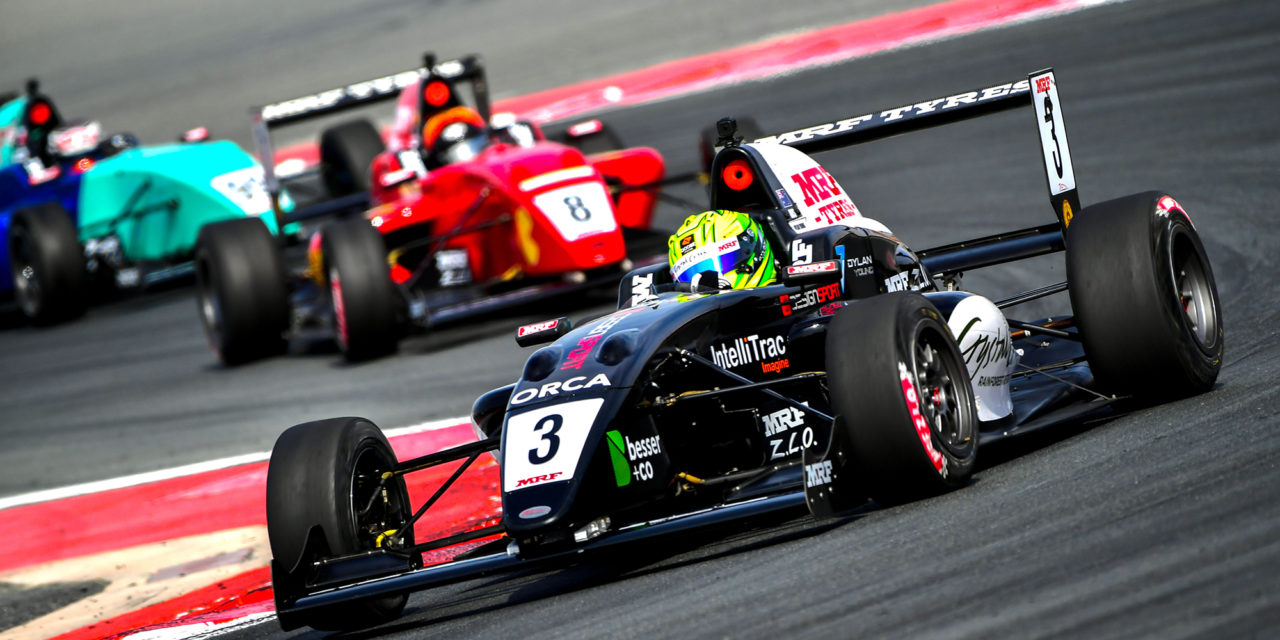 Dubai, UAE, 20 November 2019: The MRF Challenge, India’s only FIA-approved international championship and one of Asia’s premier single-seater competitions, conveniently slotted in the winter months, and now in its eighth season, will kick-start the championship at the Dubai Autodrome on Thursday, November 21.
The MRF Challenge 2018-19, organized by the Madras Motor Sports Club, will comprise 15 races spread over three rounds to be run in Dubai (Nov 21-23), Bahrain International Circuit, Bahrain (Dec 12-14) and the MMRT, Chennai (Feb 14-16, 2020).
Over the years, the MRF Challenge has featured quite a few high-profile racers like Mick Schumacher, the son of seven-time Formula 1 champion Michael Schumacher; Harrison Newey, son of Formula 1 design guru Adrian Newey; Manuel Maldonado, cousin of former Formula 1 driver Pastor Maldonado; female Formula 1 test driver with Alfa Romeo Racing Tatiana Calderon; last season’s champion Jamie Chadwick, who is also the first-ever champion of the W Series and the first-ever female driver to win an international race at Bahrain International Circuit.
The Formula 2000 car, prepared by Coimbatore-based Jayem Automotives, is powered by 2-litre Mountune Duratec engine producing 230 BHP while almost matching Formula 3 in speed and power. The car boasts of a Hewland six-speed sequential gearbox equipped with Integrated dash and paddle-shift system.
Mr. Arun Mammen, Vice-Chairman and Managing Director, MRF Tyres said: “It has been an exciting journey for us as we present the eighth edition of the MRF Challenge. We provide identical cars to all the drivers and so, the key differentiating factor is the driving ability. It has also been our constant endeavour to develop the car which is now among the fastest single-seaters in Asia. The MRF Challenge also offers us rich data that in turn helps us to develop further the slicks and wet tyres that are specially manufactured for this championship.
“We have positioned the MRF Challenge in the winter months between November and February to enable drivers to keep themselves race-fit during the off-season. We thus look forward to another season of exciting races.”
Chennai-based Chetan Korada, who turned 33 on November 14, is the lone Indian on the grid that includes teenagers from Europe and Australian veteran Dylan Young who has been a regular fixture in MRF Challenge.
Looking ahead to the season, Korada said: “This will be my second international season, also with MRF Challenge. My approach this year would be completely different. Last year was all about learning the car. I didn’t take part in the National championship this year, but did four days of testing in Malaysia in the summer. I have been studying the data, as to where I can improve. I am continuing with MRF Challenge as they have been very supportive.
“Also, a lucky charm has come into my life now with the birth of my daughter two months ago. So, overall, I am feeling good and hope to put in much better performances this season.”
The final list of drivers confirmed for the championship will be announced on completion of documentation process.

ABOUT MRF TYRES
Motorsports in India is synonymous with MRF. In fact, the development and popularity of various forms of the sport could be directly attributed to the pioneering efforts of the company, be it racing, rallying, motocross or karting. To encourage motorsport enthusiasts MRF has spared no resources in offering World-class facilities.
The development of MRF Power House – a modern motorsports facility has been a boon to the Indian drivers, who wished to compete and test themselves against international standards. The centre is a testament to the commitment of MRF to raising the bar of Indian motorsports.Being the largest promoters of motorsports in India, MRF has the added advantage of being able to use the racetrack to test the tyres.