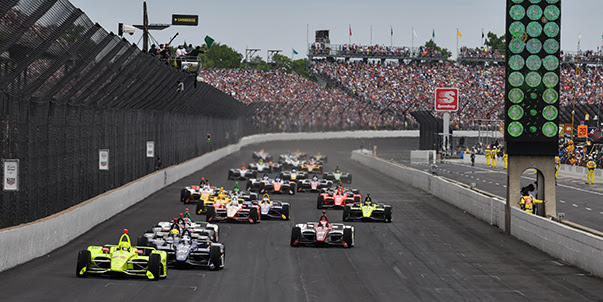 INDIANAPOLIS (Thursday, August 1, 2019) – INDYCAR, in partnership with Chevrolet and Honda, will implement a single-source hybrid system in its race cars for the 2022 NTT IndyCar Series season that will provide key enhancements ranging from competition to safety.

In keeping with INDYCAR’s history of integrating innovation into the sport, the hybridpowertrain will mark the first time that the vehicles will depart from the traditional, manual hand-held electric starters to a hybrid component that can be activated by the driver from the cockpit.

The hybrid system will work in parallel with the internal combustion engines from Honda and Chevrolet, combining growing hybrid technology with the traditional power plants to produce in excess of 900 horsepower for the most competitive racing series in the world.

The hybrid technology will consist of a multi-phase motor, inverter and electric storage device that will create energy recovery from the car’s braking system.

The addition of the hybrid technology to the traditional engine formula will provide some integral benefits for the competitors while enhancing the race action for the fans. In addition to allowing drivers to restart their cars from the cockpit, the system will increase the horsepower of the push-to-pass system and potentially improve the pace and overall time of races.

“It’s an exciting time for INDYCAR with the forthcoming evolution of the cars and innovations like the hybrid powertrain being incorporated into the new engine,” INDYCARPresident Jay Frye said. “As we move toward the future, we will remain true to our racing roots of being fast, loud and authentic, and simultaneously have the ability to add hybridtechnology that is an important element for the series and our engine manufacturers.”

The addition of the hybrid powertrain will push the debut of the new engine formula from 2021 to 2022, realigning it with the arrival of the next-generation chassis as initially scheduled. The move will allow INDYCAR to continue working on other future innovations for the new package as well as extend the window of opportunity for an additional OEM (Original Equipment Manufacturer) to join Chevrolet and Honda in 2022.

“Honda is committed to racing in order to develop people and technologies relevant to the future of our sport and our world,” Honda Performance Development President Ted Klaus said. “INDYCAR offers us the perfect platform to prove out both people and technologies in an environment where measurement of successes and failures is crystal clear.”

“Chevrolet supports delaying the implementation of the revised engine regulations until 2022 to coincide with the NTT IndyCar Series introduction of new technologies with the chassis,” U.S. Vice President of Performance and Motorsports Jim Campbell said. “The partnership between Chevrolet and IndyCar remains a strong platform for showcasing relevant technologies that we incorporate in our production engines, and transfer learnings in performance, reliability and efficiency between the racetrack and the showroom.”

The hybrid powertrain will be integrated into the push-to-pass system and provide a power boost to the tool used by drivers for overtaking on road and street courses. The current system, which is limited to 200 seconds per driver in those events, will gain additional horsepower from the hybrid system to help INDYCAR reach its target goal of achieving 900-plus horsepower for its cars.

From a safety standpoint, the system will improve on-track situations by giving the driver the ability to restart the car quickly should it stall on track. This will help reduce the time the driver and AMR Safety Team are exposed on track as opposed to awaiting a manual restart.

This feature also provides a benefit to the fan experience by potentially helping reduce the number of caution flags for stalled cars on track and leading to improved overall pace and time of races.

The new engine regulations will be in place for six years – 2022 through the 2027 seasons – in a concerted effort to provide a clear vision and stability for the NTT IndyCar Series engine manufacturers and teams. It is a continuation of INDYCAR’s initial five-year strategic competition plan that originated in 2016.

Chevrolet and Honda will continue with the current homologation table through the 2020 and 2021 seasons.