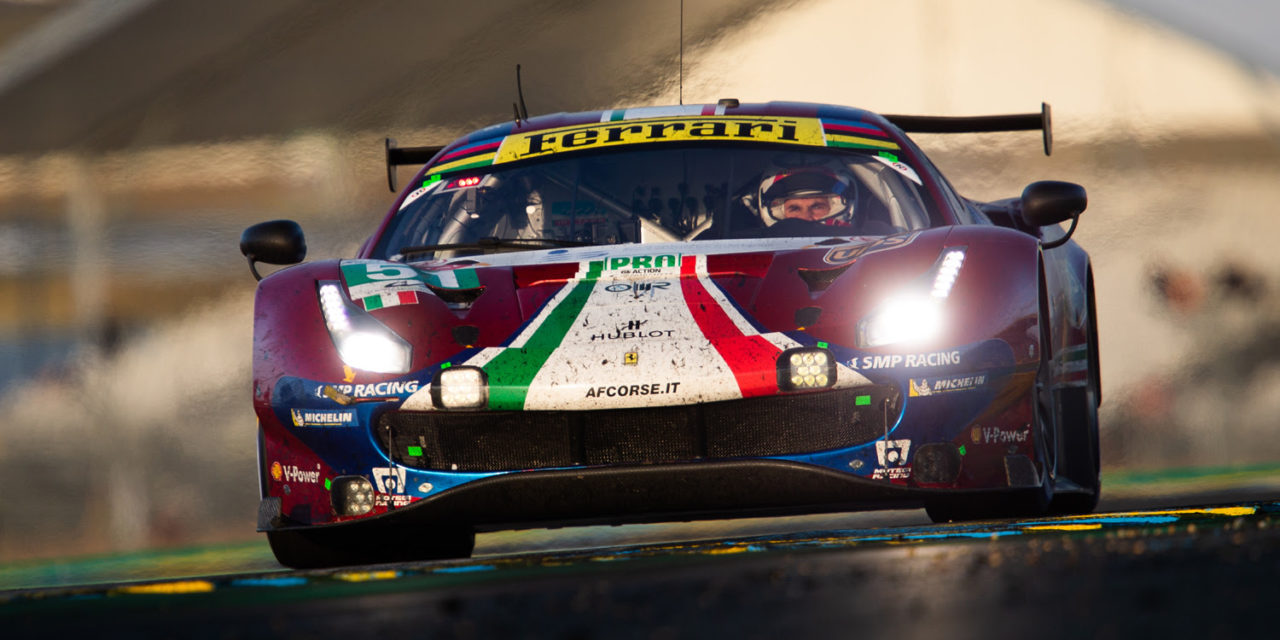 Ferrari could not have chosen a better time or place in which to take its second LMGTE Pro victory of the FIA WEC Super Season: the 24 Hours of Le Mans, the super finale of an incredible season of racing. At the same, Porsche’s Kevin Estre and Michael Christensen needed only to finish in 10th place in the factory-led category to secure the FIA World Endurance GTE Drivers’ Championship.

In front of 252,500 fans, and in the 70th anniversary year of Ferrari’s first victory at Le Mans, Alessandro Pier Guidi, James Calado and Daniel Serra combined to record a cool, calm and collected victory in the No.51 AF Corse Ferrari 488 GTE.  They finished 49.1 seconds ahead of the No.91 Porsche 911 RSR of Gianmaria Bruni, Richard Lietz and Frédéric Makowiecki which was itself just a further 17 seconds in front of the sister Porsche GT Team entry from the USA, No.93.

It was the fifth different GTE manufacturer to win Le Mans in five years and Ferrari’s first victory at La Sarthe since 2014.  In fact, the 87th running of Le Mans was a six-way manufacturer battle from start to finish with Ferrari finishing ahead of all others after 24 hours of non-stop action and constant positional changes.

Porsche wrapped up the GT Manufacturers’ title in Spa and the drivers’ crown came down to either of the Porsche GT Team entries.  However, after being in a commanding position for much of the first 16 hours, Porsche’s No.91 911 RSR dropped out of contention when an exhaust issue forced a costly 20-minute stop.

The win for AF Corse was recompense for the failure of the team’s sister No.71 to finish due to engine failure. They weren’t the only manufacturer to suffer misfortune at Le Mans this year, with Aston Martin Racing – newly announced alongside Toyota as a competitor in the new Hypercar category – having a torrid time.  The No.97 was the only one of the British marque’s three cars to finish, but everyone was more relieved to see Marco Sorensen walk away from a very heavy impact just before the halfway mark.

Ford Chip Ganassi Team UK entered its last race in the WEC as part of a four-strong Ford GT entry, and ended finishing 4th, 5th, 6th and 7th after a race of mixed fortunes.  They, together with Corvette Racing, were challenging through much of the race but it was not to be their year.  The American marque, which has won at Le Mans so many times in the past and competed in 50% of the WEC Super Season, was set to take another victory before bad luck hit the No.63.  Also in its last race was BMW Team MTEK, the German manufacturer also having a race to forget after having made much progress through the season.

At the conclusion of its first full WEC season, Germany’s Team Project 1 finished 2nd in LMGTE Am and sealed the Drivers FIA Endurance Trophy for the class.  Egidio Perfetti, Jörg Bergmeister and Patrick Lindsey had a superbly consistent season to come through for championship honours and will return next season with two entries.

The win went to the Keating Motorsports Ford GT, the first time that a customer entrant has competed with the American, after surviving a late-race penalty and a strong challenge from Bergmeister

The No. 84 JMW Motorsport Ferrari 488 GTE completed the class podium in third, with the next best of the WEC entries being the No.77 Dempsey-Proton Racing Porsche 911 RSR finishing 5th overall.

The class pole-sitting No.88 Dempsey entry hit trouble early on with Satoshi Hoshino spinning from the class lead in the opening hour and then colliding with the No.64 Corvette which resulted in both cars retiring from the race.

Now the Super Season is over and attention turns to Season 8 which begins with the Prologue in Barcelona on 23/24 July and then on to the 4 Hours of Silverstone on 1st September.