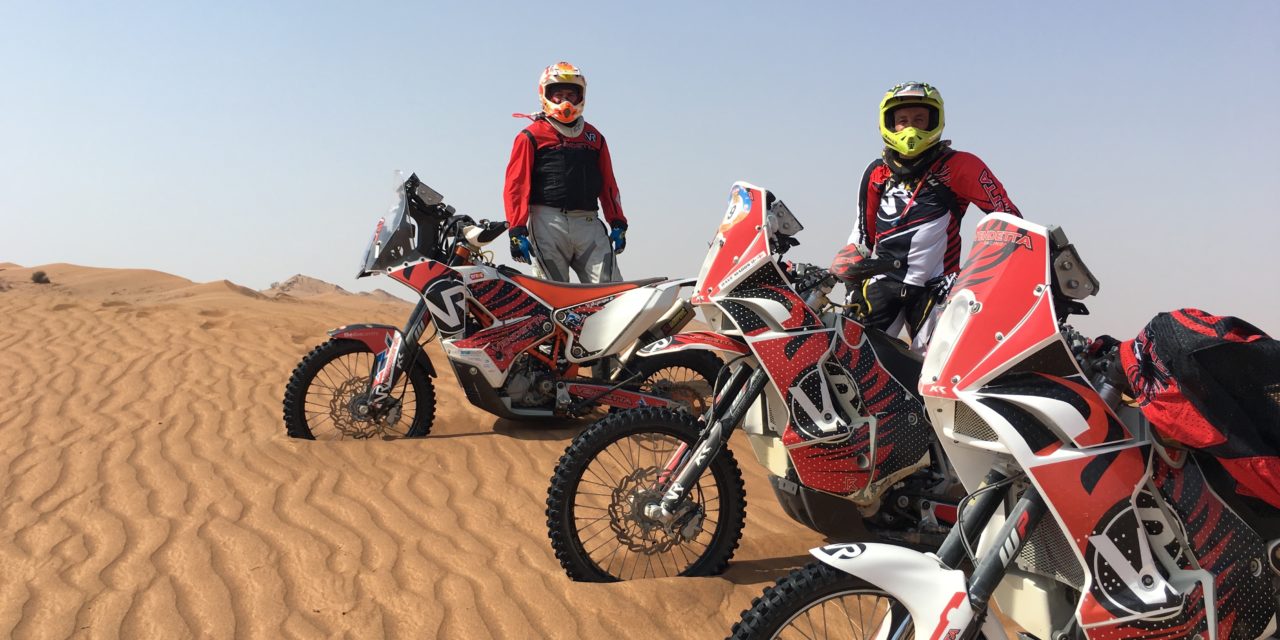 Thanks to its new location in Saudi Arabia, the Dakar has suddenly become more accessible to UAE racers, a fact that Vendetta, a long-time competitor on the regional bike racing landscape, is keen to exploit.

Alan Boyter, Vendetta Racing’s founder and manager said the opportunity of seeing riders compete under the Vendetta banner at the world’s most famous and demanding rally raid was too good to pass up.

“The Dakar Rally is one of the biggest challenges, not only in motor sport but in world sport,” said Boyter, a former runner up UAE Sportsbike Champion and veteran of four Abu Dhabi Desert Challenges. “Until now racing the Dakar has been out of our reach, but with the news that the rally is leaving South America after eleven years for a new era in Saudi Arabia, we realised we couldn’t let this chance pass us by.”

Vendetta’s announcement coincides with the opening of the Dakar registration process last week. The rally, which was inaugurated in 1978, will get underway from Saudi Arabia’s second largest city, Jeddah on January 5, 2020, following three days of scrutineering, although Boyter and his riders know they have plenty of work to do before they take their place on the start line.

“Vendetta is committed to entering the strongest regional team into this event and our preparations are well underway,” said Boyter, who named David McBride, Dave Mabbs, as  their core riders with another four positions to be confirmed.

“As you can imagine, the logistics for an event like this are immense,” he said. “This is not a cheap undertaking and we will be looking for sponsors and support.  Our riders will also embark on training programmes in order to withstand the physical punishment of racing 9,000km through some of the world’s toughest terrain.

Despite the challenges Vendetta is well-placed to assemble a force to be reckoned with. The team boasts a wealth of desert racing experience. Its current riders have participated in a combined 41 Abu Dhabi Desert Challenges. Vendetta has sent bikes out for the five-day, 2,000km race through the dunes of Abu Dhabi’s Rub Al Khali, or Empty Quarter, since 2013 and some of the team were competing in the event before Vendetta was formed in 2007.

A team of accomplished amateurs, who all race and train around their full-time jobs, Vendetta regularly challenges riders from the bigger budget and factory racing outfits. Vendetta is often to be found inside the overall top ten at the Abu Dhabi Desert Challenge and came away with the Team Prize at the 2019 renewal which they also won in 2016.

Riders from Vendetta have completed a number of overseas events, including the Africa Eco Race, which follows the spirit of the original Paris-Dakar Rally route, most rounds of the FIM Cross Country World Championship including Qatar, Chile and Morocco and all the local baja events.  Prior to racing off-road events, Vendetta competed in a host of track and road based events including the Isle of Man TT road race.

“The Abu Dhabi Desert Challenge is the biggest international sand event on the FIM Rally Championship calendar and has long been used as a proving ground for factory teams heading to the Dakar,” said Boyter.

“Vendetta is in the privileged position of having the crew, the logistical expertise and the riders to contest this race. Week in and week out we are lucky enough to train in very similar conditions to those we will encounter in Saudi. We take nothing for granted though. Simply crossing the finish line is considered an enormous achievement in the Dakar Rally and we know we have a mountain to climb before we even get to the start line and are prepared to do what it takes.”

Dave McBride – a 21-time Abu Dhabi Desert Challenge participant, who has come away with more than his fair share of top ten results. McBride has also competed at the Roof of Africa Rally, Botswana Toyota 1000 and the Qatar, Chilean and Moroccan rounds of the FIM Cross Country World Championship.

David Mabbs – an accomplished rally driver turned biker who was most recently seen finishing a highly credible ninth in class at the 2019 Africa Eco Rally, an event which traces the spirit of the original Paris-Dakar Rally. Mabbs has competed in 16 Abu Dhabi Desert Challenges and went on to contest the Qatari, Chilean and Moroccan rounds of the FIM Cross Country World Championship in 2018.

For more information on our core riders, visit the website  https://www.vendettaracinguae.com/vr-riders

Updates on the remaining four riders on the Dakar page of the website as they are confirmed.  https://www.vendettaracinguae.com/dakar