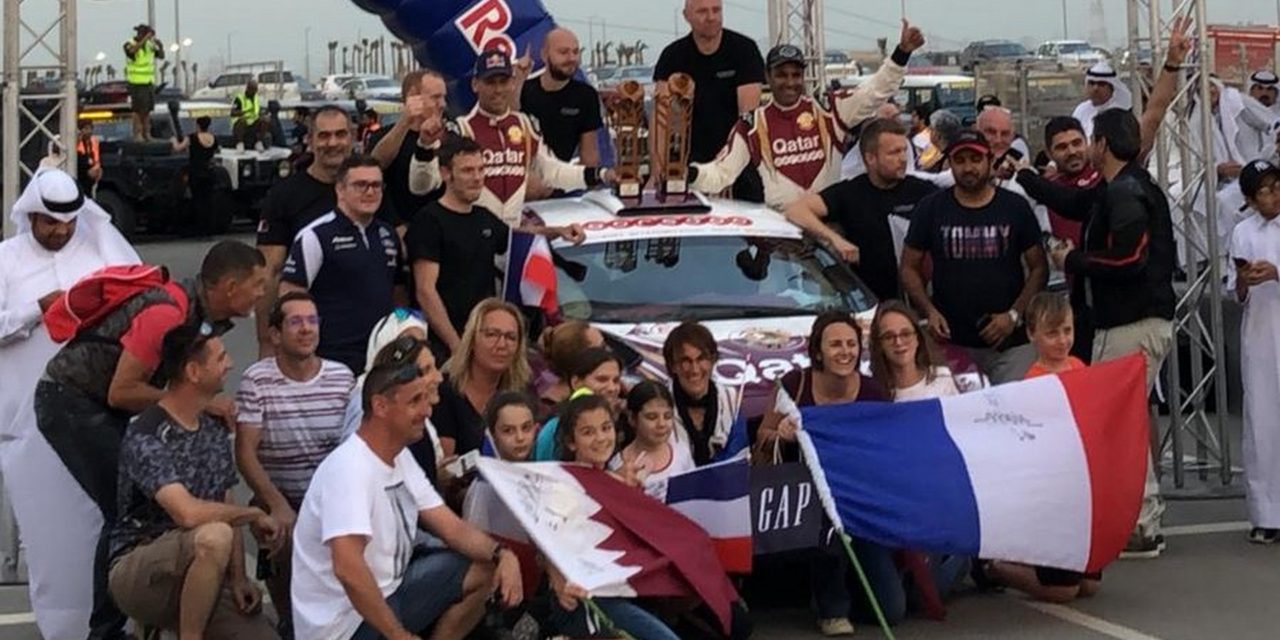 The Qatari’s seventh win in Kuwait and his 69th career MERC win (68 rally wins) secured the record-breaking 14th regional title by the margin of 12min 19.2sec.

Al-Attiyah now has the record for the number of MERC titles to himself after FIA official Jerôme Roussel examined the archives recently and confirmed that the 1989 regional series had been cancelled because only three rallies had taken place (*see footnote below) and Dubai driver Mohammed Ben Sulayem had actually won 13th official championship titles.

Al-Attiyah’s French co-driver Matthieu Baumel secured his third regional title and his 17th MERC event win to move ahead of John Spiller and into third in the regional Hall of Fame behind Ronan Morgan, Chris Patterson and Giovanni Bernacchini. The success also marked an astonishing 15th regional title in 16 seasons for Ken Skidmore’s Autotek Motorsport operation, which also guided the late Misfer Al-Marri to the title in 2010.

“This a fantastic result for me and the whole team after another excellent season,” said Al-Attiyah. “To break the long-standing record is very satisfying. There have been many memories along the way and many battles with some great drivers. Now we can look to the future and pushing ahead with more records of our own.”

Kuwaiti driver Meshari Al-Thefiri and Nasser Al-Kuwari began the day in second overall and the local star drove at a measured pace to confirm his fourth MERC 2/Group N title in the regional series. Victory in his home event continues to elude the Mitsubishi driver, however. His father Ahmed Al-Thefiri remains the only Kuwaiti national ever to win the event – at the wheel of a Datsun Violet before the MERC was formed back in 1981. 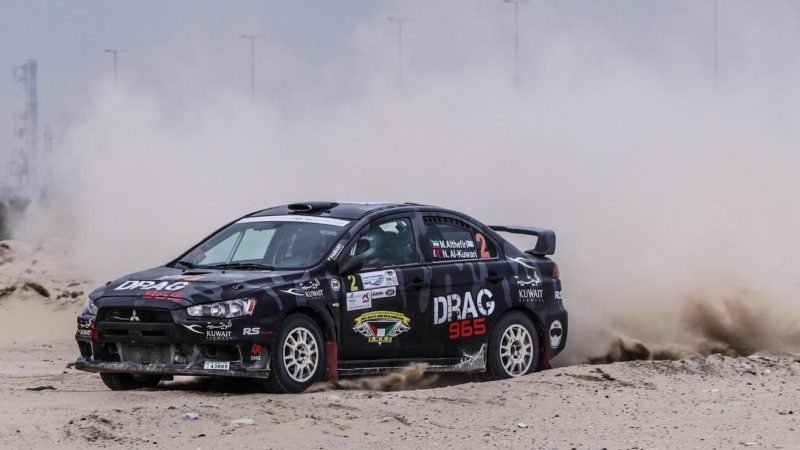 Lebanon’s Henry Kahy and Jordanian navigator Musa Djiyerian celebrated the driver’s first MERC 3 title success in a two-wheel drive Škoda Fabia, although the category win secured a second successive series triumph for his navigator – Musa had co-driven fellow Jordanian Asem Aref to the title in 2017. The duo reached the finish in seventh overall. 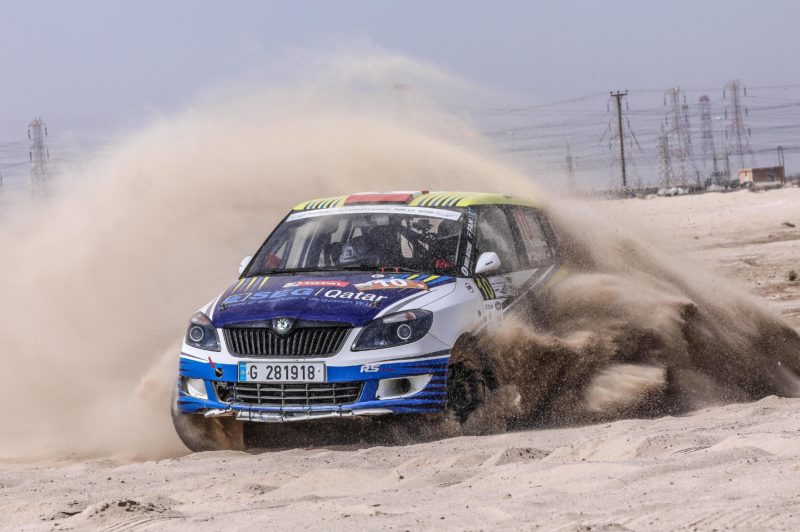 Nasser Khalifa Al-Attiyah hadn’t taken part in an MERC event since the 2007 Dubai International Rally, but the former QMMF President and FIA Vice-President acclimatised to the tricky conditions with aplomb. Despite missing out on points for finishing the opening leg because of a differential issue, he and Italian navigator Nicola Arena bounced back to round off the podium positions.

Vojt?ch Štajf’s missed out on the regional title, but the Czech has enjoyed an impressive debut season in the regional series and pushed Al-Attiyah hard on some stages. He has already secured the runner-up spot in the championship and rewarded his mechanics’ hard work on Friday afternoon with a solid fourth-placed finish in his Škoda Fabia R5.

Friday’s stages decimated the field and all but three teams returned to action under the Rally 2 ruling. Jordanian driver Khaled Juma reached the finish in fifth position and Oman’s Abdullah Al-Rawahi overcame his misfire issues to finish sixth in the sole Subaru Impreza.

Soft sand pushed Qatar’s Rashed Al-Nuami down to 10th position after as many stages and he retired before the start of the second loop. The Jordanian duo of Ihad Al-Shorafa and Shabi Shaban rounded off the finishers in eighth and ninth overall.

The Kuwaiti pairing of Jassim Al-Muqahwi and Tamer Al-Mutairi were not eligible for the FIA event, but they pedalled their Mitsubishi to the National category win and would have been fourth overall in the international.

This year’s event was organised by the Basil Salem Al-Sabah Motor Racing Club (BMRC) under the chairmanship of Sheikh Athbi Nayef Jaber Al-Ahmad Al-Sabah and in conjunction with the General Authority for Sport and the Kuwait International Automobile Club (KIAC). Zain Kuwait was the main sponsor.

Saturday – as it happened

The remaining six special stages took place in the southern deserts. Action got underway with the 11.88km of the Bnader special. Štajf had fallen by the wayside on Friday with a broken damper, but the Czech mechanics did a superb job to keep his title hopes alive and the R5 was repaired in time for the restart.

Al-Attiyah had still not secured the title. He started the day with a 39-point lead over his rival, but his Autotek team were fully aware that the Qatari needed to complete the second leg to win the championship. A non-finish would keep the door open for Štajf, provided he too could reach the end of the final stage and Parc Fermé.

Al-Attiyah began the day with a lead of 8min 03.9sec and extended that to 8min 47.4sec with the fastest time of 7min 39.5sec on the opener. Štajf lost his way on the special and his delay enabled Al-Thefiri and Oman’s Abdullah Al-Rawahi to set the second and third quickest times. Kahy safely negotiated the special but slipped from third to sixth overall when all the Rally 2 entrants returned to the rankings.

The Julai’a stage ran for 13.03km and the Qatari romped to a ninth successive fastest time to increase his lead to 9min 13.3sec. Štajf consolidated his hold on fourth place with the second fastest time and Al-Nuami moved in front of  fellow Rally 2 runner Ihab Al-Shorafa to snatch ninth.

The 17.42km of Arifjan was the last stage before the return to Kuwait Motor Town and a time of 11min 10.4sec enabled Al-Attiyah to return to service with a lead of 9min 48.9sec. Rashed Al-Nuami became bogged down in soft sand, lost around 10 minutes and plummeted to 10th position.

Al-Attiyah said: “No problems this morning, we are just managing the pace. Three stages to go. The conditions are similar to yesterday. The visibility is not that clear.”

Al-Thefiri’s co-driver Nasser Al-Kuwari said: “All good for us, except we had a damaged tyre after the second stage and we changed it before Arifjan.”

The three stages were repeated in the afternoon. Al-Attiyah was three seconds slower on his second run through Bnader, but it was a trouble free run for the Qatari. The leading quintet held station in the overall rankings heading to the re-run of Julai’a, but a charging Al-Rawahi pushed Kahy down to seventh place, while Al-Nuami failed to restart after the lunch halt.

There were no major dramas on the penultimate stage and Al-Attiyah held on to seal the title and his seventh win in Kuwait, as Al-Thefiri and Kahy wrapped up the MERC 2 and 3 titles.

The 2018 MERC reaches a conclusion with the Manateq International Rally of Qatar on November 15-17.

2018 FIA MERC Junior Championship for Drivers – positions after round 4:

In 1989, Mohammed Ben Sulayem won one of the three rallies in Kuwait and took second places in Qatar and Dubai behind Saeed Al-Hajri and the late Björn Waldegård. Two-thirds (66.6%) of the events needed to take place in the 1989 FIA regulations for the series to be validated.

Three rallies in Jordan, Oman and Lebanon were actually cancelled that year for different reasons and only 50% of the events taking place meant that the series was officially cancelled. This was declared in an FIA bulletin issued at the time.