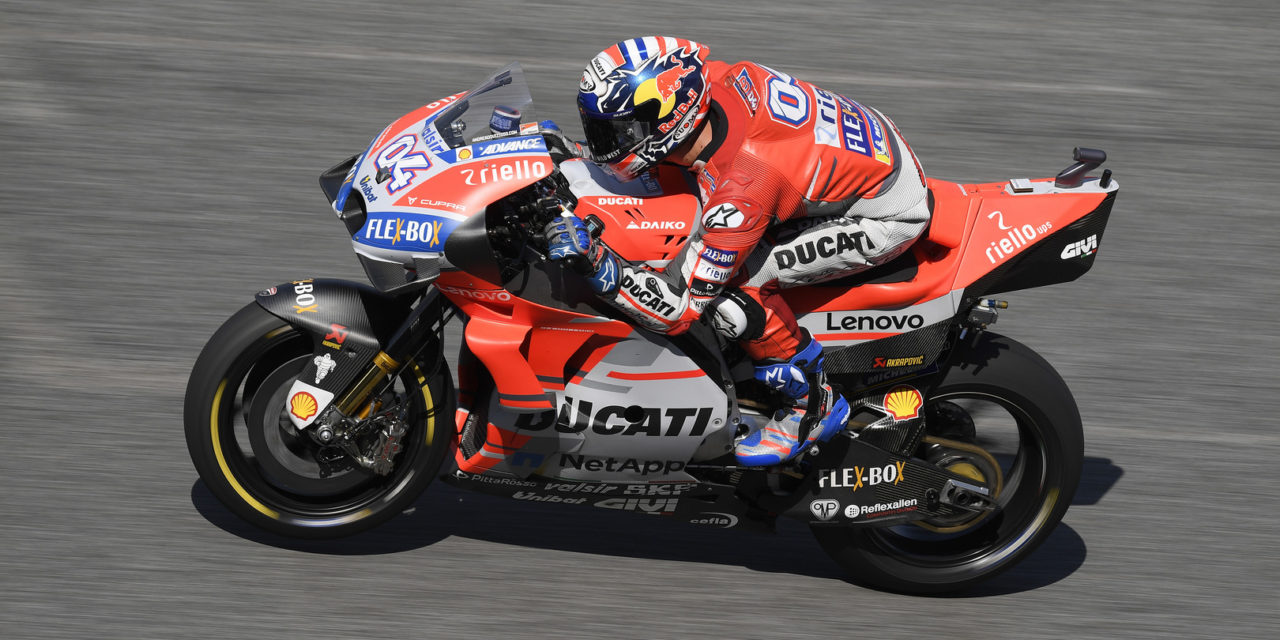 How close do you like it? After Day 1 at the PTT Thailand Grand Prix it’s less than a tenth that splits the top four and Andrea Dovizioso (Ducati Team) who finishes Friday as the fastest man at Buriram. The Italian was only 0.031 faster than FP1’s quickest rider Maverick Viñales (Movistar Yamaha MotoGP), however, and top Independent Team rider Cal Crutchlow (LCR Honda Castrol) was close – with reigning Champion Marc Marquez (Repsol Honda Team) in P4 and only 0.098 in arrears. It was far from lonely at the top.

Despite the tight timesheets, one of the biggest headlines of the day was a huge crash for Jorge Lorenzo (Ducati Team) as the Spaniard fell at Turn 3 in the afternoon. Launched over the highside, he later confirmed it was a technical issue that caused the crash. Lorenzo was taken to the Medical Centre for a check up and then hospital in Buriram but declared fit. It did, however, put a dent in his attempts to move into that all-important top ten – and the Spaniard is already riding through the pain barrier following his Turn 1 crash at Aragon.

Andrea Dovizioso (Ducati Team #04) – 1st (1’31.090)
“Today it went quite well. This morning the track conditions weren’t easy and we were struggling a bit, but in the afternoon we were able to make a step forward and my feeling improved. It’s still not enough because Marquez, and not only him, has an excellent pace and there are quite a few riders with good speed. We are all very close on lap times and so there’s still a lot of work to do. Let’s see what track conditions we will find tomorrow but, as I said, even though the feeling is a good one we still have to improve.”

Jorge Lorenzo (Ducati Team #99) – 16th (1’32.027)
“It was another tough day for me. I was surprised by the fact that the rear wheel went away suddenly and I crashed so violently after a high side. Luckily, and this is the most important thing, the checks confirmed that I’ve got nothing broken, but just a bruised left wrist and right ankle. I’ve been told that the cause was a technical problem that the team are still looking into, and tomorrow morning as soon as I get up I’ll see if I can race or not. I want to see how the night goes before taking the best decision.”

Back to the front and the gaps remained minimal. Fifth on the combined timesheets was Danilo Petrucci (Alma Pramac Racing), who finished 0.050 behind Marquez to improve from P9 in FP1, with Andrea Iannone (Team Suzuki Ecstar) a further 0.018 in arrears despite a fast crash at Turn 4 in FP2. Alvaro Bautista (Angel Nieto Team) managed to string a strong second Free Practice session together to end the day seventh fastest, a big improvement from the Spaniard’s P16 result in FP1. He suffered a small crash at Turn 3 but is ok.

Buriram’s fastest in testing, Dani Pedrosa (Repsol Honda Team), ended the opening day in eighth after the three-time World Champion improved from P13 in the morning and finished just 0.295 from Dovi’s P1 time. Just behind the Spaniard was FP1’s second quickest man Valentino Rossi (Movistar Yamaha MotoGP), who sits in a provisional Q2 place in ninth and sported Yamaha’s new fairing. Fellow YZR-M1 rider Johann Zarco (Monster Yamaha Tech 3), meanwhile, left it late to grab tenth, ending the day 0.023 off Rossi and 0.331 behind Dovizioso in a tight top ten – much to the chagrin of Jack Miller (Alma Pramac Racing), who was the man to just lose out.

Franco Morbidelli (EG 0,0 Marc VDS) was top rookie in P12 ahead of the man who was the fastest debutant at the test, Takaaki Nakagami (LCR Honda Idemitsu), with Bradley Smith (Red Bull KTM Factory Racing) and Alex Rins (Team Suzuki Ecstar) locking out the fastest fifteen on Friday. After his crash, Lorenzo was P16.

With less than a tenth splitting the top four and a second separating the top 17, there’s everything to play for on Saturday. Tune in for FP3 as the premier class fight it out for that all-important automatic entry to Q2 at 09:55 local time (GMT +7), before qualifying begins at 14:10 local time in Buriram.