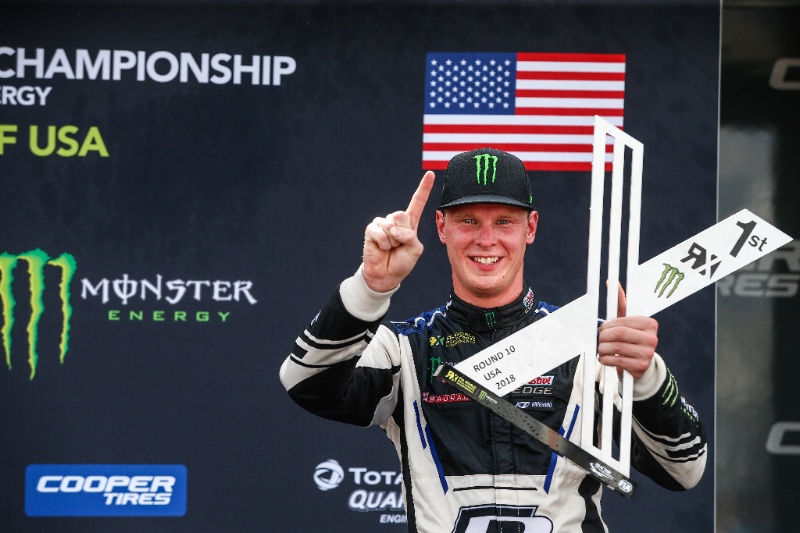 Swedish driver Johan Kristoffersson put the World RX Drivers’ Championship out of the reach of his rivals in the semi-final stages of the event, then overtook team mate – two-time World RX Champion Petter Solberg – to win the final.

18,500 spectators witnessed the first World RX event to be held in the USA and it was former Champions Solberg – who had been Top Qualifier – and EKS Audi Sport’s Mattias Ekstrom who lined up on the front row of the grid for the final. Solberg took the lead into the first corner as Ekstrom claimed the Monster Energy Supercharge Award for having the fastest reaction time at the start in his Audi S1 and headed straight for the joker lap.

Starting on the second row, Kristoffersson passed Ekstrom at the first corner in his Volkswagen Polo R and set about his pursuit of leaders Solberg and EKS’ Andreas Bakkerud. Solberg took his joker on lap two and stayed ahead of Kristoffersson, then retook the lead on lap four when Bakkerud played his joker. Kristoffersson moved into the lead when Solberg made a mistake on lap five and won the race ahead Solberg and Bakkerud. “The team gave me a great car this weekend and I felt really strong from first practice. Then I got a little bit stuck in traffic in Q1 so it didn’t look so good to secure the Championship here,” explained Kristoffersson. “Q2 was strong, the team gave me a very good car again for Q3. I won Q4 and then in the semi-final I had a really good tyre strategy. I made the pass on Mattias in the final which was crucial to be on the podium, then Petter had a small, small mistake and that was enough to win. I have to give a big thanks to Petter and the whole team for making this possible.”

The one-two finish for the PSRX Volkswagen Sweden team extended its lead in the Teams’ Championship. “It was very close, I did a mistake on the brakes and that’s it. But still I’m really pleased with the performance this weekend,” said Solberg. “Congratulations to Johan, I’m very happy for him to be World Champion in my team. For me it means a lot that he has been so consistent with no technical failures which is good from Volkswagen’s side. I think we have done a pretty good job and now I hope I will be even stronger for the next race.”

For Bakkerud, COTA was the scene of his fifth podium of the season. “I felt like I had all the odds against me this weekend because I was starting fifth, fifth, fourth and then fifth again and I had to use my new tyres to recover that,” said Bakkerud. “In the semi-final against Loeb and Mattias they had new tyres and I had used (tyres) – I felt I was getting closer but the in last two laps my tyres were dead. I tried everything I could and I’m happy that I managed to get to the final and the podium. Regarding the next round at Buxtehude (Germany), I know the Audi is working very well there, we have also done a good job and for sure the fight for second in the points is going to be a lot of fun to watch.”

Team Peugeot Total’s Sebastien Loeb finished fourth and Ekstrom was classified fifth after Peugeot’s Timmy Hansen was given a five-second penalty for an incident in the final with the Audi driver. GRX Taneco’s Niclas Gronholm and Team Peugeot Total’s Kevin Hansen finished fourth in the semi-finals and just missed a place the final. Both GC Kompetition drivers, France’s Guerlain Chicherit and Sweden’s Anton Marklund made the semis. Chicherit was slowed with a left-rear suspension problem in semi-final one and Marklund finished sixth in semi-final two, just behind Olsbergs MSE’s Kevin Eriksson. Team STARD’s Janis Baumanis also qualified for the semis and finished fifth in semi-final one.

Volkswagen Andretti Rallycross’ Scott Speed claimed the inaugural Americas Rallycross (ARX) title by qualifying for the final at the season finale in COTA, before finishing second in the final to Tanner Foust, who took maximum points from the last event of the year. Canadian Steve Arpin secured his first ARX podium in the Loenbro Hoonigan team’s Ford Focus RS RX. Subaru Rally Team USA’s Toomas “Topi” Heikkinen and Patrik Sandell finished fourth and fifth and Ken Block was classified sixth but retired a few metres off the start line in the final.

In the ARX2 single-make support category, Conner Martell claimed the title by winning his semi-final in round five on Sunday of the double-header weekend for the class. Alex Keyes scooped up a pair of wins from the two rounds as Martell and Scott Andersson finished on the podium in round four and Fraser McConnell and Christian Brooks completed the top three in round five.

Paul Bellamy, World RX Managing Director for IMG, concluded: “We are delighted to have held the first round of World Rallycross in the USA, especially at a first-class facility such as COTA, the kind of venue where this sport deserves to be. The reception the fans here gave us and the way they engaged with the racing was fantastic. There was a brilliant vibe in the paddock on Sunday and we have a fantastic platform to build for the future of the sport in the USA. Holding FIA World Championship events along with top level music acts like Ludacris – who headlined at COTA on Saturday evening – and with manufacturers such as Volkswagen and Subaru running passenger rides is the kind of modern event we are building for the twenty-first century audience. Congratulations to Johan (Kristoffersson) for securing the FIA World Rallycross Drivers’ Championship, he has been the class of the field this year and is a fully-deserving double World Champion.”

Full Championship standings can be found at the following link:
www.fiaworldrallycross.com/ standings