MotoGP: Riders gear up for the Gran Premio Movistar de Aragon with ‘Turn 10’ named after Marquez 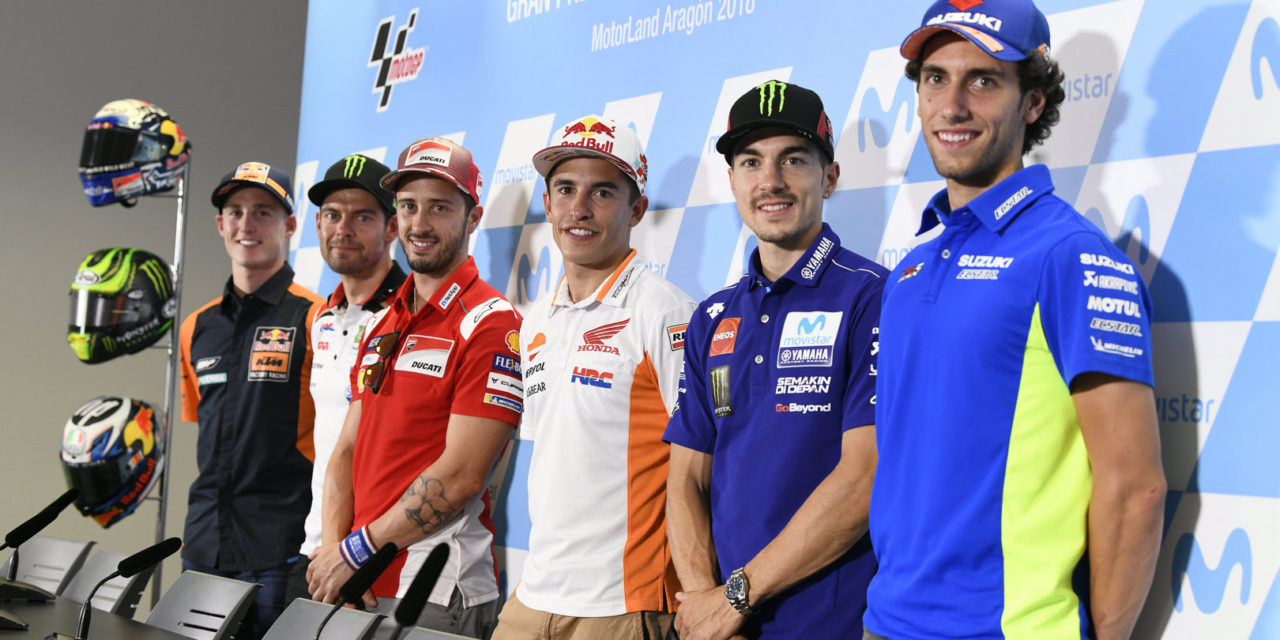 Ahead of the Gran Premio Movistar de Aragon, Championship leader Marc Marquez (Repsol Honda Team) was joined by closest challenger Andrea Dovizioso (Ducati Team), Maverick Viñales (Movistar Yamaha MotoGP), Cal Crutchlow (LCR Honda Castrol), Alex Rins (Team Suzuki Ecstar) and Pol Espargaro (Red Bull KTM Factory Racing) for the Press Conference to preview the weekend ahead – but that was after an earlier event in the day that saw a corner at the venue get renamed after a very familiar face.

“One of my favourite tracks” is always Marquez’ line on MotorLand and so it was fitting that Turn 10 – a left-hander – now bears the name of the number 93 as he became the second current rider on the grid to receive the honour. The other? The final corner at the Circuito de Jerez-Angel Nieto was named after key rival Jorge Lorenzo in 2013. So once the renaming ceremony was over and Marquez was back at paddock level, it wasn’t long until the Press Conference began. As usual, the talk first debriefed the previous race, in this case Misano, before looking ahead.

“It was a great weekend for us in Misano; 20 points and then we had a good test on Monday,” began Marquez. “Today we’ve started in a good way with a corner in my name at one of my favourite circuits. We will see, it will be a good feeling the first time going through there! Now though it’s time to concentrate on the race weekend. Time to focus, it’s a home GP and I love the circuit but we’ll see where the our level is…” Marquez and his fan club celebrate the occasion

Marquez was also asked about his form – which has mirrored a few stats from his stunning 2014 season of late – and says the biggest difference between then and now is a simple one: experience. “Experience, both mine and that of the team. We’re having a great season so far but we need to continue like this and not be nervous or crash, stay calm and try to keep the same style. I’d like to win on Sunday like every Sunday but if it’s not possible we need to finish on the podium.” The reigning Champion was adamant, “the main target is to finish on the podium.”

One man who could be battling with Marquez for that win on Sunday – like many a Sunday – is the rider who became his closest challenger following that impressive Misano victory: Dovizioso. He’s in good form of late too.

“I’m very confident, especially from the test in Misano, I think we showed good speed. And at Silverstone we had a good chance,” begins ‘DesmoDovi’ “The test here was very good; the weather wasn’t the same for everyone and Honda weren’t here but the feeling was very different to last year. We’re in a different situation this year and from the first exit the speed was much better. I think we’ll have similar speed to the last few races but consumption will decide the result…”

Asked a little later to expand upon the progress Ducati have made, the Italian explained it simply. “We were focused on improving our problems and the consequence is good results.” And the future? A similar approach: “We’re focused on improving our situation even more, to try and get the maximum out of this year but also next year because work we put in now we can use then.”

The Italian also spoke about the prospect of coming home runner up in the Championship, and beating a teammate who’s taken huge steps forward this season – but again it’s all about the details. “It’s always important to beat your teammate and being second in the Championship is important but we’re fighting Jorge and Valentino, so it will be very difficult. But we haven’t given up in the season,” affirms the Misano winner. “In the middle we didn’t feel so good so we worked on the details, we found something and now we’re in a good situation.”

A good situation was what Maverick Viñales had at Misano, with a much-improved weekend for the Spaniard overall. Race day wasn’t quite what they’d been hoping for, but it was nevertheless a positive. “I was really happy after Misano, the race I think we could have gone better but from Friday I was there,” says Viñales. “It was much better, I had a really good feeling with the bike and the setup and all the time on the bike I felt good. That’s the most important thing.”

And the most important for the season? Aiming at a win.

“For me the most important is to try and take a victory this year,” explained the Spaniard when asked if focus had begun to switch to 2019. “We have to focus now, here, trying to solve the problems we had in the race at Misano and fingers crossed we can fight to try and win the race.”

Next up, it was Cal Crutchlow on the mic. The Briton is on one of his best runs for a few seasons but the Argentina winner says he still wants more. “I don’t know if I feel stronger on the bike particularly,” says the Englishman when asked about his form. “The team have been working really well and it’s nice to be on a good run but I think we’ve missed a few chances to be on the podium this year. I think we could have been further up in the Championship if I hadn’t made some mistakes or made some bad decisions.”

And a target looking ahead even further past this season, with a contract done and dusted? “Try and get faster! When Marc won 10 in a row I’m sure he still wanted to go faster. This is how we live in motorsport, you always want to go as fast as possible. In these two years I’d always want to get faster; not leave because I got slower.”

That mission to get faster and make progress is one shared by all those on the grid and especially Team Suzuki Ecstar this season, with the Hamamatsu factory pushing hard to get into that front group on a weekly basis. Alex Rins – who’s from very close to MotorLand – says they have good “possibilities” at his home track.

“I think Misano was a good weekend for us, trying to improve our bike and in the race one of the keys was the start, trying to start well and get into a good position. Then in my rhythm I was trying to just forget everything and ride and ride and ride, and fourth I think is a great result for us. We arrive at MotorLand for our home GP with good possibilities.”

The Spaniard also mentioned that Suzuki are already looking a lot at next season: “The category is so difficult we’re fighting with the best in the world, we’re improving the bike and focusing a lot on next year. Our target is to always be near the front but sometimes I’ve made some mistakes and sometimes the bike isn’t quite there. We need to find some consistency.”

Finally, another home hero closed out the opening statements – Pol Espargaro (Red Bull KTM Factory Racing). Out through injury and then back at Misano, the number 44 didn’t make it to the finish line there, but now he says he’s much closer to 100%.

“It was a tough weekend, it was a while since I’d been on the bike before Misano and when you come back you realise how fast these guys are! I tried my best but it was impossible to finish,” lamented the Spaniard. But it wasn’t that simple – it was also a case of shifting focus a little: “I had testing after that which was even more important,” explains Espargaro of the retirement, “and to come back here at almost 100% feels good.”

Almost 100% bodes well, and it could prove a good reset for KTM after a difficult patch for the Austrian factory. Espargaro affirms he’s ready to take back the reins: “We’ve had some back luck and timing, I missed Austria – KTM’s home race – Mika got injured, my teammate is leaving…it’ never easy this situation but I tried as hard as possible to be on the bike at Misano to help the team. I was working hard to be ready and now I am.”

And so are we, with bikes on track for first contact on Friday morning ahead of the race on Sunday. Will Marquez rule a home venue with his name now inked on Turn 10? Or can the field begin a fight back before the flyaways? Find out from 14:00 (GMT +2) on Sunday.