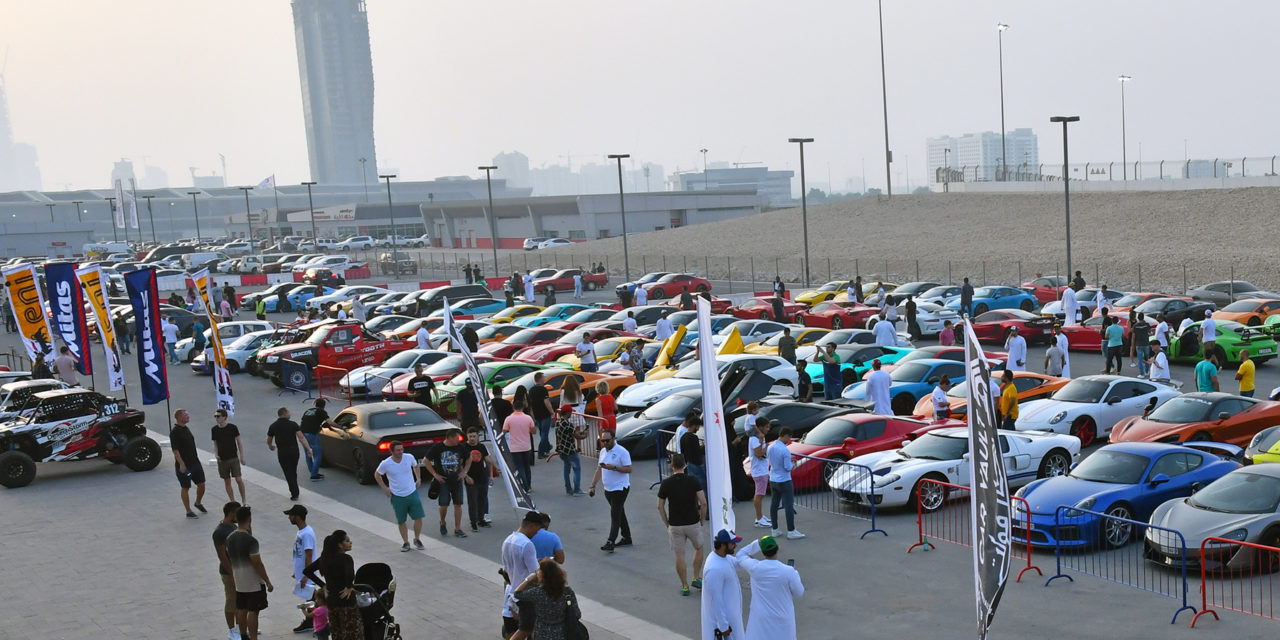 Dubai, UAE, 16 September 2018: Motorsport enthusiasts from around the region crowded into the race paddock at Dubai Autodrome on Friday (14 September) to enjoy the sights and sounds of the third annual Emirates Motorsport Expo (EME).
Over 60 exhibitors representing teams, competitors and championship series were on hand to greet more than 5,000 guests throughout the day and evening. In addition to the exhibitors, the event featured car displays, food trucks, sim racing, a live DJ, and motorsport activities.
The EME opened with the Automobile and Touring Club of the UAE (ATCUAE) officially announcing the 2018-2019 UAE Motorsport Calendar. The press conference was headed by ATCUAE General Manager, Matthew Norman, Dubai Autodrome General Manager Faisal Al Sahlawi and Yas Marina Circuit CEO, Al Tareq Al Ameri.
Key announcements included the new NGK UAE Touring Car Championship (NGK UAE TCC), which expands upon the successful touring car segment from the previous NGK Racing Series. The NGK UAE TCC will feature multiple classes, including a newly supported “Renault Clio Cup Class powered by Renault Middle East.”
Other series to debut at Dubai Autodrome this season will include the Gulf Sports Car Championship, Gulf Historic, the 10H Dubai and the 6H Dubai.
Many fan favourites are set to return to the track calendar. The Gulf Racial Cup returns to its original promoter, GulfSport Racing. The Lamborghini Super Trofeo Middle East thunders back onto the scene, as well as TCR Middle East, and the newly branded Porsche BWT GT3 Cup Challenge Middle East.
Three formula categories return from successful seasons, with the FIA F4 UAE Championship, MRF F2000 and the Formula Gulf Academy all coming back to Dubai Autodrome.
Two-wheeled aficionados will welcome back the Bahrain Superbike Championship, as well as the UAE National Motorcycle Championship, which was previously known as the UAE Sportbike Championship.
The karting calendar will be quite full, with a wide range of race events to feature at Dubai Kartdrome. Kids just getting started in karting can try the Bambino Cup powered by IAME and then move into the student categories of the Emirates Schools Karting Championship (ESKC) or perhaps the Sodi World Series (SWS) Junior Cup Sprint Races.
Leisure kart racers expanding their skills can compete in the SWS Senior Cup Sprint Races or take on endurance racing in the Dubai Kartdrome Endurance Championship. For those going pro, there are rounds of the Rotax Max Challenge, IAME X30 Challenge and the pinnacle event of the year, the Dubai O Plate.
While announcements were being made in the hospitality suites, there were plenty of activities on track, in the pit garages and in the race paddock to keep spectators busy. Sim racing, passenger rides and Easy Drift rides provided thrills while aspiring photographers kept busy at the displays showcasing a unique selection of new cars, classics and rare vehicles.
The new Power Hour Challenge debuted at the EME this year, which allowed spectators to get up-close to a unique selection of race cars in action on track, including a 1962 Jaguar E-Type, a 1935 Bugatti, a Praga R1, a pair of Ford GTs, a 2001 Arrows F1, a Ferrari F40 and a world-record holding ProDrift Nissan GTR with 1,390 BHP.