MotoGP: King of the Ring: Marquez takes ninth Sachsenring win in style with Rossi and Vinales on podium 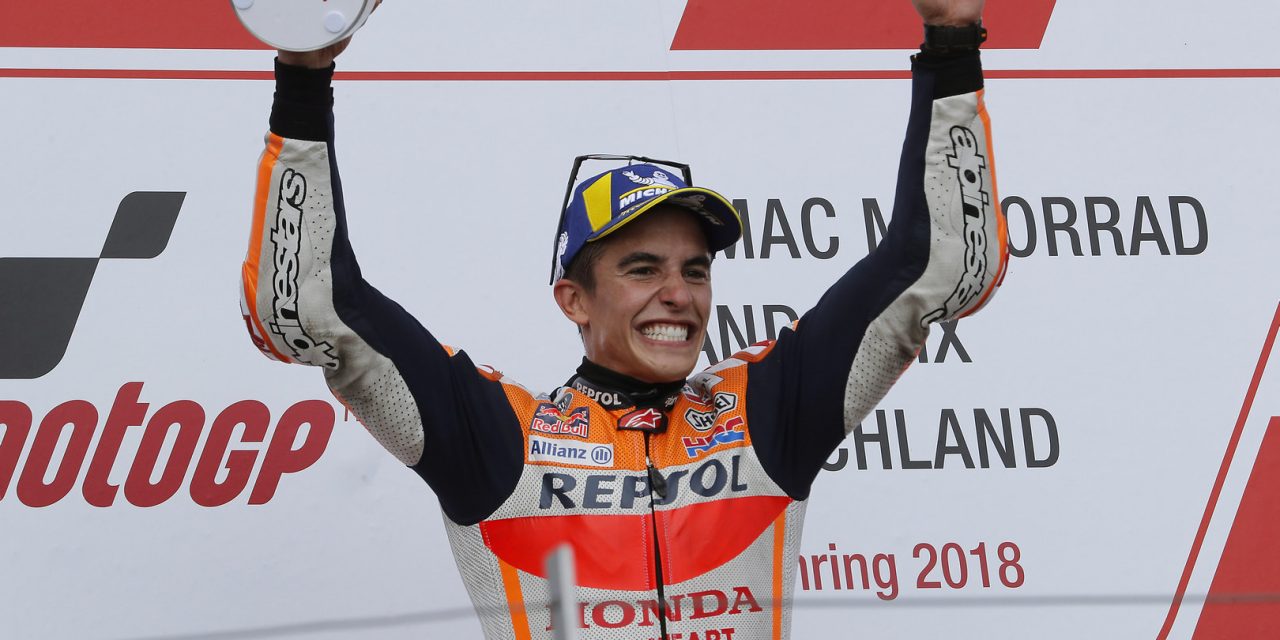 A tactical masterclass saw the number 93 able to pull clear to take an incredible ninth German GP win in a row – from his ninth pole.

Marc Marquez (Repsol Honda Team) has re-written another piece of history in the Pramac Motorrad Grand Prix Deutschland, storming the Sachsenring from a ninth pole in a row to take his ninth win in a row across all classes. Valentino Rossi (Movistar Yamaha MotoG) took second and maintains his second place in the standings after an impressive bounce back after a tough Friday at the track, with the podium completed by teammate Maverick Viñales.

Marc Marquez- Of course I’m very happy, as nine wins in a row here is incredible! But every year the pressure increases, because beginning on Thursday, everyone starts asking about winning on Sunday! Anyway, we have the experience to handle that as well. Today I expected the race to have different phases, with the first tyre drop happening after around nine laps and a final one seven to five laps from the end. I was prepared to manage the different situations, but in the beginning it wasn’t easy because my start wasn’t perfect. I expected that Lorenzo might pass me but not Petrucci. I lost two positions and then overtaking them wasn’t easy. When I did it, I started to push in order to pull a gap but without being ‘crazy’ so that I could manage the tyre consumption until the end of the race.

But then they signalled me that Valentino was closing in very fast, and when I saw 0.6 in the board I understood that I had to push again and completely use my tyres for two or three laps, so I did my fastest lap of the race. I was able to open a gap again and then manage it. Then, when I was celebrating I saw a marshal with a No. 26 cap, so I took it and went to celebrate in front of the fans because I think this weekend Dani was the protagonist, and we’ll miss him. We and Honda are working very well and we need to continue like this in the second part of the Championship with the same feeling we’ve had so far.

At lights out it was Jorge Lorenzo (Ducati Team) who got the holeshot from pole, moving from third into the lead as Danilo Petrucci (Alma Pramac Racing) slotted into second – with Marquez shuffled back into third. Rossi made a good start from sixth to move into fourth ahead of teammate Viñales, with Andrea Dovizioso (Ducati Team) the key man to lose out from fifth.

Once at the front, Lorenzo set about putting the hammer down, making it the sixth race in succession the Mallorcan has led. It didn’t take too long for Marquez to make his way through to be the man behind his compatriot, however, and a game of cat and mouse began at the front as Marquez reeled in the rhythm ahead of him.

Meanwhile Rossi attacked Petrucci for third and moved through, as Cal Crutchlow (LCR Honda Castrol) then crashed out at Turn 12, the Brit’s say in the podium fight over early. Lorenzo was holding firm at the front, but Marquez then chose his moment and struck – taking over in the lead and leaving Lorenzo to be reeled in by Rossi.

That the Italian did, and the rider from Tavullia got his own hammer down once past to try and claw back some time to Marquez, but it wasn’t to be. The number 93 pulled the pin with perfect timing, with enough grip left to see him make a gap and keep it until crossing the line for stunning ninth win in a row at the Sachsenring – and all from pole.

Rossi was then safe in second for another podium finish, but teammate Viñales left it late to complete the rostrum. First Petrucci was the man pushing to pass a Lorenzo struggling with grip, before Viñales arrived on the scene and attacked the Mallorcan and then the Italian to take third and a second successive podium.

That made Petrucci top Independent Team rider in a well-fought fourth, just ahead of Alvaro Bautista (Angel Nieto Team)’s stunning ride to fifth. Bautista was the fastest man on track for a good number of laps and kept that incredible form to the end, the final man able to muscle past Lorenzo by the flag.

Lorenzo took P6 ahead of a tough day for teammate Andrea Dovizioso, with Dani Pedrosa (Repsol Honda Team) putting in a solid ride to eighth. Johann Zarco (Monster Yamaha Tech 3) improved from his worst qualifying of the season so far to take ninth despite the difficult weekend, with an incredible ride from Bradley Smith (Red Bull KTM Factory Racing) putting the Brit in tenth to take KTM’s first top ten of the season.

Hafizh Syahrin (Monster Yamaha Tech 3) was top rookie in eleventh and takes over at the top of the Rookie of the Year standings, ahead of Andrea Iannone (Team Suzuki Ecstar), who was caught in an early incident that saw Pol Espargaro (Red Bull KTM Factory Racing) make contact with Alex Rins (Team Suzuki Ecstar) and both go down; also affecting Iannone and Jack Miller (Alma Pramac Racing). Miller finished P14, with Tito Rabat (Reale Avintia Racing) between him and Iannone. Scott Redding (Aprilia Racing Team Gresini) completed the points.