MotoGP: Marquez on pole as only 0.376 seconds split the top 10 riders in Assen 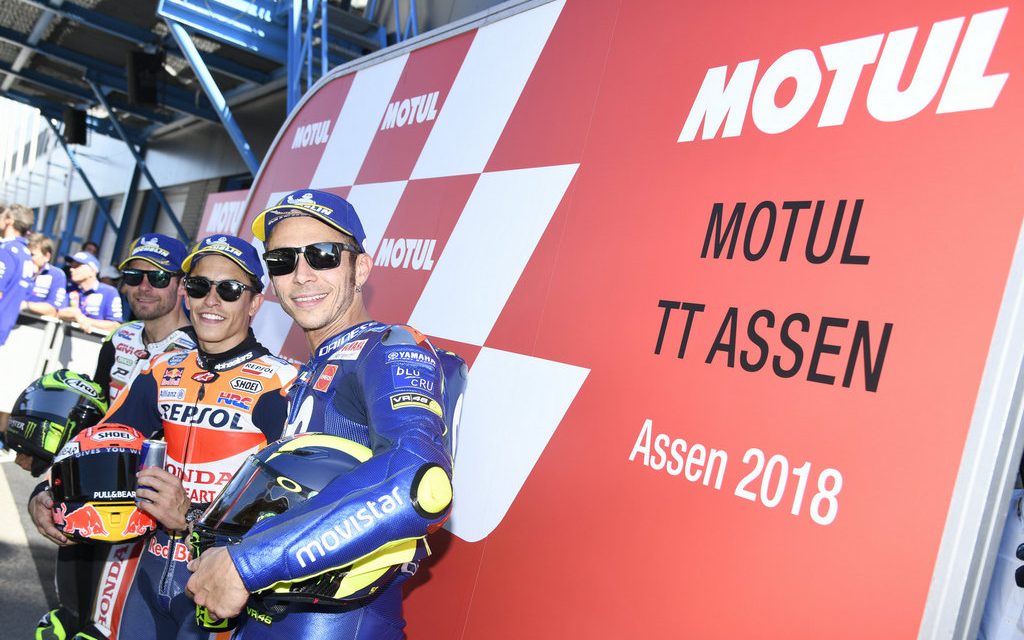 It’s reigning Champion Marc Marquez (Repsol Honda Team) who will be starting from pole at the Motul TT Assen – his first at the venue in the premier class, only second of the 2018 season and 75th overall – but the pack were incredibly close together after qualifying at the ‘Cathedral’ delivered an absolute classic. The top ten are within 0.376 seconds and the biggest gap between any two riders is just 0.063, setting the scene for a stunning race day once again. Cal Crutchlow (LCR Honda Castrol) who starts second and as top Independent Team rider, with 10-time winner at the venue Valentino Rossi (Movistar Yamaha MotoGP) completing the front row.

The mad dash for pole was true to its name as the final 30 seconds saw everything shuffle and shuffle again, with Jorge Lorenzo (Ducati Team) and Andrea Iannone (Team Suzuki Ecstar) initially seeming to have the advantage before that final lap for the majority of those in the session – and the emergence of Marquez at the top. But it’s just 0.041 back to Crutchlow and 0.059 back to Rossi, with Andrea Dovizioso (Ducati Team) heading the second row despite only being 0.079 off pole.

The Italian is joined on Row 2 by the first of the Q1 graduates as Alex Rins (Team Suzuki Ecstar) impressed on his first run and his second to secure P5 as top Hamamatsu factory machine. Friday’s fastest Maverick Viñales (Movistar Yamaha MotoGP) starts sixth and still within two tenths of pole, with the Spaniard hoping for a better launch off the line than in Barcelona.
Aleix Espargaro (Aprilia Racing Team Gresini) continued his solid weekend as he converted automatic entry to Q2 into seventh on the grid – as well as making it five manufacturers in the top seven. Johann Zarco (Monster Yamaha Tech 3), who topped Q1 after a stunning final dash, starts from the middle of the third row – just getting the better of Iannone, who lost out in the last few seconds.

That was also true of Italian and Catalan GP winner Jorge Lorenzo, who starts tenth after having been the early pacesetter. Less than four tenths off, the ‘Spartan’ will be looking for a lot more on Sunday and keen to make another lightning launch off the line.

Danilo Petrucci (Alma Pramac Racing) and Alvaro Bautista (Angel Nieto Team) took P11 and P12, with Takaaki Nakagami (LCR Honda Idemitsu) taking top rookie honours in P13. Both he and fellow debutant Haifzh Syahrin (Monster Yamaha Tech 3), who starts fifteenth, will be looking to gain some ground in the fight for Rookie of the Year – with current leader Franco Morbidelli (EG 0,0 Marc VDS) missing the race and declared unfit after suffering a small fracture in his left hand.

Jack Miller (Alma Pramac Racing) and Dani Pedrosa (Repsol Honda Team) will be two men keen to blast past that rookie battle as early as possible in the race – starting P16 and P18 respectively after a tough weekend for both so far.

That’s a wrap on Saturday for the premier class – can Marquez extend his lead from pole? Can Rossi repeat the feat from third? Or can a darker horse a little future back get into that incredible fight, and take it down to the wire at the awesome Geert Timmer chicane…

I am not saying FERRARI are sandbagging. I'm saying that binotto's been seen at the beach with a shovel