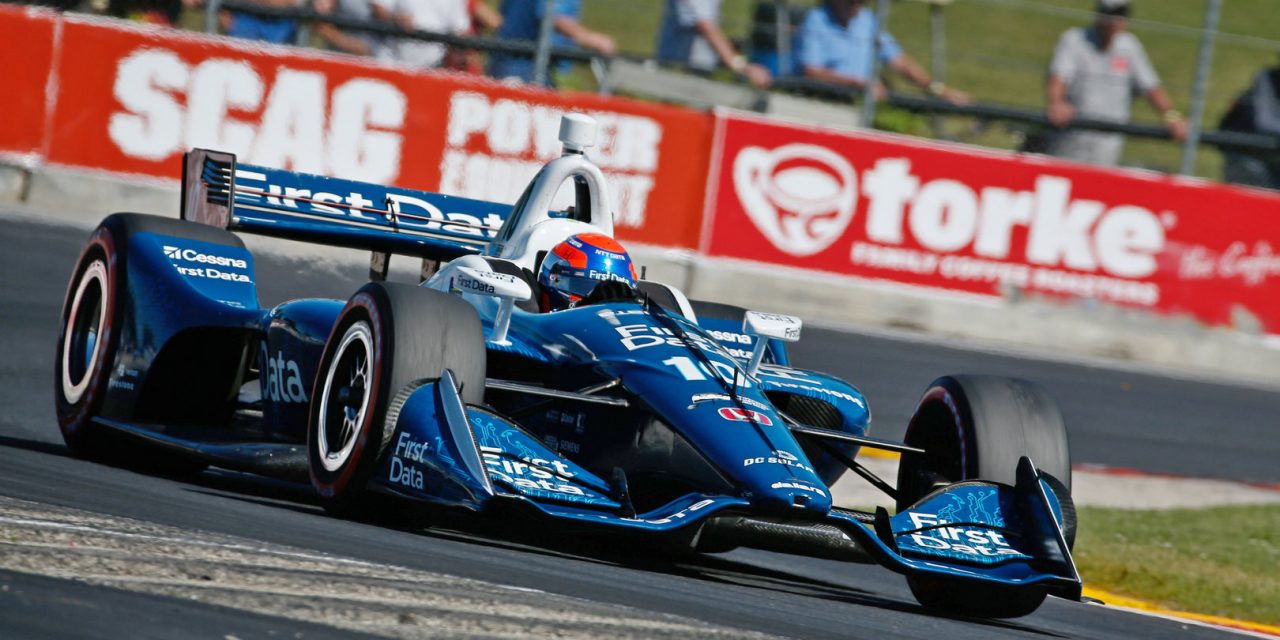 Ed Jones claimed the sixth top ten finish of his sophomore Verizon IndyCar Series campaign – and fourth in swift succession – at Road America last weekend (23/24 June), but the Chip Ganassi Racing star was made to work hard for it after an opening lap delay dropped him down the order and set the stage for an eye-catching recovery effort.

Universally popular amongst drivers, Road America is a 4.014-mile, 14-turn permanent road course in Elkhart Lake, Wisconsin, boasting a long and illustrious history and posing a stern challenge to competitors. Having clinched pole position there two years ago on his way up the ladder in Indy Lights and wound up seventh last season as an IndyCar rookie, Jones returned with a strong record and a new partnership with global commerce-enabling technology leader First Data.

After initially struggling for speed behind the wheel of his 720bhp Dallara-Honda single-seater, the talented young Dubai, UAE-born ace and his crew focussed specifically on aero balance, and consistent progression saw Jones gain more than a second in lap time between the first free practice session and qualifying.

That secured the 2016 Indy Lights Champion and 2017 IndyCar ‘Rookie of the Year’ 12th on the grid amongst the 23 high-calibre contenders, less than two tenths-of-a-second shy of Ganassi team-mate Scott Dixon – the defending race-winner, current championship leader and a man with no fewer than four titles to his credit at the fiercely-disputed pinnacle of US open-wheel competition.

“Road America is one of my favourite tracks on the IndyCar schedule,” acknowledged Jones. “The team was refreshed and ready to attack following a weekend off, and the guys on the First Data car worked hard and made some great changes after we were missing something in practice. I was a lot more confident in qualifying and felt we were going in the right direction. Indeed, without getting held up, I think we would have been capable of advancing into the ‘Firestone Fast Six’.”

The 23-year-old Brit duly entered the following day’s 55-lap KOHLER Grand Prix in optimistic mood. After falling to 17th at the start when Will Power suddenly and unexpectedly slowed – inadvertently boxing the No.10 car in – he immediately set about fighting back and within five laps had impressively regained all of the lost ground. Making the most of a three-stop strategy, Jones rose as high as seventh and featured up towards the sharp end throughout, ultimately flashing past the chequered flag in ninth position.

That marked the former European F3 Open Champion’s 11th career top ten finish from 27 races, consolidating 12th spot in the overall standings ahead of the next outing on the 2018 calendar – a return to oval competition – at Iowa Speedway on 8 July.

“It was a tough start to the race,” reflected Jones, who is being coached this year by multiple IndyCar Champion and Indianapolis 500 winner Dario Franchitti. “We kind of got sandwiched in when one of the cars ahead had an engine issue, which meant my side of the grid got stacked up and I had nowhere to go.

“That dropped us down the order and cost us a ton of track position which was hard to get back, but the First Data car was really fast and we were able to pass a lot of people over the remaining laps. The team did a good job in the pits, and we’ll keep fighting and moving forward. It’s been a great last few races for Ganassi, and that shows we have the speed we need to win and compete at the front.”