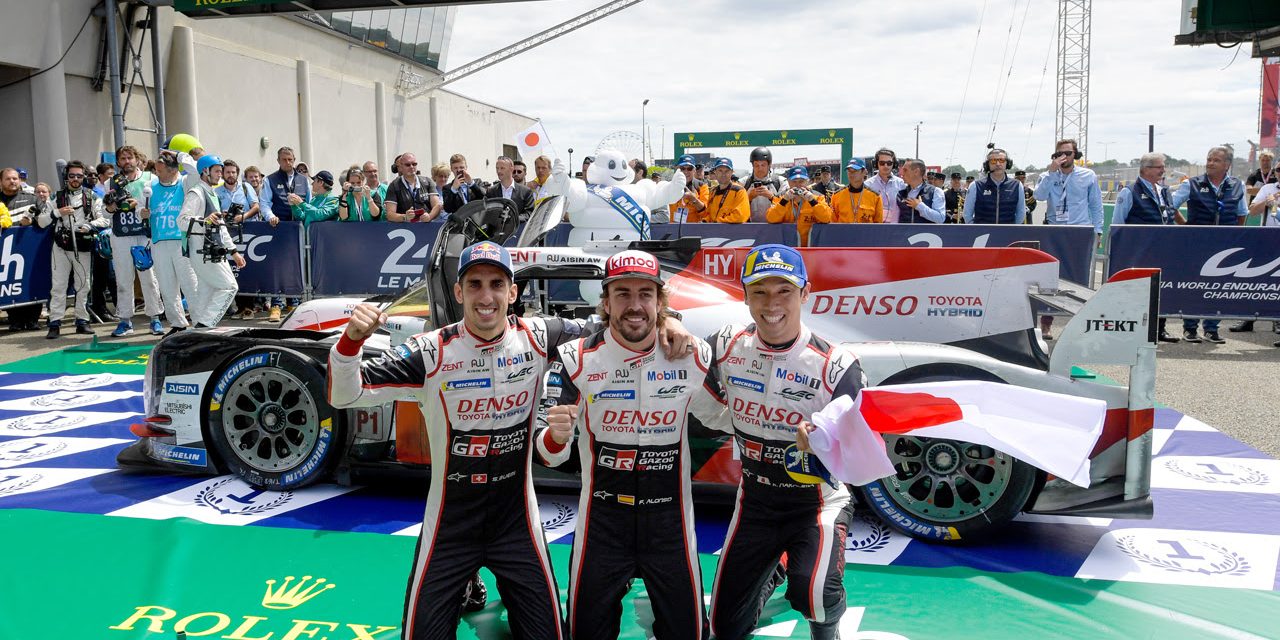 The 86th edition of the 24 Hours of Le Mans has crowned a new winner: Toyota! Before a 256,900-strong crowd, the Japanese manufacturer has triumphed at Le Mans for the very first time, achieving a goal it has been chasing since 1985. Fernando Alonso wins Le Mans at his first attempt, while Buemi and Nakajima are rewarded for their perseverance.

At 15:00 on Saturday 16 June, tennis champion Rafael Nadal, starter of the 86th edition of the 24 Hours of Le Mans, gave the start of a historic 24-hour battle won by a particularly combative, tenacious warrior.  The Japanese manufacturer first started chasing victory at Le Mans in 1985. At 15:00 on Sunday 17 June the team finally achieved a dream. Finally, Le Mans has chosen Toyota. The endurance classic has also elected two-time Formula One world champion Fernando Alonso as one of the chosen few to win at the first attempt. The Spaniard shares his triumph with Sébastien Buemi and Kazuki Nakajima who have suffered several disappointments with the Japanese team.

A rookie at Le Mans, Fernando Alonso seems bowled over by the race: “It’s a shame the 24 Hours of Le Mans only happens once a year. They should hold it every 2 or 3 weeks.”

In the hotly disputed LM GTE Pro class, Porsche pops the champagne to celebrate its 70th anniversary in style with a win for the Pink Pig Porsche 911 RSR. The German marque continued the festivities with a triumph in LM GTE Am for Patrick Dempsey’s team Dempsey Proton Racing. No doubt the actor and team owner’s proudest sporting moment.

“It’s amazing, I’m still a little bit in shock right now. It was very stressful at the end when we were all watching. It’s been a very tense 24 hours. Maybe tomorrow, we’ll start to realise! I felt ok in the traffic. Sometimes you’re lucky for a few laps and then sometimes you’re unlucky and you get in a bad loop but the race suited my driving style and it all worked out.”

Sébastien Buemi – #8 Toyota TS050 Hybrid, winner: “This is definitely the biggest win in my career. I was watching Kazuki for the last few laps and couldn’t forget 2016. I’m still struggling to realise. Finally winning is just huge! When I incurred the penalty, I thought it was going to be difficult from then on. There was a gap of more than two minutes when I handed the car over to Fernando, but just 40 seconds when he’d finished. The balance of the car changes throughout the race and the two cars were very similar so congratulations to car #7 too.”

Kazuki Nakajima – #8 Toyota TS050 Hybrid, winner (tasked with the huge responsibility of the final stint): “It’s just amazing. I’m speechless. Toyota gave us a very strong car. We all deserved to win but our car had a bit more luck perhaps, so I’m happy to be up here representing everybody.”

José María López – #7 Toyota TS050 Hybrid, second: “I have to congratulate everyone, not just the six drivers but the whole team and the people at home. I was a lot slower than Fernando in the night. I had it tough as I always had to race against him but we found a good rhythm and Fernando was very fast. In a 24-hour race, if you’re a tenth quicker, it makes a big difference.”

Mathias Beche – #3 Rebellion R13 of Rebellion Racing, third: “I’m proud of what the team did, proud of my teammates. We were the underdogs and I’m proud of that position. We did the job on track, did a solid race and I’m happy for the whole team. The whole project was great. Everyone worked flat out to be ready.”

Thomas Laurent – #3 Rebellion R13 of Rebellion Racing, third (on the podium last year as well): “We concentrated on bringing the car home in one piece. Compared to others, we had a few issues and were in the garage a lot.”

Pierre Fillon, President of the Automobile Club de l’Ouest: “This 86th edition of the 24 Hours of Le Mans lived up to all its expectations. The result could only be historic, and it is. Toyota has won Le Mans for the first time ever. Toyota proved it has the stamina to last the course. As do Fernando Alonso, Sébastien Buemi and Kazuki Nakajima. My sincere congratulations to all three. Porsche celebrates its 70th anniversary in style, with victory for both the Pink Pig and Dempsey Proton Racing. LM P2 victory goes to the G-Drive Racing Oreca 07 and Rusinov/Vergne/Pizzitola. Congratulations to all competitors who gave their utmost in a tough race. See you back here on 15-16 June 2019 for the 87th edition of the 24 Hours of Le Mans and the culmination of the FIA Championship.”