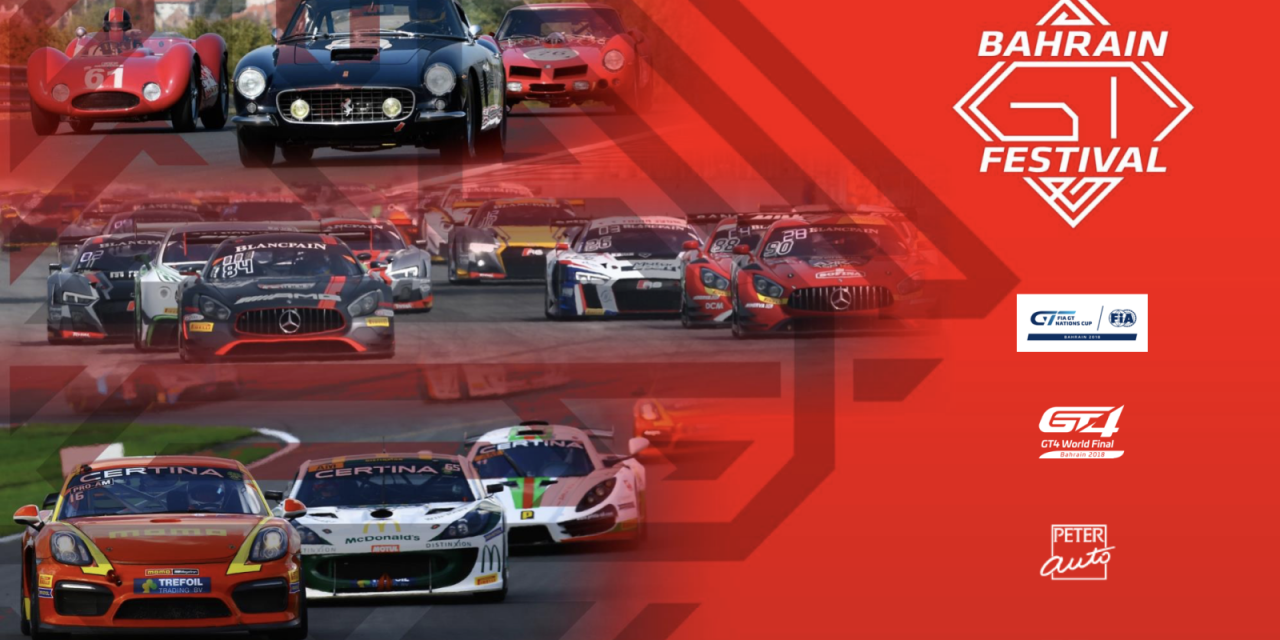 SRO Motorsports Group and Bahrain International Circuit are delighted to announce the launch of the Bahrain GT Festival, which will take place at the Home of Motorsport in the Middle East on 30 November and 1 December 2018.

Featuring a variety of high-octane categories, this exciting two-day event will include the new FIA GT Nations Cup, the SRO GT4 World Final, and Porsche GT3 Challenge Middle East. Each category will contest multiple races, with some competing under the lights on Friday evening. With the promise of further on-track entertainment from Patrick Peter’s Classic Endurance Racing Series, the Bahrain GT Festival will be a true celebration of international motorsport in the region.

The FIA GT Nations Cup will provide the headline act, with drivers from across the globe descending on the Bahrain International Circuit to fight for national glory. Each two-man crew will comprise one Silver and one Bronze driver representing their home nation, with a maximum of one car entered per country. Cars can be entered by any team, regardless of nationality, with teams allowed to enter cars for multiple nations.

Two qualifying sessions will set the grid for a pair of 60-minute qualifying races – the first on Friday, the second on Saturday– which in turn decide how drivers will line up for a 60-minute main race on Saturday afternoon. When the chequered flag falls, the winning drivers and their country will be crowned as champions.

As well as the FIA GT Nations Cup, the Bahrain GT Festival will deliver a packed weekend of on-track action thanks to a number of significant support events, including the inaugural SRO GT4 World Final.

Devised by SRO Motorsports Group, the GT4 concept has gone from strength to strength in recent years. Making use of machinery from 12 globally relevant brands, this international contest will feature the category’s best competitors from all four corners of the globe.

The GT4 World Final will be open to line-ups competing for Pro-Am (Gold-Bronze), Silver Cup (Silver-Silver) and Am (Bronze-Bronze) honours at the Bahrain International Circuit, with the format of two 60-minute qualifying races followed by a main 60-minute event mirroring that used by the FIA GT Nations Cup.

Entry is open to competitors from the 12 series either directly promoted by SRO or organised through franchise agreements around the world. The cost of sea freight to the event will be met by the promoter, ensuring a truly global mix of teams and drivers.

The Porsche GT3 Challenge Middle East will add local flavour to the Festival. Using the Stuttgart marque’s newest GT3 Cup car and based at the Bahrain International Circuit, the one-make series features drivers from the region and further afield competing in highly competitive sprint races.

Forming part of the series’ 2018-2019 schedule, the Festival will give drivers a golden opportunity to compete in front of the world’s most accomplished GT racing professionals.

While much of the focus will be on contemporary GT equipment, fans will also be given an opportunity to take a step back in time at the Bahrain GT Festival thanks to Patrick Peter’s Classic Endurance Racing Series.

This popular category features packed starting grids and combines iconic machines such as the Ford GT40, Porsche 910, and Ferrari 512. Usually found at Europe’s premier venues, the Classic Endurance Racing Series will make the journey to Bahrain to add a historic flavour to the GT Festival.

With national pride at stake in the FIA GT Nations Cup and an all-star supporting cast, a landmark weekend of international motorsport is in store later this year at the Bahrain International Circuit.