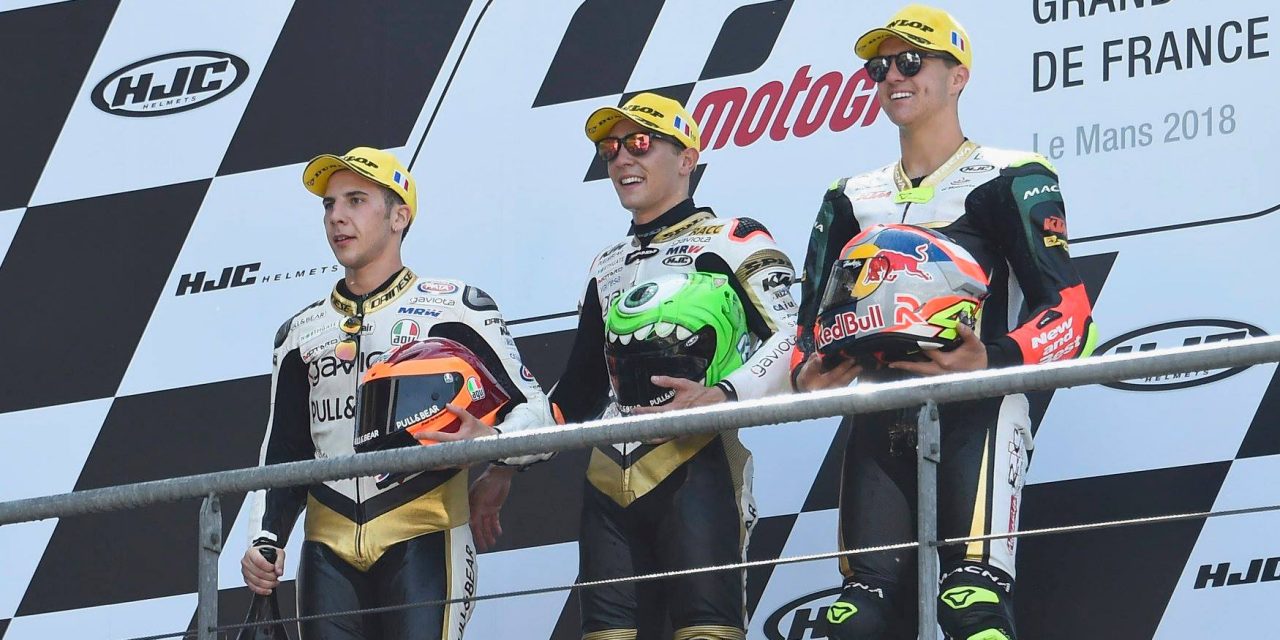 A maiden win for the Spaniard, with Bezzecchi and Martin crashing on the final lap

Albert Arenas (Angel Nieto Team Moto3) claimed his first lightweight class win at the HJC Helmets Grand Prix de France in what was nothing short of a spectacular Moto3™ race. Teammate Andrea Migno claimed second to make it a perfect day for the Angel Nieto Team, with Marcos Ramirez (Bester Capital Dubai) standing on the third step of the podium for the second race in a row.

That was just the start, with all the drama coming in the final laps of the race. One of the biggest headlines was Championship leaders Marco Bezzecchi (Redox PrustelGP) and Jorge Martin (Del Conca Gresini Moto3) – the two leaders for most of the race – crashing with just one corner to go. Bezzecchi, after being passed by Fabio Di Giannanotonio (Del Conca Gresini Moto3), highsided trying to cut back through on his compatriot. Martin, right behind Bezzecchi in third, had nowhere to go – the Spaniard crashed out of a podium position.

The drama didn’t stop there. Di Giannantonio went on take the checkered flag, with the Italian elated to have claimed what he thought was his first ever Moto3™ race win. However, a three second time penalty for running over the chicane at Turns 10 and 11 midway through the race was added to his time – meaning Arenas took the race win.

Niccolo Antonelli (SIC58 Squadra Corse) was another who fell foul of the same rule, penalised for running straight over the first chicane. So although the Italian crossed the line third, a time penalty promoted Marcos Ramirez (Bester Capital Dubai) to make it the second consecutive race the Spaniard stands on the podium. Di Giannantonio was classified fourth, leaving him second in the World Championship, and Antonelli was classified fifth.

Another huge headline moment saw Jakub Kornfeil (Redox PrustelGP), battling for the lead throughout, showing off some outrageous motocross skills when he unavoidably hit Enea Bastianini’s Leopard Racing bike after the Italian fell on the final corner with a lap to go. The Czech rider was launched into the air, but spectacularly managed to land upright in the gravel – and cross the line sixth.

Tony Arbolino (Marinelli Snipers Team) had a strong showing in P7, with Aron Canet (Estrella Galicia 0,0) brilliantly carving his way from the back of the grid to finish in the top ten. The Spaniard will leave Le Mans third in the Championship, ahead of Martin and only seven points off Bezzecchi the leader.