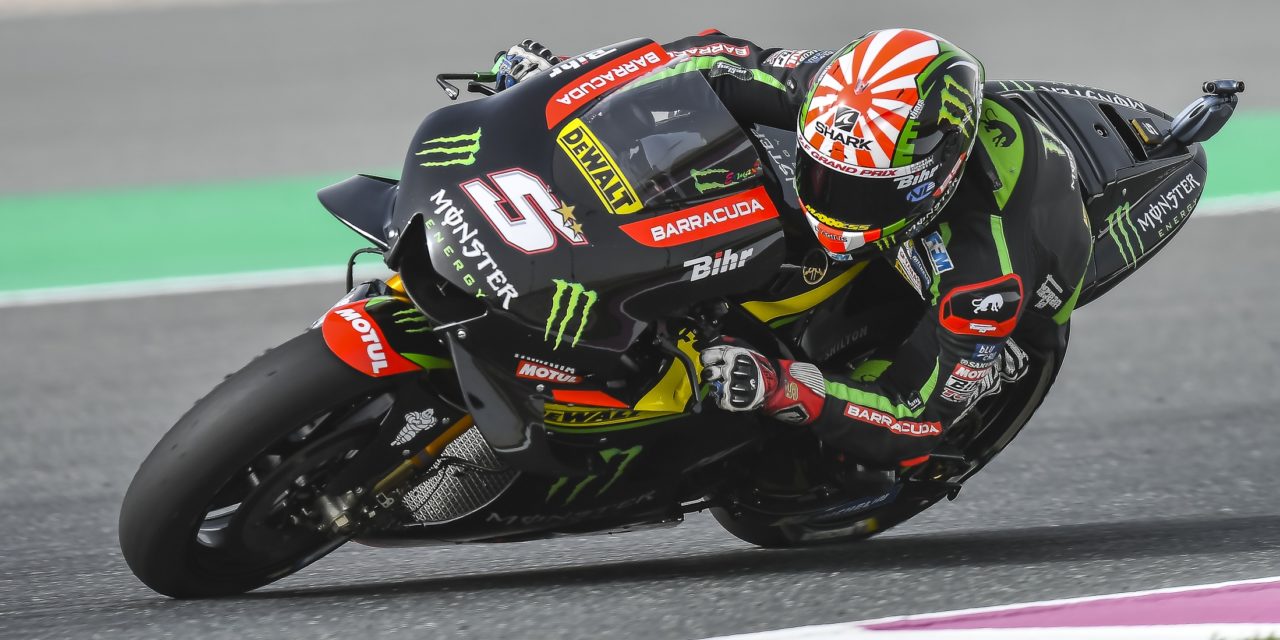 A lot has changed in the ten years since Jorge Lorenzo set the world alight on his premier class debut, but the Qatar pole lap record hadn’t. Set by the Majorcan in 2008, the Losail laptime remained steadfast in the record books for a decade and was the oldest of its kind until Saturday of the 2018 Qatar GP and a scorcher from Johann Zarco (Monster Yamaha Tech 3). The Frenchman, now heading into his second season, marked his return to the venue at which he first led a premier class race in serious style – uncatchable ahead of Marc Marquez (Repsol Honda Team) to set a 1:53.680. So the reigning Champion starts his title defence from two tenths behind in second, and top Ducati Danilo Petrucci (Alma Pramac Racing) completes the front row and the trio of those who broke the record.

With strong winds throughout the day and the track temperature cooling as night fell for qualifying, the session revealed another piece in the puzzle of the first race of the year. Behind the top three, Cal Crutchlow (LCR Honda Castrol) was next up heading the second row to make it 75% Independent Team riders in the top four, with Andrea Dovizioso (Ducati Team) – the man on provisional pole after the first run – taking the middle of Row 2. But Marquez says the 2017 Championship runner up has the best race pace – something that will be revealed on Sunday.

Alex Rins (Team Suzuki Ecstar), meanwhile, kept his great pace at Losail rolling for his best ever qualifying position to lock out the second row, after Suzuki mounted the biggest challenge to Ducati on Friday.

Dani Pedrosa (Repsol Honda Team) heads up an all-star Row 3 with some serious potential for fireworks, with 17 World Championships crammed into three grid places as the Spaniard heads Movistar Yamaha MotoGP’s Valentino Rossi and Ducati Team’s Jorge Lorenzo. Lorenzo, who suffered some technical trouble in FP4, says he is out of position – and Rossi says the battle at the front could be more than ten riders. And Lorenzo, as well as being the previous pole record holder, is also the most successful rider at Losail across all classes – but Rossi beats him in the premier class with four to Lorenzo’s three wins.

Jack Miller (Alma Pramac Racing) completed the top ten after moving through Q1, with Andrea Iannone (Team Suzuki Ecstar) two tenths back in P11 to make it more than ten riders within a second of pole. Meanwhile,  2017 polesitter and winner Maverick Viñales (Movistar Yamaha MotoGP) lines up in P12 – but also showed incredible consistency on a long run in FP4…

Valentino Rossi expects to fight it out for the #QatarGP with more than ten riders and Losail always serves up a desert storm. Don’t miss the 2018 season opener, with the lights going out at 19:00 local time (GMT +3) as the battle well and truly commences.

Johan Zarco – “I’m really happy, it’s truly the best way to start the season. I had a crash in FP4. I came away with no harm, but it’s not funny to be down before the qualifying. Anyway, I knew that with new tyre and light bike, I feel good and since this morning, I got back my feeling, that I had during the test here. Beating the lap record makes me really proud. Tomorrow is the main day. I want to try to win, try to be on the podium. It looks like my pace over the distance is not the best one, but at least starting from pole is the best chance to catch a good result.”

Marc Marquez – I’m really happy with the result as we’ve worked a lot during the pre-season and we worked a lot here, a track that, together with Sepang, is probably the least favourable circuit to me. Today was the first real “time attack” and we were there, and now we are on the front row. Adding to the satisfaction is the fact that normally we struggle quite a lot here. But our target was the front row, we got it and it feels like a pole! Johann rode amazingly; he was one step ahead of us. Anyway, the race will be tough and long, but we’ll try to be consistent and to manage the laps in the best way possible.

Dani Pedrosa– We’re of course not 100 percent satisfied with the result but we’re not unhappy either. Conditions were not what we were expecting and this is not the perfect track for me. Even more, qualifying is generally tough here. The positive thing is that we were able to improve the bike’s setup a little during FP4. Now we have to see what the conditions will be like tomorrow because they change every day at this track, and even session by session, because of the wind and the sand. I think the tyre choice will be the key to the race, as well as the start of course. Seventh place in qualifying means that we have to start well, battle well in the lead group, and find our rhythm.

Great awareness by Dovi. Had he not sat up, they would have crashed.