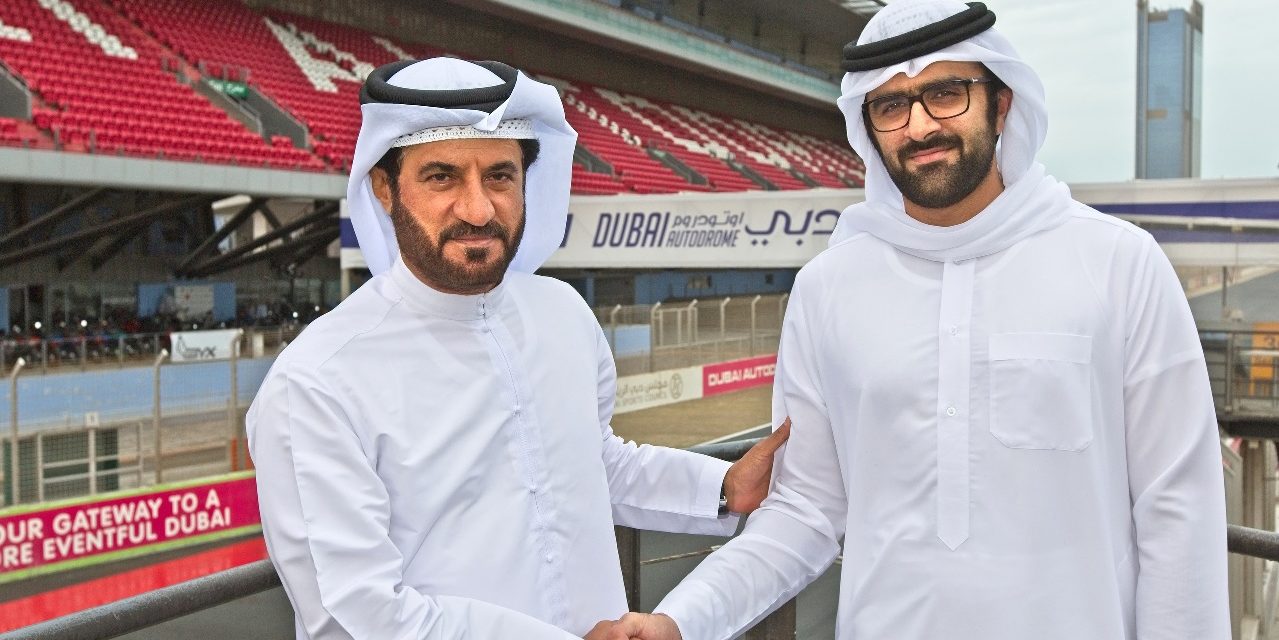 Dubai, UAE, 26 February, 2018: The Dubai International Baja powered by AW Rostamani and Nissan has a new home, and the announcement today that Dubai Autodrome will be the beating heart of the event next month provides another boost for the double World Cup rally.

Mohammed Ben Sulayem, President of the Automobile and Touring Club for the UAE and Emirates Motor Sport Federation, has signed a partnership agreement with Faisal Al Sahlawi, General Manager of Dubai Autodrome, establishing the venue as the official Rally H

Running from 8-10 March, the Dubai International Baja powered by AW Rostamani and Nissan is the second round of this year’s FIA World Cup for Cross Country Rallies for cars and buggies and the opening round of the FIM Bajas World Cup for bikes and quads

“This is an important development because the world-class motor sport infrastructure and facilities at Dubai Autodrome will take the event to a new level,” said Ben Sulayem, the FIA Vice President for sport.

Al Sahlawi commented: “We’re delighted to be playing host to the event and look forward to welcoming the drivers and riders assembling in Dubai from across the region and overseas.

“This new agreement builds on our close working relationship with the ATCUAE which is dedicated to providing a top-class stage for a growing calendar of motor sport activities.”

Taking place under the patronage of H.H. Sheikh Hamdan bin Mohammed bin Rashid Al Maktoum, the Crown Prince of Dubai, the rally is supported by the Government of Dubai, Dubai Police, Dubai Municipality and the General Authority of Sports.

The second edition of the event sends a powerful line-up of cars, buggies, bikes and quads into action over a demanding 174 km special stage running through the dramatic Al Qudra desert terrain on Friday, March 9, and Saturday, March 10.

And just as the competitive sections of the event will be as spectacular as anything seen in this year’s World Cup series, the arrival of Dubai Autodrome as the Rally HQ means no other round will match the facilities available for competitors, teams, officials and media.

They assemble at the new World Cup venue on 7 March for administrative checks and official scrutineering over two days to determine the final line-up for the ceremonial start at 5pm on 8 March.

Dubai Autodrome will also host the media centre, a pre-event press conference and reception, the competitors’ briefing, as well as the official finish and prize giving on 10 March.

With the support of the ATCUAE, Dubai Autodrome now stages the annual Emirates Motorsport Expo which brings together all forms of UAE motor sport, from circuit racing to cross country rallying for cars and bikes.  The event gives those interested in becoming actively involved in motor sport opportunities to meet teams, competitors and key stakeholders.

By the end of March, Dubai Autodrome will complete Phase I of its new Motorsport Business Park. Developed by Union Properties and Multilink Contracting, the 6,000 square metre facility, located in the centre of the 5.39 kilometre race circuit, will bring together all of the major UAE motorsport businesses and racing teams. The first phase was fully booked as soon as it was announced, so an additional building, Phase II, is now being planned.

One Grand Prix victory, but enough memories to last a lifetime! 🏆

Watch ten classic races for FREE which saw riders stand on top of the podium for the only time in their careers! 🥇 ... See Less

I won’t lie..... I was in bits watching this race live on TV I love Damon

Good for them hard work does pay off🏁🏁🏁🏁🏁