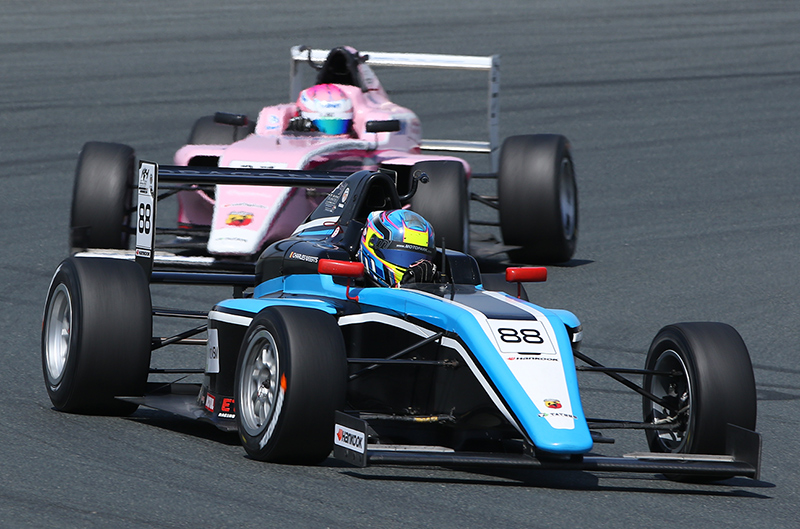 Scattered patches of rain made it difficult for anything on wheels but, despite minor delays, all fourteen races over six races series were completed.

Going into the final round of the championship Charles Weerts of Dragon Motopark F4 was clinging on to a slender 13-point lead over Motorsports/US Racing’s David Schumacher with 100 points up for grabs.

Instead of panicking under pressure the Belgian delivered a masterclass performance of methodical and determined driving.  Weerts got the jump on Schumacher in qualifying by just 0.157 seconds, and then went on to take four race wins in a row.

With nothing to lose the German driver pushed the limits trying to catch Weerts, but several mistakes cost Schumacher valuable time and the title. James Bartholomew and Jack Pull are both quite at home on the 5.39-kilometre Grand Prix Circuit at Dubai Autodrome.  On its last outing in Dubai, the #5 FFF Racing Team Lamborghini Huracán bagged two wins, the first victories for the drivers in the Super Trofeo.

Bartholomew and Pull struggled in qualifying but, when it mattered most, had plenty of race pace to get the job done.  The FFF Racing Team duo went two-for-two in a pair of races, each time being chased by AM driver Taylor Proto, who had to settle for second-place both times.

As consolation Proto wrapped up the AM Championship, topping the category over Andrzej Lewandowski.  The PRO AM class was split with Glauco Solieri and Daniel Zampieri of Antonelli Motorsport topping Race One and Carrie Schreiner and Axcil Jeffries of Konrad Motorsport taking Race Two. Rain delayed the Ducati bikers but didn’t stop them, and the series managed to get both races finished on the 2.46-kilometre Club Circuit on Friday.

British rider Wesley Pearce was in good shape early on, topping qualifying screens with a best lap time of 1:06.294, almost half a second clear of Saska Totaro of Italy.  Saudi rider Ahmed Al Muyini was close behind to claim P3.

Race One developed into a compact battle that witnessed several lead changes in the final laps.   Al Muyini edged out Dijon Compton in the last lap to take the chequered flag by just 0.052 over the Brit.

For Race Two again it was Al Muyini and Compton challenging for the front, but this time Compton kept the lead and held on for the win, crossing the finish line almost two full seconds ahead of the Saudi. Hot off victories from the previous round, Jim Geddie of Dragon Racing continued his winning ways with a flawless performance over the weekend.  Geddie racked up a motorsport hat-trick in his Ferrari 458 GT3, taking qualifying by storm and then two race triumphs in a row, wrapping up another Class Three sweep.

Geddie’s Ferrari was a full 1.894 seconds a lap faster in qualifying than the Audi R8 LMS Ultra of Petr Kacirek driving for K& K Duck Racing.  Kacirek’s Audi kept in pursuit in Race One, but ultimately the Dragon Racing Ferrari was too quick to catch and Geddie cruised in for victory, leaving Kacirek 12.747 seconds behind.

The Audi R8 LMS was out of action for Race Two, which left Geddie free to stroll in for another win, with another Dragon Racing Ferrari, driven by John Sawbridge and Zaamin Jaffer to claim second-place.

Ferrari 458 Challenges dominated Class Four, with Tani Hanna of Dragon Racing nabbing the class win in the first race, and Sawbridge and Jaffer taking the second. Class Two featured fierce competition, but the Honda Integra of Johnathan Mullan and Umair Khan emerged victorious from the pack in both races.  Will Morrison was runner-up each time but as consolation Morrison brought home trophies for two Clio Cup wins. Kuwaiti rider Fahad Al Gharbally of MSK Racing held on for a pair of wins on the 2.46-kilometre Club Circuit at Dubai Autodrome, improving his standings in the 600cc Championship.

Defending 600cc champion Mahmoud Tannir, riding a Honda CBR600RR, set the pace to start the day, taking pole position with a best lap time of 1:07.254, over half a second quicker than Fahad Al Gharbally on his MV Augusta F3.

Fortunes changed in the first race; Tannir was forced to retire his Honda which opened the door for his rivals, Al Gharbally and Nasser Al Shaiba.  Al Gharbally crossed the finish line 8.440 seconds ahead of Al Shaiba to win Race One.

Tannir was back in it for Race Two but it didn’t matter; Al Gharbally powered to another victory, crossing the finish line 9.869 seconds ahead of the Lebanese rider. Finnish drivers Jani Hjerpe and Seppo Mantyla of Dream Racing rose to the top of the first qualifying session with a best lap time of 2:07.064, beating out Ollie Smith of AUH Motorsports by an impressive 2.607 seconds.

The Dream Racing duo didn’t waste the pole position; they stayed in front of Smith and cruised to victory by a comfortable 37.779 seconds ahead of the field.

Hjerpe and Mantyla kept the momentum going into Race Two, but this time it was another Dream Racing Radical, piloted by Tarek Elgammal and Mark Stoleson, who chased the flying Finns.

The American and Aussie managed to wrestle pole position away from the Finns in the second qualifying session, but the following race was much same as the first, with Hjerpe and Mantyla taking the chequered flag and going two-for-two on the weekend.