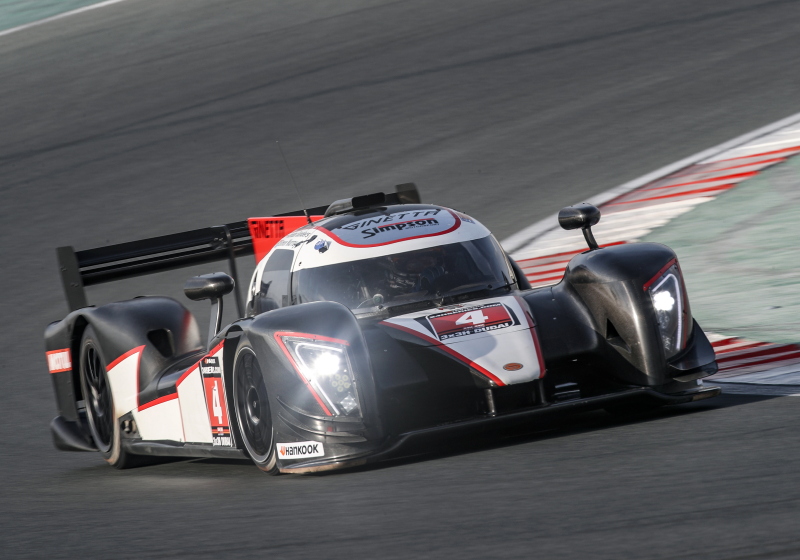 Having taken pole position earlier that afternoon, the Simpson Motorsport Ginetta would make a slow start to the race – losing it lead in the process – and time on-track after its first pit stop, allowing the Graff Ligier to hit the front. A late charge though meant it was Jordan Sanders rather than Michal Broniszewski who crossed the line first after 82 laps of the 5.39km Dubai Autodrome. Graff would at least walk away with P3 class victory.

Early contenders for victory also included the Speedworks Motorsport Ligier JS P3 (#22, Jack Butel / Kay van Berlo / Konstantin Gugkaev) only for engine woes to scupper its process. The British-based Ligier was running comfortably at the front before a broken driveshaft brought it’s run to a screeching halt. Simpson Motorsport would suffer a similar setback with its second Ginetta entry (#4, Steve Tandy / Simon Murray), which was officially retired shortly before qualifying with a broken chassis.

The SPIRIT OF RACE Ligier JS P3 (#48, Piergiuseppe Perazzini / Kriton Lendoudis / Marco Cioci / Rui Aguas) would finish 2nd in the P3 class and 5th overall, albeit half a dozen laps further back after issues for Greek driver Lendoudis saw the Ligier swap ends several times on-track before drawing to a halt completely for several minutes at half-distance.

Tomorrow’s programme continues with race 2 from 9.00 till 12.00 hrs, followed shortly after on Sunday afternoon by race 3 from 15.00 till 18.00 hrs. Live timing and live streaming of the race in HD quality with commentary by Radiolemans.com will be available on the series’ website. The streaming will also be uploaded on the series’ Youtube channel. Regular updates will be published on Twitter (@24HSeries), Facebook (24H Series) and Instagram (24H Series). Further information can be found at www.24hseries.com.

Honestly would rather they played Mario kart. It’s way more fun than this.

Estaben strategy for yesterday race if anyone doesn't let me pass I will do whatever it takes to gain his position. I will set them spinning ☠️☠️

The most dangerous circuit ...

Gutierrez racing is not for you. Please do something else mate!

This virtual game those not have FÍA giving fines 😂

Honestly wish they would just turn damage back on. Like I get it there’s noobs being brought on that aren’t even drivers but cmon it kinda kills this thing just watching them drive like they’re playing Mario Kart.

Just imagine racing like that in real life. Awesome.

Wow this definitely splits option, better than no racing in mine though.

Let me show you the video of my Yamaha in Italy! youtu.be/Cqqivo8wJ-Q

One thing is for real...he certainly can't grow a beard!