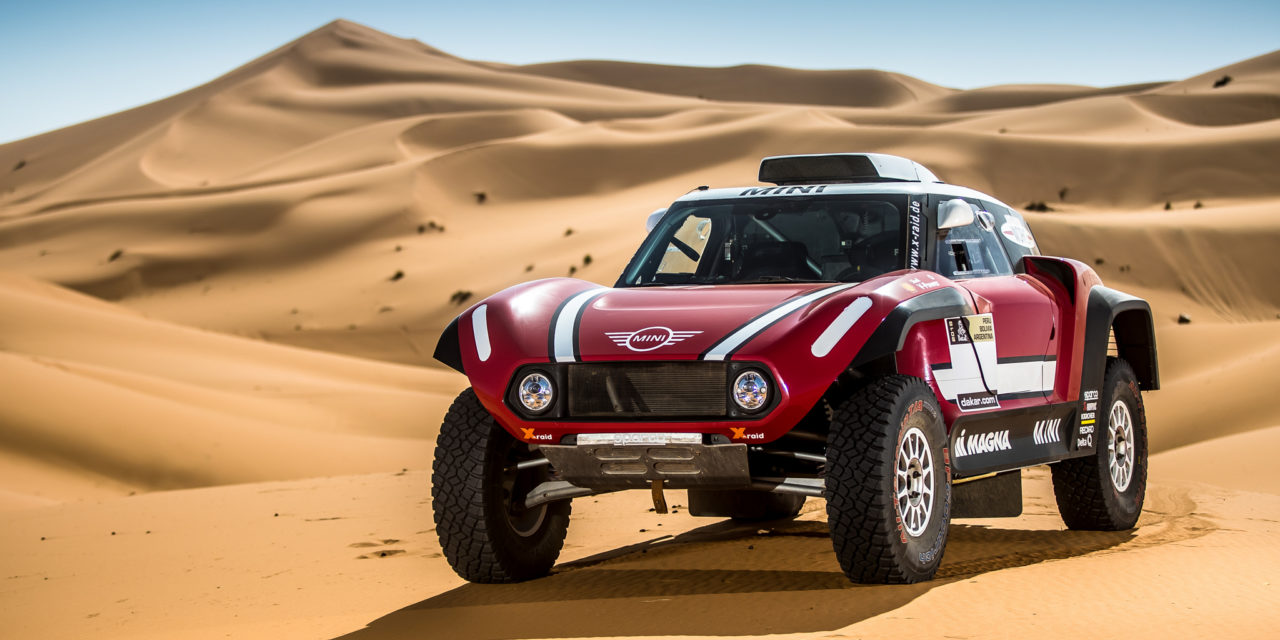 In the 2018 Dakar Rally, X-raid dares to make the first steps into a new era by presenting the MINI John Cooper Works Buggy! In the past 15 years, the Trebur based team fully focused on four-wheel drive vehicles but in the 2018 Dakar that will start in early January at Lima, Peru, it will enter – for the first time – a X-raid designed two-wheel drive desert racer!
“We are absolutely delighted with having the opportunity to present our buggy today, a vehicle our entire team worked really hard on, in the past months,” said X-raid Team Principal Sven Quandt. “This development is unique in the X-raid history as never before so many engineers were involved in the development of an X-raid vehicle.” Although investing a lot of time in the development of the buggy, the MINI John Cooper Works Rally was also improved in many areas and drastically redesigned whilst keeping its proven reliability.
MINI John Cooper Works Buggy
“Due to the regulation advantages, we came up with the idea of building a buggy for quite a while,” Quandt revealed. And in late 2016 the idea began to take shape. The work on the project began February 2017. Altogether, more than 45 engineers of X-raid and numerous partners worked on the new buggy. “The aero package was of major importance and was enhanced together with KLK Motorsport in many simulations,” says Quandt, “And the final looks of the vehicle was created in cooperation with MINI design.”
BMW Steyr designed – within the framework of the regulations – a completely new engine, based on the well-known BMW six-cylinder power unit. And it goes without saying that long-term partners, such as BMW Motorsport, Magna, Heggemann, CP Autosport and Faster, also were involved. “It was the very first buggy designed and built by us but we could hark back to our cross-country experience” engineers involved would not only have resulted in high costs but also would have been virtually impossible, time-wise. So, it was decided to hold Webex conferences. “These conferences dictated our lives for four months,” adds Sven Quandt. ”But they offered us the opportunity to not only discuss small details quickly and in-depth but also take a close look at them and adapt them.”
In early September, the MINI John Cooper Works Buggy covered its first kilometres during the roll-out at the X-raid headquarters in Trebur. And just a few days later it went out for its first off-road test in Hungary. “Prior to this test we were really excited,” reveals Sven Quandt, “But everything went fine and the buggy completed the tests without encountering any major problems.” Consequently, the team could send it to difficult terrain and the buggy was put through its paces for three weeks in Morocco. “Of course we detected several things that could be improved but throughout the three weeks of testing the buggy never was stopped by a technical problem – and that’s really remarkable. The biggest challenge was to manage this project and without losing track of any detail.”
In further tests, the team continued the preparations of the MINI John Cooper Works Buggy for the big challenge represented by the Dakar Rally. “We are well aware of the fact that contesting an event with an all new vehicle can be risky,” admits Sven Quandt. “But we and the buggy are prepared for challenges and strains in South America as well as possible for the time which has been available.” Enhancement of the MINI John Cooper Works Rally
At the same time, the MINI John Cooper Works Rally also was refined in many areas. “Despite all the euphoria you definitely should not forget the 4×4,” underlined Sven Quandt. “There are routes and terrains where the all-wheel drive definitely represents an advantage. Furthermore, our car is extremely reliable and it was the car’s reliability that helped us claiming numerous successes.” Not only the new technical regulation but also the new engine designed for the MINI John Cooper Works Buggy allowed for a significant improvement of the four-wheel drive MINI John Cooper Works Rally. The main improvements resulting from the new regulations are the increased spring travel (from 250 to 280mm) and the reduction of the total minimum weight from 1952 to 1850kg.
“We succeeded in achieving the new minimum weight,” added Sven Quandt. “We attended to absolutely every component.” So, the thickness of the carbon-fibre body and the weight of the frame were reduced. „We also checked all the screws what helped us to save another three to four kilograms. This demonstrates that reducing the car’s weight really was an in-depth effort.”
“It’s our goal to make it to the podium,” concluded Sven Quandt. “No matter if with the MINI John Cooper Works Buggy or the MINI John Cooper Works Rally. There are many variables we can’t control, such as the routing, the weather and – of course – a dose of luck. Something you definitely also need if you want to succeed in the Dakar.”
Miko Hirvonen, driver John Cooper Works Buggy-
How does it feel to drive the new MINI John Cooper Works Buggy?
“Getting behind the wheel of an all new car always is exciting. We covered a lot of kilometres with it and driving it feels extremely good. What impressed me the most was its handling on bumpy terrain. The buggy is a lightweight vehicle and features a bigger spring travel than any car I have driven to date. Therefore, it has got what it takes to also cope with these sections without problems. And it also is physically less demanding. Of course there still are lot of things to be learned but we are heading in the right direction.”
Could you please describe how it felt to switch from 4×4 to the buggy?
“There are a lot of things you have to accustom to. On nearly every terrain, the buggy must be driven in a different way than the 4×4. On bumpy roads we can drive much faster and it will take us some time to find the limit.  The speed you can drive at over bumps is just incredible. In winding sections that resemble WRC stages, however, the buggy is somewhat less precise than the 4×4. In addition, the rear wheel drive makes you slide more. But I think that we have found a good balance. In the dunes the difference is big and at the beginning I found driving over the big dunes more difficult. That could be a special challenge in the Dakar.”
What is your goal for the 2018 Dakar?
“Despite the new vehicle and although it looks as if we will spend more time in the dunes, this year, I want to fight for a podium finish at least. Andi and I are a good pairing and he is extremely experienced.”
Orlando Terranova, driver MINI John Cooper Works Rally
How do you assess the enhanced MINI John Cooper Works Rally?
“I am really delighted about the enhanced MINI as we made a real step forward. When I drove the car with the bigger spring travel and the lower weight for the first time it was a good feeling right away. The reliability is still there but the handling and the brake performance have been improved. The new suspension allows us to go faster on bumpy terrain and it also improves the ride comfort. A true advantage if you are getting a good shaking while sitting in the car for many hours.”
What is your goal for the 2018 Dakar?
We want to fight for a podium. To achieve this goal we have to be absolutely focused throughout the event and must avoid making any mistakes. This applies to both the driving and the navigating. Making it to the top three is my goal and my dream but we will have to fight hard to make this dream come true
Crews Dakar Rally 2018
MINI John Cooper Works Buggy
Mikko Hirvonen (FIN) / Andreas Schulz (GER)
Bryce Menzies (USA) / Pete Mortensen (USA)
Yazeed-Al Rajhi (KSA) / Timo Gottschalk (GER)
MINI John Cooper Works Rally
Orlando Terranova (ARG) / Ronnie Graue (ARG)
Nani Roma (ESP) / Alex Haro (ESP)
Jakub Przygonski (POL) / Tom Colsoul (BEL)
Boris Garafulic (CHI) / Filipe Palmeiro (POR)