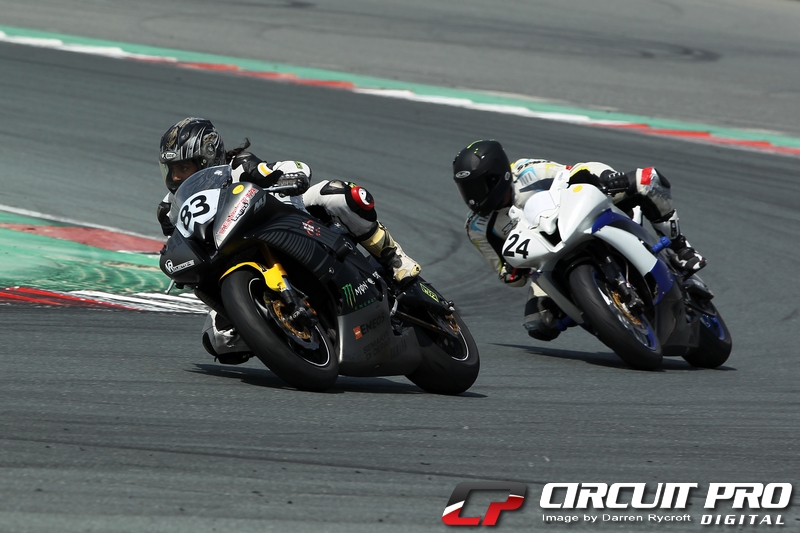 Sabah Mukri defends her position on track in race one

Race 1: This was my first time racing on the national circuit. As all the racers lined up on the grid, something felt different! I seemed completely focused; I drowned out everything else around me and wasn’t nervous at all. I said to myself all you need to do is stay with the pack, keep that throttle pinned and push past your comfort zone. I look to my left and right recognizing the racers and thought to myself GAME ON! As the red light went out, I had a really good launch; I was aggressive on the throttle as my bike pulled through the gears. I overtook the racer next to me but he out braked me entering turn one. I was determined to brake with everyone else and give it my best shot. To my surprise I stayed with the pack but that was not the only surprise I was closing the distance with same racer to my left. By the end of the first lap in the last corner I saw an opportunity to pass him. I took the inside line and caught my competitor by surprise. I held my race line and didn’t run wide and got ahead of him. Never before had I felt the pressure of keeping my position and staying ahead of a rider. By the third lap I had beat my qualifying time by six seconds. The entire race I took defensive lines wondering if he was right behind me waiting for the opportunity to get back past me. Focused on staying as smooth and consistent as I possibly could, I cleared the checkered flag for the first time I was not last! I have never had the opportunity to battle with anyone racing and was so grateful for the pressure as it made me six seconds faster so I guess that’s the push you need to improve! Pushing hard in race two to round off a great day

Race 2: I was exhausted and felt dehydrated with the afternoon heat catching up with me. I promised myself I would never again rock up to a race unfit and had a plan to get in shape over the summer. My sponsors and friends encouraged me to race the second round and give it all I could and if I couldn’t complete it at least I gave it my best.  This time I stepped on the grid with cold tyres, I forgot to turn them on. I knew already I wouldn’t be able to stick with the group as I did in the previous race but was determined not to place last. As the start light went out, with a poor launch and a hesitant hand on the throttle I was left behind. An all too familiar scene but I wasn’t about to give in so easily. I pushed hard and by my third lap I was able to close the gap. Waiting for the opportunity to pass the same racer, we both approached turn 16 together, I have no idea where I found the courage to out-brake him and entered the corner with my back tire fish-tailing behind me. I managed to get some distance from him and finished the second race three seconds slower than my previous race but again I wasn’t last.

I was humbled when my competitor came over and shook my hand congratulating me after each race. It just goes to show there is true sportsmanship at Dubai Autodrome. I am so thankful to my sponsors for their continued support Nerds Motorcycle Racing, Vendetta Racing UAE, Torque Block, Circuit Pro Digital and Pinky Furniture & Nov L.L.C.

I also would like to thank my mentor, race day pit crew and very close friend Juzar Motiwala ‘aka George’ for always having my back. I feel lucky to be surrounded by family and friends, always supporting me and making my dream come true yet again!

I will see you all again next season, faster, stronger and ready to race, bring it on… Full gas! PS: Did I mention I received my first ever trophy for the first female competitor in the DAMC Sportbike race series?